I think any fan of Japanese cinema will agree with me when I say that I want to see the world through the eyes of Noboru Iguchi. There seems to be no end to the sheer madness collecting in that brainpan of his. The biomechanical butt bonanza that is this man’s imagination achieved international recognition with 2008’s The Machine Girl, and then the party started. The releases of RoboGeisha and Mutant Girls Squad in 2009 and 2010, respectively, continued to test the boundaries of good taste, or “taste” at all for that matter. But hey, this is Gonzo Grindhouse! The last thing you expect from a lunatic like Iguchi is that he tone it down!

Well, he did. The result, Karate-Robo Zaborgar, is his most accessible – and dare I say fun – film to date. 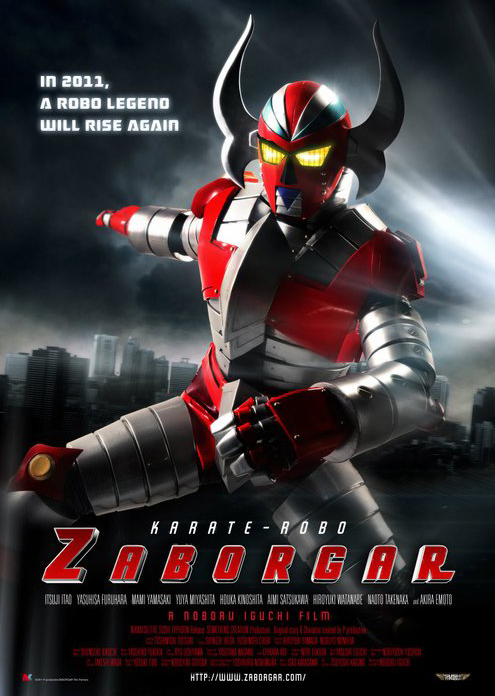 A film in two chapters, Karate-Robo Zarborgar is a reimagining of the 1970s’ tokusatsu series, Denjin Zaborger. The film follows secret police duo Daimon and his karate motorcycle robot (read: only friend), Zaborgar, as they fight to take down the evil Sigma crime syndicate. Sigma is stealing the DNA of Tokyo’s smartest and most influential citizens in order to build a – you guessed it – giant biomechanical robot that will destroy the world. Yet underneath its goofy aesthetic it is also an ironically emotional examination of filial love, reconciliation and rebirth.

Robot battle after robot battle, Chapter One is a hilarious, beat-for-beat homage to the original series as young Daimon (Yasuhisa Furuhara) and Zaborgar’s battle to restore righteousness to the world pits them against sexy Sigma right-hand woman, Miss Borg (Mami Yamasaki), and a nonstop onslaught of robot baddies. True as it is to its source, every scene is vintage Iguchi. From the Diarrhea Robot to the flesh-eating butt dragons of the Miss Ruggers girls (a trio of sexy, super-powered, rugby-themed cyborgs led by none other than Asami), it’s karate-a-go-go and it couldn’t be more fun.

But Daimon has issues. He’s hyper-emotional, believes he is doing the Lord’s work and his only friend is a robot. So, when the love connection between him and Miss Borg really heats up, it naturally follows that he loses everything – even Zaborgar.

Chapter Two picks up 25 years later. Daimon, now played by Itsuji Itao (Tokyo Gore Police, Big Man Japan), is all but forgotten. Washed up, diabetic and tiredly holding on to the past (25 years and he’s still wearing his helmet), he has nothing. And to make matters worse, Sigma appears to be winning. The righteousness he fought for is as much an afterthought as he is. Iguchi takes a breath in the second act to examine dysfunction within and without the self. Parental issues touched upon in the opening chapter come to the fore, as do the problems of coming to terms with physical and emotional weakness. And it’s well done. Chapter Two is a surprisingly engaging black comedy that convincingly leads the audience through the personal trials of a has-been.

But purists, fear not, for catharsis comes on the shoulders of a giant, hormonal schoolgirl robot. Literally.

For all of the credit due Iguchi, someone has to bring his idea to life, and once again that man is special effects juggernaut Yoshihiro Nishimura (Tokyo Gore Police, Vampire Girl vs. Frankenstein Girl). In the past few years the two have become quite the tag team, yearly outdoing themselves, and Karate-Robo Zaborgar is no exception. Combining live action and CGI, Nishimura’s effects lend legitimacy to the film’s classic aesthetic, which he and Iguchi clearly took pains to meticulously recreate.

While Karate-Robo Zaborgar may not be the gonzo splatterfest fans have come to expect from Iguchi, don’t panic – the film has its moments, but at heart it’s an honest piece of fruity nostalgia, a well done “Thank You” to tokusatsu. And it speaks volumes for Iguchi as an artist, who in keeping himself in check (sort of) can still release a superior film. It makes you want to dig even deeper into his mind and perhaps find out what truly inspires him.

So what if this year’s schlock is only semi-pervy?