Don’t get me wrong – I am excited that people are excited about the third installment of Christopher Nolan’s Batman movies, but the frenzy over the release of the teaser poster for The Dark Knight Rises today seems over the top.

Teasers and PR hype have long been a subject of grousing behind the scenes at Unwinnable and we tend to agree with comic book writer Ed Brubaker, who recently posted on Twitter (@brubaker), “I’m surprisingly not that excited about the Hobbit movies. Wish they’d keep the curtain closed until the movie’s out. Too much PR burnout. I’ll be there to see the movies, of course, I’m just a bit tired of hearing about them for the last four years already.” 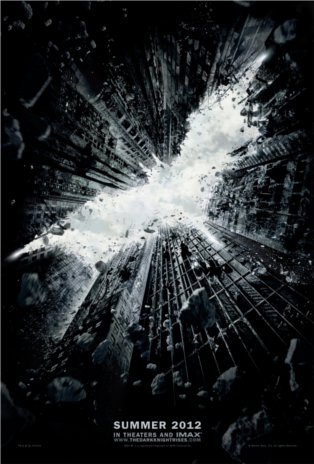 “I just hate when they tell us so much ahead of time and all the advance behind the scenes stuff. Remember the Matrix teaser ads? They didn’t tell you anything about the movie at all. Or Inception? I knew almost nothing until it was out. And yet both managed to do the exact right amount of PR not too far out from the actual release date.”

“I just hate to see movies I should be excited for giving me PR fatigue, you know?”

We couldn’t agree more. The hullabaloo around the Dark Knight Rises teaser poster is an excellent example of this. Sure, plenty of people, including this writer, are extremely excited about the prospects of this film, but even the most outrageous movie poster isn’t something to start frothing at the lips for.

And this poster isn’t the least bit outrageous. It is a natural evolution of the previous Nolan Batman film poster aesthetic that also visually references last year’s Nolan hit, Inception. It’s a bat symbol and some crumbling buildings. Cool – but nothing to riot over.

We are a year out on this thing and nowhere near the promotional fever pitch, and yet I already feel like I can sketch out a rudimentary plot line for the movie. I don’t care about spoilers in the least, but I do want to watch a movie on its own terms and not have it revealed through advertising in dribs and drabs years before the final release. That’s just no fun at all.

But so it goes. The PR/entertainment media nexus will churn, creating ever more anticipation at almost any cost. Anything to get bodies into those theater seats, preferably IMAX theaters, with 3D glasses.

If I were Anne Hathaway or Tom Hardy, I’d be on the lookout for Warner Brothers assassination squads as soon as principal filming wraps.

Stu Horvath fully expects you to be cross with him (and point out that negative coverage of something is still coverage). You can call him an idiot @StuHorvath on Twitter.

The Sound of One Hand Playing – L.A. Noire