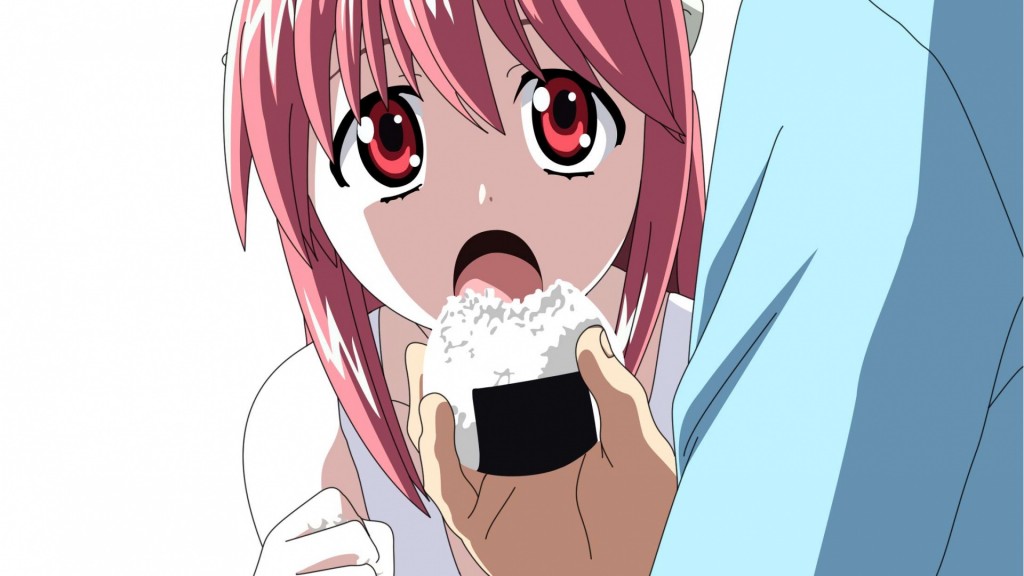 Just before PAX, we took a look at Kino no Tabi and its place among the few anime that could be deemed feminist. We concluded with the promise of violence–a promise I fully intend to keep as this week we take a look at Kanabe Mamoru’s Elfen Lied, a brilliantly violent series based on the manga by Okamoto Lynn that is either the most profound or most offensive feminist statement in anime. A bit of plot summary can be found in my Elfen entry on underappreciated anime. For our purposes here, we’ll dive right in.

It’d be tough to argue that Lucy/Nyu is Elfen Lied’s main character, putting it at odds with last week’s look at Kino. Despite the fact that Lucy is the first central character we encounter (the first character we encounter is female, but she’s a bit of klutz and Lucy twists her head off and uses her body as a bullet shield in the first five minutes), it’s Kohta who wrests the spotlight from her as we’re plunged deeper into the mysteries of his past.

That the show doesn’t post a female character at dead center, it turns out, is actually part of the feminist statement that might be in the works. Lucy’s massive regression to a childish, even animalistic, whelp trapped language-less in a very well-proportioned body, further travels down this strangely feminist road. 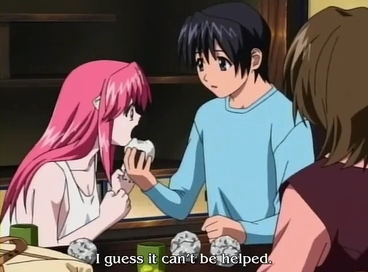 Let me draw a clarifying parallel: The heyday of American cinema was absolutely riddled with violence. Films like Taxi Driver, The Godfather and Bonnie and Clyde used excessive violence to make statements about violence itself, often about the violence of war in particular. Along these lines, we can view both Lucy and Nyu as critiques on the mutually exclusive, dichotomous extremes applied to femininity (even the name given mutants with Lucy’s abilities–Diclonus–seems to share an etymology with dichotomy).

Nyu is every otaku boy’s wet dream: over-sexualized, completely dependent on her closest male connection and incapable of communicating anything but basic needs and emotions. Lucy, on the other hand, is both that same boy’s worst nightmare, and what he’s liable to think of any woman that challenges his personal sense of authority, even in the slightest: independent, capable, hateful if not emotionless and terribly cruel.

It’s important that we realize Lucy’s cruelty is neither a result of her femininity, nor a summary of her personality. Lucy and Nyu are two psychological extremes of the same person, the latter presumably arisen how so many secondary personalities arise, as a compensatory denial of and/or escape from past trauma. As a young girl Lucy was capable of both independence and love, resorting to violence only to protect that which she cared for. But she possessed a power that she didn’t entirely understand, and when driven by isolation and fear beyond the bounds of humanity (starting to sound like the plight of women yet?), she responded with terrible, uncontrollable violence against her only community.

So much of this kind of criticism is itself criticized for wanting to read meaning where there is none. South Park brilliantly satirized this with the public debate over the meaning of “The Tale of Scrotie McBoogerballs” and its thrilling sequel “The Poop That Took a Pee.” And as much as I want to believe that Elfen Lied is, in fact, a statement about the deeply misdirected, unethical categorization of feminine behavior, there is one variable that foils my argument. Fucking Yuka. 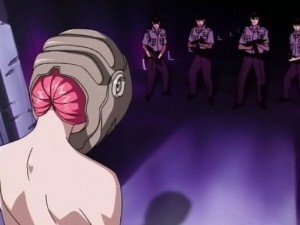 Yuka, Kohta’s cousin and housemate when Kohta comes back to attend the college in her city, is the show’s best opportunity to showcase a female character of independent strength and emotional range. Instead, the creators are content to make of her a lovesick fool who sacrifices the quality of her education to pursue a childhood romance with a boy who does little more than make her cry throughout the series. Her incessant weepiness and inability to communicate her feelings display enough crass unfamiliarity with femininity to lead me toward one of two assumptions. Either the creators spent so much time analyzing femininity through Lucy/Nyu that they forgot to meaningfully develop other characters, or the whole feminist angle present in Elfen Lied is actually just in my head.

I suppose the only thing left to do is build a consensus. Please, watch the show and tell me what you think. I’ve sat through this glorious display of blood and violence and rape and animal cruelty many, many times. Still, I can’t quite figure whether it’s a shining example of how anime has become conscious of its most common shortcomings, or it’s just bloody, sexy otakuservice. Either way, it’s worth five hours of your time.

If you love to see anime jojo’s bizarre adventure is one of the best anime/manga ever, with some amazing fights and extremely unique powers.

Will this be the last part of a riveting series? Follow Daniel Imperiale on Twitter to find out!