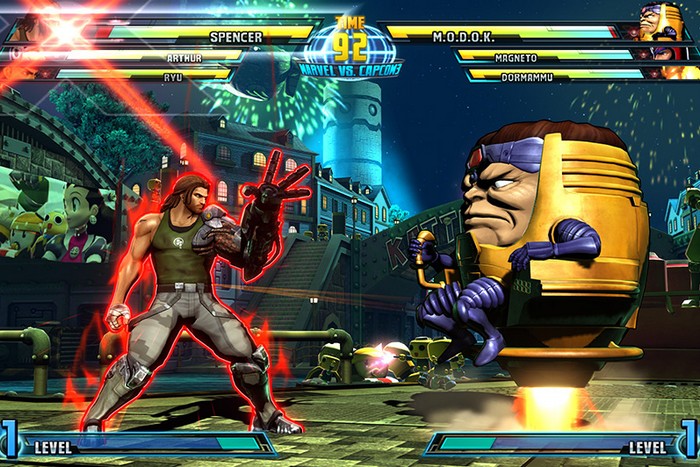 Ash Wednesday may be upon us, but that doesn’t mean Team Unwinnable will shy away from beating each other senseless with Berserker Barrages and Hadoukens.  See, we can only fight each other, because everyone else online will kick our geezer asses in Marvel vs. Capcom 3.

Ian Gonzales: I’ve been playing Marvel Vs. Capcom 3 for a few weeks now and the game is a blast!  I love playing online against friends for fun and playing offline against the CPU so I can get some endings.  So far, I’ve only seen Doctor Doom’s though, so I must not be putting as much time in as I should.  Galactus is HARD!  The only thing that bugs me, and this is across the board for fighters and first person shooters, is that there doesn’t seem to be a functional tiered system for new players.  Marvel vs. Capcom 3 does have an option to create a tiered room, but more often than not, it tells me there aren’t any players available.  Now, I don’t know if this is a glitch or if no one wants to play as a ranked beginner, but I am sick and tired of getting paired up with someone who knows how to use Deadpool, M.O.D.O.K. and Viewtiful Joe as the perfect killing unit. I want to fight someone like me, who’s trying to figure out X-23 or Wesker.

Stu Horvath: I haven’t played MvC3 yet, but I sympathize with Ian. Way back when, Chuck and I played a lot of Soul Calibur 2. On one fantastic night (fantastic to me, anyway) I crushed Chuck something like 25 matches to 4. I considered myself a pretty competent player, especially with Mitsurugi. Until I played SC4 online and some 10 year old savant whipped my ass in less than 16 seconds.

The same basic scenario plays out whenever I try most multiplayer involving guns. At least the Soul Calibur Kid didn’t say anything mean about my mother or accuse me of enjoying the company of men.

Pete Lang: Marvel vs. Capcom 3 makes me cringe. The advertisement alone seems to carry the personal leitmotif “You, Peter, will never be good at this.” Fighting games have become so loud in their approach. It’s a crowded experience that leaves me feeling claustrophobic at best. As a result, the learning curve is so steepened that anyone new to the game will feel like a droopey-eyed, armless child while having their ass repeatedly handed to them. There’s no room to pick up the nuances of the game (not to mention breathe) as one is pounded by this game’s visual death-grip. My heart bleeds for any epileptic that has to play this game.

John McGuire: I have never been good at fighting games. Regardless of how many people explained the moves to me (half circle-back and what not) I have just never gotten it. That being said I enjoy playing fighters because more often than not I have that idiot savant moment where it all clicks and for a moment, I can beat the shit out of a seasoned vet by just smashing buttons. I have long since given up on pumping quarters into machines and buying the new games (like Marvel vs. Capcom 3), but I’ll always enjoy the wildcard moment of beating the pro’s with luck.

Chuck Moran: Anytime, Horvath, I will rematch you in Soul Calibur 2.
Marvel vs. Capcom 3 gameplay is button mashing crap!I played and was way to good at it. That shouldn’t happen. I am a terrible Street Fighter player. Marvel vs Capcom 3 is the tee ball of fighting games.

Richie Procopio: I used to really dig fighting games back in the days of Street Fighter 2, Mortal Kombat and the first two Soul Caliburs.  The games that come out today, however, have these combo lists that I just know I can never pull off.  I can print the move list…stare at it for 15 minutes trying to memorize it and even still, I’ll never pull it off.  Playing friends casually is still a ton of fun, but online play without factoring in skill levels = teh suck!

As far as fighters are concerned, I currently own MvC 3 and thinks it’s possibly the greatest current generation 2D fighter. However, the controls are a bit dumbed down. So in respect to tiering, this game is already in the favor of the button masher. Unfortunately, these fighters will never compare to the time when they were upright. For me, arcades defined the fighting genre and the home versions can’t recapture that experience. In regards to shooters, Halo seemed to be one of the few games that matched players according to skill levels. I think that is a good system and could attract new and casual players to the genre.