I work at home. Three feet away from my desk sits a 12″ VHS combo TV from 1992 and several outdated consoles. Two, maybe three days a week I play a game on my morning break. Some times I play a familiar favorite, other times a game I’ve barely heard of. I might start from the beginning or load up an old save file. Occasionally I write about them for Unwinnable. It’s not about nostalgia or some naive notion about the “purity” of old games. It’s also not just about having fun. I want to see how these different games from various times fare against both their contemporaries and the games of today.

It’s time I made it to the top. 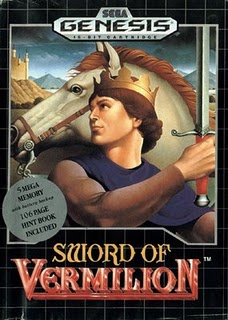 I. Sword of Vermilion arrived with one promise: it took care of what Nintendoverlooked. Sword of Vermilion paid up on time, while Nintendofaulted on every bill. Sega brought the RPG to North America in 1991 during the obnoxious “Genesis Does What Nintendon’t” advertising campaign, which made Sega look petty and insecure and played a part in my decision to get a Turbo-Grafx 16 instead of a Genesis.

Sword of Vermilion wasn’t the smartest game to highlight in those commercials. It received mediocre reviews then and is a downright bore to play today. There were a number of excellent RPGs for the Genesis, and Vermilion was released within a year on either side of three of the best, Phantasy Star II and III and Shining in the Darkness. Eventually I owned a Genesis and enjoyed all three of those other RPGs, but steered clear of Sword of Vermilion until a few weeks ago. I found a game so boring that it took me three months just to muster up the patience to write about it. 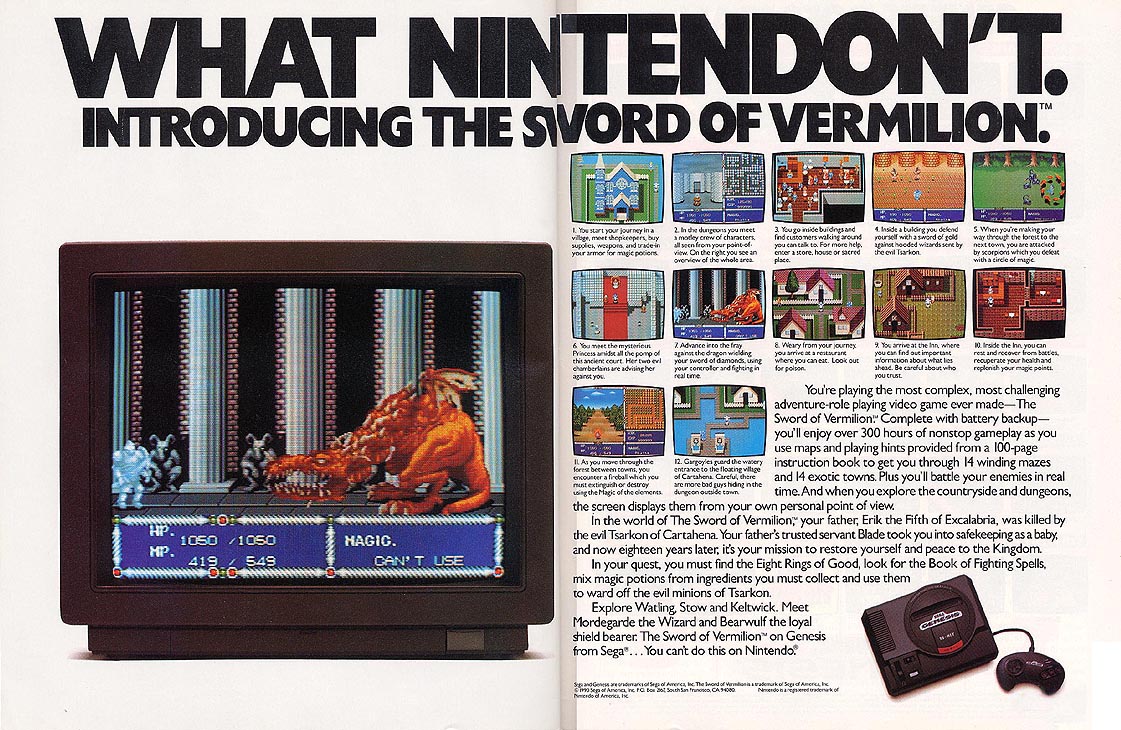 II. So there’s this sword stuck in a really big stone. Well, the sword may not be stuck; there’s no telling how tight the stone’s grip is. But a good chunk of the sword is definitely hanging out inside of that rock. The stone’s on a plot of ground that’s quickly flying over a thick bed of grey and purple clouds. Or maybe the land hovers still in the sky while clouds move fast below. Either way it’s King Arthur at 20,000 feet. It’s also Sword of Vermilion‘s title screen.

Press start and you’re hit with story. Some jerk called Tsarkon (of the Cartahena Tsarkons) busted into Excalabria (aka Excalibrah‘s hometown) and killed King Erik V dead. The V-Man fobbed his firstborn Gary (or whatever name you pick) off on his right-hand fella Blade, who just barely made it out of the castle before it burned to the ground. Blade raised the li’l scamp as his own, and now that he’s eighteen Gary is ready to learn the truth.

That bit of storytelling magic comes to a close and leaves me standing in a small town. The overhead view looks like Phantasy Star or Final Fantasy or almost every other role-playing game of the ’80’s/’90’s. People wander about perfectly straight streets and single-room buildings while repeating themselves endlessly. Immediately somebody tells me my dad is dying. Not my real father the King, who’s been dirt since chucklehead days, but his buddy Blade who I’ve been calling dad all this time.

I reach my dying fake dad just in time to borrow some cash. Since this is a RPG from the 1980’s, the money shares its name with an old jazzman, like Chet or Chick or Bix.

Before I even put my dad in the ground a cranky old man tells me that, despite maybe looking like normal people, all our enemies are actually evil monsters. Apparently the Tea Party started in Excalabria. 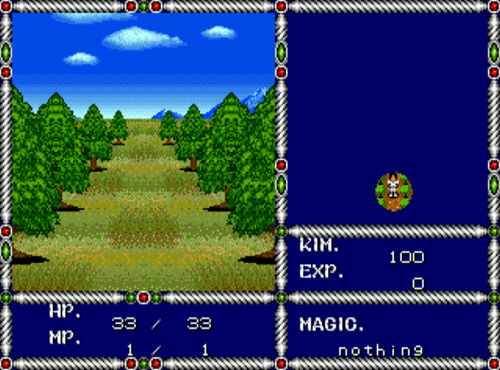 A few moments later a yokel hands me a map. I couldn’t leave the town without it, but now I can explore the wider world. Once outside the town the view changes dramatically. The screen is split into various windows. On the left is a first-person screen that looks like Wizardry or Might & Magic. The HP and MP information sits on the bottom left. The map takes up 2/3rds of the right half of the screen, with money, experience, and magic tracked in two windows below. It’s cluttered but not confusing.

My leisurely ramble from one screen to the next is randomly and repeatedly disturbed by dickheaded creatures like slimes (here called jellies) and kobolds. These encounters switch to an angled overhead perspective similar to old Zelda games. Also like Zelda the combat is direct, with none of the turn-based, menu-heavy RPG scuffling I expected. When I want to kill a thing I do it myself instead of fiddling around with a list of options. And I do want to kill things, including every last slime that bounces my way.

Eventually I find the cave that houses something called the ring of wisdom. It’s a first-person dungeon that’s entirely black unless you have a candle. You’ll need several candles in your rucksack, as they burn out quickly.

A candle only illuminates a small portion of the dungeon map. It’s easy to wander in the wrong direction and hit dead ends. Monster attacks are even more of a surprise without the light. Battles start piling up, along with the spoils. I defeat a band of kobolds and discover a treasure chest full of money. After killing some skeletons I find a second map. Elsewhere I come upon a healing herb.

Suddenly my candle blows out. I fumble through the dark, trying to retrace my steps back to the entrance. Along the way a pack of kobolds sets upon me. The dog-like beasts circle in, bumping into me until I die.

Moments pass. My eyes suddenly open. Somehow I’m not dead. Or perhaps this is the afterlife? If so then Sword of Vermilion‘s afterlife is exactly like its life. I realize I’m at the church I ignored in town. The vicar restored me to life but at a cost: I have to donate half my money to the poor. Now I feel like a Tea Partier. 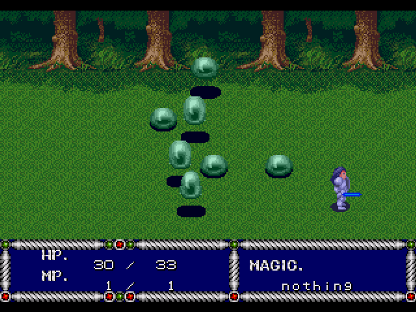 III. I could go on. I played a little bit past my holy resurrection, determined to complete at least the first dungeon before heading back to work. It felt like taking the final to a class I had already dropped.

Sword of Vermilion is not what we in the biz call “a good game”. It cobbles various systems and mechanics from better and more memorable RPGs into a tedious and personality-free mess, and then wraps it all within a generic fantasy story about evil monster wizards and surprise royal birthrights. It’s as thoughtful and inspired as a Seth MacFarlane cartoon.

Still, I would have played this when I was twelve. I would spend dozens of hours on mediocre role-playing games like this simply because I had nothing better to do. Even smart kids are dumb when it comes to time management, or at least the awkward and lazy ones are. And I’m sure I’d be more conciliatory today if I had a past with this game. Sword of Vermilion earned its fate as a footnote, though; without those ads it probably wouldn’t be remembered at all.

Sonic Mania is the Apotheosis of Fanmakes

What’s a Little BFing between Friends?