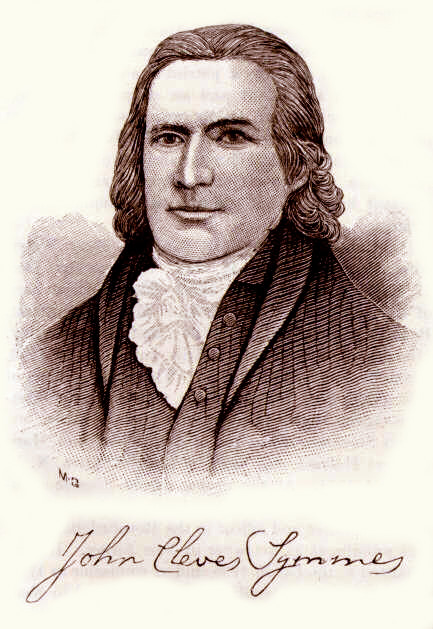 I declare the earth as hollow and habitable within containing a number of solid concentrick spheres, one within the other, and that it is open at the poles 12 or 16 degrees; I pledge my life in support of this truth, and am ready to explore the hollow, if the world will support and aid me in the undertaking.

The above statement was boldly put forth in Symme’s 1818 Circular No. 1. Sent to men of science in both America and Europe, it comes as no surprise this little missive was met with more criticism than endorsement. However, this brief proclamation is not undeserving of merit. As author Duane A. Griffin points out in his paper, Hollow and Habitable Within: Symmes’s Theory of Earth’s Internal Structure and Polar Geography,  Symmes offered “an original and wholly American theory of [the] Earth’s structure and geography.” To take this notion one step further, Circular No. 1 posits a pseudoscientific concept that has influenced science fiction as much as it has (if only by accident) explorative curiosity.

Novel as the idea was, all reports and criticism prove it to be purely speculative. Symmes manipulated established proofs of the Earth to fit his model. Griffin offers this explanation of the said research stating that Symmes:

displayed a prodigious talent for devising ‘proofs’ for his theory by

shoehorning information from his extensive and often idiosyncratic

observations, descriptions of the Megellanic clouds, the aurora borealis…

temperature distributions, purported animal migrations and even the

From this “Symmes found confirmation of polar openings” (ibid). Despite his dubious studies, his support base included a world renowned doctor and an ambitious newspaper man. Had this not been the case, Symmes, along with his theory, would have faded quickly and quietly from memory. 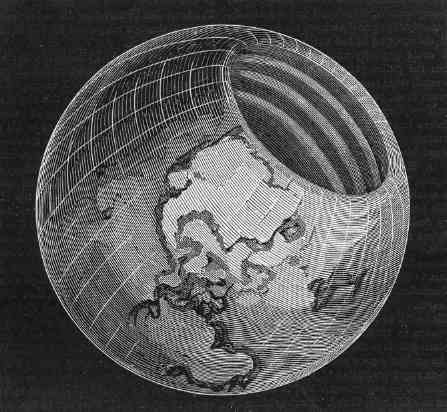 Thankfully, due to intense dedication and persistence (then President John Adams was ready to sign off on an expedition to explore the poles), Hollow Earth Theory still exists on the fringe of pseudoscience. The most noteworthy book on the subject, Dr. Raymond Bernard’s 1969 study The Hollow Earth, attempts to emphatically revive Symmes’ idea almost to the letter. Beginning with Rear Admiral Byrd’s 1947 and 1955 polar flights, Bernard moves on to list what he believes to be irrefutable evidence that the Earth is not only hollow but populated by a race of Supermen. He also “proves” that UFO’s are not extraterrestrial. Die Übermenschen are the true originators of flying saucers.

In 191 (oftentimes exhaustively repetitive) pages Bernard offers proof that the North and South Poles do not exist. In their place are actually two holes which serve as openings to the Earth’s hollow interior. Byrd, he semantically argues, flew into these openings and not across any respective pole, discovering a lush, inhabitable utopia quite contrary to the sub-zero wastelands we are led to believe exist to the extreme north and south of the planet. There exist no pictures and no documents of Byrd’s accidental discovery. Instead Bernard relies on the Rear Admiral’s statements as follows:

That  area beyond the pole is the center of the Great Unknown.”

MARCH, 1956:  “The present expedition has opened up a vast new

“that enchanted continent in the sky, land of everlasting mystery!” (15-6)

From this Bernard believes the following truths to be  self evident:

1. There really is no North or South Pole. Where they are supposed

2.  Flying saucers come from the hollow interior of the earth through

3. The hollow interior of the Earth, warmed by its central sun (the

degrees in temperature, neither too hot or too cold.

4. Arctic explorers found the temperature to rise as they traveled

north in winter…when they should have gone south; they found the

compass needle to assume a vertical position instead of a horizontal

other insects in the extreme north…they found the snow discolored

by colored pollen and black dust, which became worse the further

north they went. The only explanation for this is that this dust came

from active volcanoes in the polar opening.

5. There is a large population inhabiting the inner concave

surface of the Earth’s crust, composing a civilization far in

advance of our own in its scientific achievements, which

probably descended from the sunken continents of Lemuria and

Atlantis. Flying saucers are only one of their many achievements.

human race, learn from them and receive their advice and aid.

6. The existence of a polar opening and the land beyond the

Poles is probably known to the U.S. Navy in whose employ Admiral

All of this is exposed in an entertaining and quite fascinating little book. To its discredit, the only cited sources are extremely rare books on the subject and a UFO magazine. All evidence as to the environment of the Polar regions (which form the core of his scientific data) are from questionable reports of arctic expeditions. Any analytic mind will recognize the study is fundamentally flawed and best suited for utopians, conspiracy theorists and fiction writers.


Indeed, it is the world of fiction that has allowed Hollow Earth Theory to survive the 19th Century. Almost immediately after Symmes Circular No. 1 authors incorporated his ideas into their work. The earliest appears to be Symzonia; a Voyage of Discovery by Adam Seaborn, written in 1820. Both the authorship and motive of the book is debated. Attribution has been given to Nathaniel Ames who, under pseudonym, wrote the book as a work of satire. Others seem to believe it to be authored by Symmes (who surprisingly never wrote a complete work on his ideas) and some modern editions carry his name. The following is a short list of works that employ Symmes’ theory throughout the 1800’s:

Edgar Allen Poe, M.S Found in a Bottle and The Narrative of Arthur Gordyn Pym of Nantucket, in 1833 and 1838.

Edward Page Mitchell, The Inside of the Earth and The Tachypomp, in 1876 and 1874, respectively.

A Story Sure to Mock


Edward Page Mitchell’s The Inside of the Earth: A Big Hole Through the Planet from Pole to Pole is a short, satirical piece in which a Sun reporter interviews a sailor who, based solely on visions, is sure the Earth is hollow. In the text, written as if it were a piece of serious journalism, the sailor demands a fake name, “Claltus,” admits to have never personally traveled to the openings and offers his interviewer little more than second-hand stories and hearsay. The reporter prompts the man with definite questions to which he receives indefinite answers. Claltus’ “evidence” has curiously been stolen yet the man consistently and unreasonably clings to the belief that “it stands to reason.” The piece is interspersed with headlines such as “What a Sailor Said He Saw”, and “Surely Hollow,” further adding a bit of sarcasm to the work. This stylistic approach allows The Inside of the Earth to double as fiction and as editorial.  As a result, Mitchell exposes Hollow Earth Theory for what it is – baseless.

Griffin is correct in citing Symmes’ theory as wholly American. Beyond science, Hollow Earth Theory represents a new frontier, a place of discovery and potential danger that continues to exhilarate readers and remains a staple of American literature. The idea that worlds exist on the inside of the Earth has circulated in some form for thousands of years, but it is the push to explore, to throw oneself into some great unknown – from the Wild West to Star Trek – that Americanizes it. Symmes’ theory influenced Edgar Allen Poe who in turn had a like effect on both Jules Verne and Edward Page Mitchell. Neither Symmes nor Poe wrote science fiction, but their resonance extends into the genre, further strengthening its American roots.

Read the previous installments of Peter’s investigation into the roots of science fiction:

The Man that Time Forgot: Edward Page Mitchell and the Burden of Anonymity

Tracking the Invisible Man: The Man that Time Forgot – Part 2