1. The museum catalog from the Treasures of Tutankhamen exhibit has been floating around the house since my parents went to see the travelling tour at the Metropolitan Museum of Art in 1979. The book is filled with photographic plates, some in color with a deliciously retro quality, detailing the art objects in the show. Two threads compete in my perception of Egyptian art, springing directly from this book: the sumptuous beauty, bedecked in gold and jewels, and the alienness of its flatness, its elongated proportions, its geometry. Many of these artifacts I had only seen in photos were at the Franklin Institute in 2007 – the memory of their impossible beauty in person feels more like a dream than real life.

2. The Ancient Egypt volume of the Time Life Great Ages of Man series had many more examples of art, but the photographs of temples and ruins are what stuck with me. In feats literally monumental, the ancient Egyptians remain unmatched. Many trips to the Met to see their collection of statues and the Temple of Dendur have reinforced this. They are small by ancient standards, but humbling. In the back of the book, there is also a gallery of line drawings of the major Egyptian gods – my first introduction to that animal-headed pantheon (and probably the gateway drug for Dungeons & Dragons’ Deities & Demigods).

3. When I plucked Masks of Nyarlathotep off the shelf of the Waldenbooks at the local mall in 1990, with no real understanding of the Call of Cthulhu roleplaying game and only vague notions about the work of Lovecraft, it delivered much of the mystery of Ancient Egypt previously promised by legends of Tutankhamen’s curse and the Karloff Mummy movies. This is Egypt through the pulp lens – slightly racialized, thoroughly exoticized – full of mad gods, bloodthirsty cultists and a good number of fezes. Though set in the 1920s, the shadow of the Black Pharaoh that stretches across the centuries is an apt metaphor not just for the influence of ancient Egyptian culture on Western civilization, but also the West’s perception of Egypt as a place of wonder and splendor, of decadence and deviance.

Taken together, the vision of ancient Egypt that lives in my mind is one of a desert split by a single fertile river valley and pockmarked with canyons only inhabitable by the dead. The people are either poor farmers, scheming priests or decadent royalty, but all are obsessed with death. So much so that their primary accomplishment – until Hellenistic and Roman ideas were introduced at the sword points of conquerors – was in creating tombs that exist on a scale unrivaled anywhere in the world, even thousands of years later.

That is a very one-dimensional view of a civilization that lasted thousands of years. I know it is not true. In fact, I know a great many facts that refute that picture. Yet the idea of Egypt as a setting rather than a place endures as my first thought of the region – a barren desert, full of hidden treasures, which breeds villains of a swarthy sort. Heroes aren’t born in Egypt, they just go there for adventures. Such is the power of 200 years of less-than-nuanced depiction in popular culture. Worse, that one-dimensional Egypt can, and often does, still thrill me. 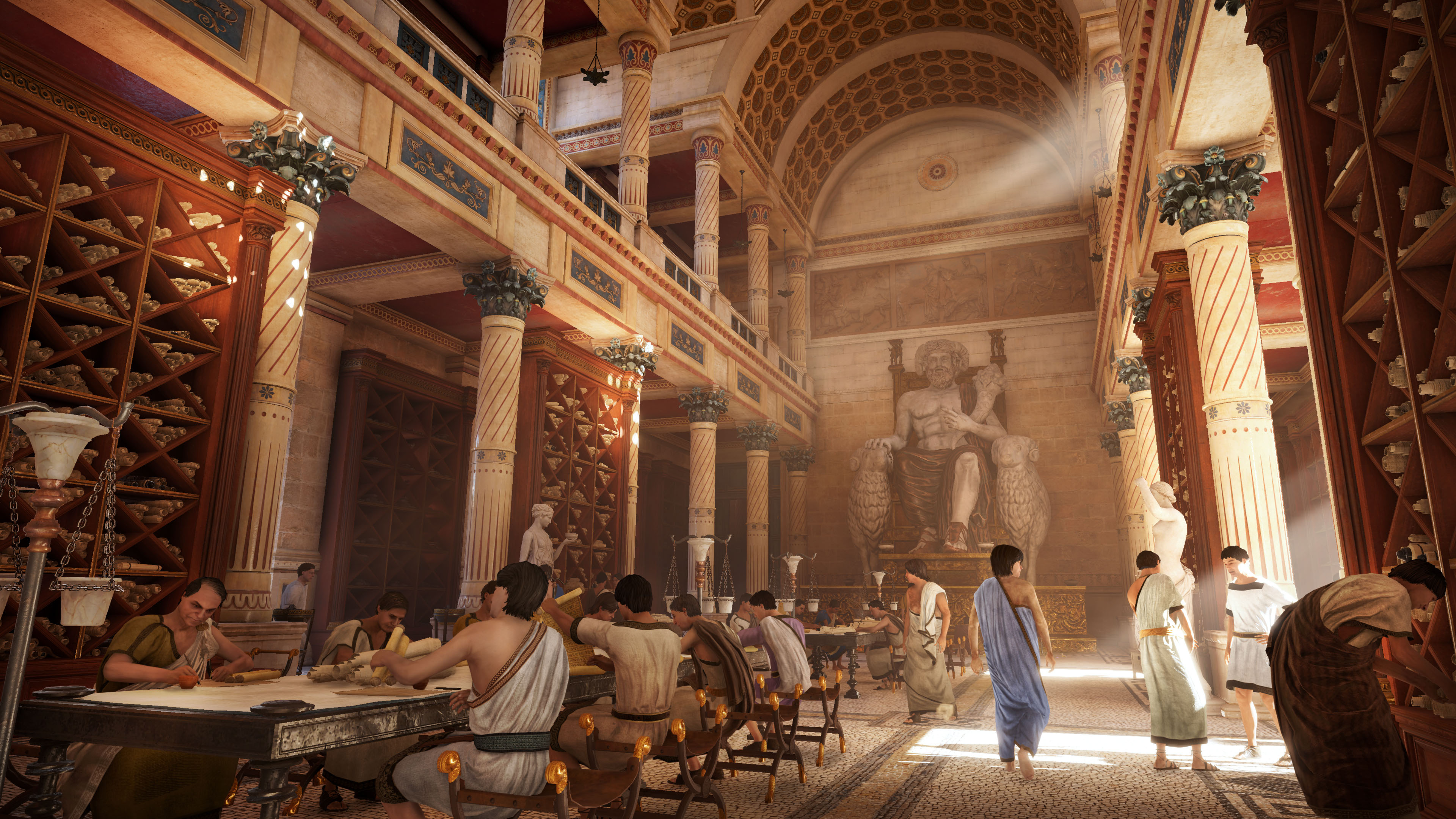 Take Raiders of the Lost Ark as an example. With the exception of Sallah (who is played by a Welshman), the only Egyptians of import in the movie are the mummies that harry Indiana Jones’ escape from the Well of Souls. Egypt is merely a backdrop for a conflict between Americans and Nazis; a stylish skin for MacGuffins. I am aware of this; Raiders of the Lost Ark is still one of my favorite movies.

Assassin’s Creed Origins might have changed that for me. Everything I mentioned – the monuments, the bejeweled art, the pulpy action – is still in there, but the developers at Ubisoft (admittedly, a company based in Montreal, Canada, but also one that goes to pains to stress the diversity of its staff) have made an obvious effort to reframe them in something that is, if not more realistic, at least more reflective of the lived-in world.

Set in the late Ptolemaic period, this Egypt is a melting pot of cultures born of both war and commerce. There is tension between the north, Hellenized three centuries earlier by Alexander’s liberation of the country from the Persians, and the south, which maintains connections to older, Dynastic traditions. People of many colors and creeds walk the streets of Alexandria and beyond. And, where ancient Egyptian religion is to the modern mind an abstract thing colored by fantastic notions about their animal-headed gods, in Assassin’s Creed Origins, religion and life inextricably intertwine. People high and low petition the gods for everything from matters of state to the most mundane tasks of daily life.

Origins makes ancient Egypt breathe in that special way only videogames can. Leave the game’s story (an excellent one, by the series’ standards) to one side: by simply wandering the countryside – a terrain much richer than the windswept place that exists in my mind – and seeing the digital simulacra going about their business is enough to make me reconsider all my pre-conceived notions. I have no idea if the game’s take on Egyptian life or religion is accurate, but that’s hardly the point.

The Egypt of Assassin’s Creed Origins is obviously fictive. I know that, for game design reasons, its dreamlike landscape is a representation, not a recreation, much the same way I know my knee-jerk pulpy visions of the country and its culture are a construct born of impressions rather than facts. Rather, it is in the sharp contrast between these fictions that the truth exists. Not an objective truth about ancient Egypt, but a truth about how we perceive the world that lies outside our direct experiences.

That world is complex and, to those not living in it, maybe even impossibly remote. The maxim of the titular creed begins with, “Nothing is true.” Within the game’s mythology, it means to reveal that the world we know is an illusion, but now I prefer to read it as an exhortation to continue learning at all costs. Even if the objective truth, about ancient Egypt, about anything, is unknowable, that doesn’t mean we should stop searching for it.

Jigsaw’s Twist is a Celebration of a Returning Franchise