There’s this really interesting thing that happens when you consume media when you’re trans: at some point, everything you love decides to tell you it hates you. TV, movies, games, creators you admire—at some point they all make some kind of trans joke. In the best cases some apology is made; in the worst ones, the joke-teller digs in and rages at people’s offense, turning your hurt into their own. For me, it doesn’t even matter what the joke is, or if it’s even “that bad.” It’s that moment, that inevitable reveal, that reminder you that the things you enjoy will never, ever be for you.

I don’t play a lot of AAA. There are plenty of justifications – money and time – but the less economical truth is that I don’t like them very much—or, rather, that they scare me.

Of course a lot of AAA is changing: we have gay relationships in Mass Effect, a trans character in Dragon Age: Inquisition. But these inclusions don’t do much for me. A single trans character feels worse than none at all, failing to recognize that trans people know other trans people, repeating the story that we all end up alone. 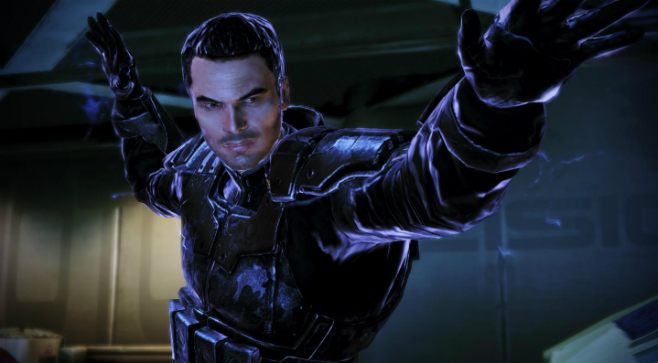 Gay romance options feel like all the stories that tell me being queer is about who I sleep with, that otherwise I’m “just like everybody else.” I applaud these efforts and the positive changes being made to include more diversity in AAA, but they still feel hollow, marketing tactics rather than substantive progress. At the end of the day they feel like what someone else thinks I should want, highlighting that AAA games are for other people who have to go out of their way to make room for me, that I’m not their intended audience and should be grateful for what I get.

Last summer, a friend bought me Saints Row IV to alleviate the stress of moving. I didn’t know much about it besides my friend Todd Harper’s love of it; I thought it was some GTA knockoff I didn’t have much interest in. A few months later, languishing under a bad mood, I booted it up in search of a mindless shooter. I was shocked by how hilarious the opening was, delighted by the cheerful relationships between the characters, but as the game wore on I found myself waiting for the moment it would all go wrong. Look at this game, I thought. There’s going to be a trans joke, there’s going to be a sexist joke. There’s gotta be. There’s always something.

Todd Harper has written at length about why Saints Row IV is good, but my favorite thing about it was that it let me play too. It didn’t alienate me, but it didn’t necessarily cater to me either; it just assumed someone like me was playing it. Its jokes were big-hearted and ultimately kind, never at 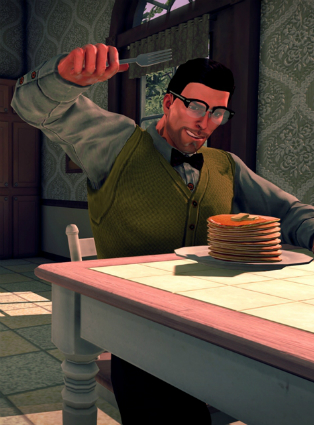 anyone’s expense. There’s queer content, but it’s not bracketed out or touted; it’s just there, side-by-side with a big, silly world to explore and explode. As Todd points out, it’s a game about play, but it didn’t give me my own special toys—instead, it plopped down next to me and offered to share.

I had a similar experience last week with Wolfenstein: The New Order. Same story: a game I had no interest in, bought for me by a friend, my only knowledge of it that Javy Gwaltney refuses to stop raving about it, booted up to alleviate my sadness at being sick on New Year’s Eve. An hour in I was delighted; head over heels with this goofy, almost criminally earnest AAA shooter.

BJ Blazkowitz is ridiculous and masculine and tired and kind, helping his comrades find their lost possessions and reminiscing about his past, reducing me to handclapping laughter when he swore at the moon. Wolfenstein is practically the definition of a AAA shooter, and yet it somehow lacked the casual sexism, racism, or ableism I’ve come to expect from these games. It wasn’t a joke, but it didn’t take itself too seriously either. It included moments of thoughtful diversity, but it didn’t say, “Look, I got you this; do you like me now?” Like Saints Row, it took me a while to learn to trust it. Like Saints Row, it just let me play.

Both games seem to take their warmth from a love of the act of play itself rather than a love of videogames; they feel like toys more than AAA games and all they’ve come to represent. They give me more hope for AAA than any of male Shep’s relationship options, and while AAA may never be my genre of choice, I wouldn’t turn games like these down if they tossed me a controller and asked me to play.