Robert E. Howard is considered the father of the sword and sorcery genre. He created characters like Conan the Barbarian and Kull the Conqueror, but he also wrote detective stories, westerns and other types of tales.

“A lot of people like us sticking to tradition, to a certain extent, but not just rehashing the old stuff,” said Tobin. “A lot of people enjoy seeing the other characters rather than just Conan. Conan’s the big name, but Howard did so many fantastic characters that it’s fun to bring them back to the spotlight.” 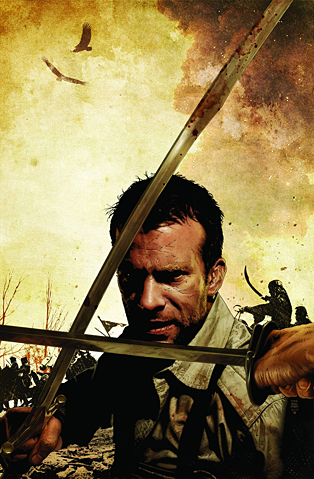 “When anyone thinks of Robert E. Howard, they think of Conan, but [Howard] does so much more,” added Williamson. “Sailor Steve Costigan and Steve Harrison are characters he wrote more of than Conan. So it’s fun to introduce those characters to people and to do a new story with a character they weren’t expecting.”

“We’re working from this incredible source material,” said Barlow. “Robert E. Howard’s writing is like sparks on stone. It’s just so sparse and incredible. We’re trying to do that justice. It’s great stories that are well executed.”

At 80 pages per issue, Savage Sword runs the gamut of Howard’s rich and varied material. In the most recent issue, Savage Sword #3, readers can expect barbaric sword and sorcery, weird crime fiction, the Wild West and more. There isn’t a lot of room to bullshit in a short story – it’s a difficult craft to master, but Tobin, Williamson and Barlow pull the reader in with this issue!

In a comics climate where a lot of comic books focus on soap opera-ish story arcs, the “done in one” and short serialized stories are often overlooked. Paul Tobin and Joshua Williamson have a lot of experience writing all-ages comic books for Marvel Comics and Oni Press respectively.

“In all-ages stuff, I can’t lop anybody’s heads off,” joked Tobin, “but you find the action in different ways. The basic storytelling doesn’t change that much for me; it’s just the tools I use to get to the same areas.”

“I don’t change style at all between the two,” said Williamson. “I like to do the same writing I do with the all-ages stuff. The only thing I change is dialogue and tone a little bit. You just have to check yourself and work.”

The variety of stories in Savage Sword speaks to the source material’s origins. Robert E. Howard never saw his writing published in a book. Weird Tales, one of the most popular pulp magazine anthologies of his day, predominantly published Howard’s work. So it’s interesting to see a comic book anthology series that is devoted to the length and breadth of Robert E. Howard’s stories.

“Conan has proven so popular over the years that it’s nice to see some of the other characters. Howard loved those characters just as much. When you read those stories, you see that love in them. It’s nice for us to bring that love to the characters,” said Tobin.

When asked why people should buy Savage Sword over other comics, Williamson said, “Why not?” And you know what? He’s right. In a field dominated by men and women in tights chitchatting, Savage Sword delivers on the action and adventure that only comics can present.

By Crom, follow @IanGonzales on Twitter or to Hell with you! Robert E. Howard’s Savage Sword, from Dark Horse Comics, is available now.