And, courtesy of Stu’s “One Night in Los Angeles,” you all know by now that I spent one not-so-delightful evening in California Hospital (yes, that’s its real name), instead of at the delightful Downtown Sheraton Hotel.

It wasn’t that horrible. Turns out, when you tell medical folks in L.A. that you want out early the next morning so you can visit E3, they get excited and tell all their other late-night medical buddies. Before you know it, an Asian doctor is visiting you. You figure he’s just replacing the Indian doctor who wants to keep you overnight for “observation.” But really he’s stopping by to find out what your early impressions of E3 are (that’s a true story).

Another true story? In between that one strange evening and now, I found time to ponder my favorite non-Wii U and non-Vita E3 2011 moments. You know, for posterity.

Let’s be honest. Final Fantasy XIII did a few things right, like introducing a fun-as-heck combat system and upping the ante for voice acting and overall visual quality in a JRPG. If only it hadn’t totally neutered the series’ exploration and freedom and left us with an all-too-shallow shell of gameplay, right?

But I was pleasantly surprised by XIII-2. I loved XIII’s fast-paced Paradigm Shift combat, but XIII-2 actually betters that, bundling in occasional quicktime events called “Cinematic Actions”. I was treated to open-ended areas where exploration was the primary focus (about time), as well as the same gorgeous visuals that peppered the first game.

The best part is that Square Enix isn’t afraid to stand on the shoulders of greater games. As in Atlus’ Shin Megami Tensei series, you can now tame monsters and add them to your party. And much like Mass Effect, you’ll have occasional dialogue wheels that actually influence the course of the action.

Can you tell that Square Enix made an impression on me?

Late last year, I saw a see-with-your-eyes-not-your-hands pre-alpha build of Human Revolution, and it was a sight to behold then.

But there’s nothing like finally taking a game for a test drive yourself and the E3 2011 build blew me away. I took the guided tour in a back room, but it was my 20 minutes of hands-on play that truly sold me. This prequel had a beautiful futuristic cyberpunk world (that draws from the Unwinnable color palette, by the way), and I was given plenty of freedom to traverse it as I saw fit.

The best part? The mods. We’ve come light years from the original Deus Ex (which, to be fair, featured quite a collection of mods for the time) to Human Revolution, where you can adjust everything from your ability to inhale poison to the ability to leap tall buildings to the ability to punch through walls.

This may be the best sleeper game of E3 2011. (If it’s not, then Ignition’s El Shaddai: Ascension of the Megatron is, but that’s a tale for another day).

At first glance, Space Marine probably looks like a Gears of War clone [Editor’s Note: It’s actually Warhammer that inspired the hulking power armor of Gears and StarCraft], but look a little closer and you’ll find a vastly different brand of gameplay. Standard shooter mechanics are augmented by some impressive hand-to-hand weapon play. And yes – that means more than simply wrecking your opponents with a chainsaw.

Bland title and all, Space Marine actually makes you feel like a powerful-as-heck space marine. Last game that successfully did that for me? Yup. Gears of War.

Truth be told, I could have lived without the annoying moderator during the Arkham City demo; she really did nothing more than a horrible impression of Penguin’s demented laugh [Editor’s Note: Us too, we felt bad for the guy playing who had to listen to her cackle for three long days…].

But during those periods where she managed to hit her own personal mute button, I loved what I saw of Rocksteady’s second go-round with Batman, mostly because of Catwoman.

I’ll be honest: I’ve never been a huge Batman fan. Arkham Asylum and Christopher Nolan’s The Dark Knight softened that stance, but he’s always bored me. Give me a toolbelt, cape and pointy-eared mask and I could do Batman too. Puh-leeze.

But Catwoman’s gameplay? Now that was intriguing. She walks up behind unsuspecting guards and picks their pockets for keycards and crawls silently along ceilings. But get her in a bad mood, and she can still go all Ninja Gaiden on the bad guys, punching and kicking and flipping with the best of them. She adds a welcome lightheartedness to this Batman game, balancing our solemn superhero flawlessly.

I just hope the folks at Warner Bros. Interactive don’t get any smart ideas about a spinoff. We know how that worked out last time…

[Editor’s Note: Chuck also thought Batman: Arkham City was a highlight of the show. Check out his five favorite moments for the Catwoman trailer.] 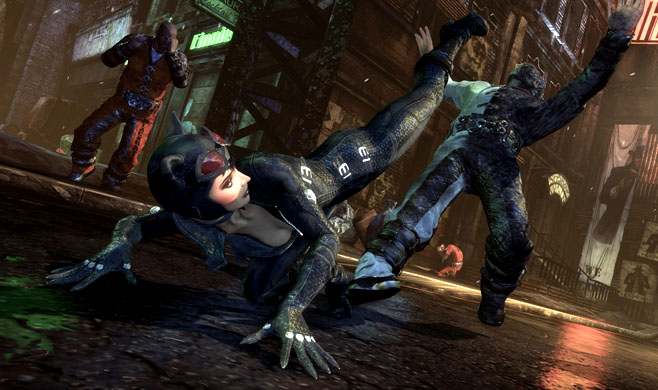 Ninja Gaiden set a high bar on the Xbox and it rose even higher with Ninja Gaiden II on Xbox 360. But this third instalment could top everything.

The few seconds of video shown at Sony’s press conference didn’t truly show the game in all its visceral glory, but if you spent enough time gawking (as I did) in the Tecmo booth, you saw the beauty on display. There are more quicktime events in combat, but they look and feel fluid, somehow adding to swordplay instead of slowing it down. There are stealth elements as well, meaning you’re not constantly meeting enemies head on. The visuals seem to have that coat of polish that a few more years of development on a console can bring, not to mention your typical buckets of blood.

I do have a fear that all these gameplay additions will water down a title that’s built around fast-paced combat, but for now, those fears have been quelled and replaced by a sense that this game will only add to the series’ legacy.

Tecmo, don’t let me down.