I came across a list of the 100 Greatest Comic Books of the 20th Century on the CBR forums and thought that is a list that should be put to the test. To that end, I will read and review every comic on that list and report to you faithful readers as to exactly why this comic book should be recognized as a piece of historical merit.

Having been on a Hulk spree for the last six months or so, from the animated movies Hulk vs. Thor/Wolverine and Planet Hulk to the comics, World War Hulk, Skaar Son of Hulk, Savage She-Hulk, Red Hulk, A-Bomb, and all of a sudden the Hulk corner of the Marvel Universe is out of control, running rampant in the madcap style of Jeph Loeb & Ed McGuiness.

So when I wanted to start a review of the 100 Greatest Comics I decided to start here with the STRONGEST ONE THERE IS. Let’s take it back to the beginning. 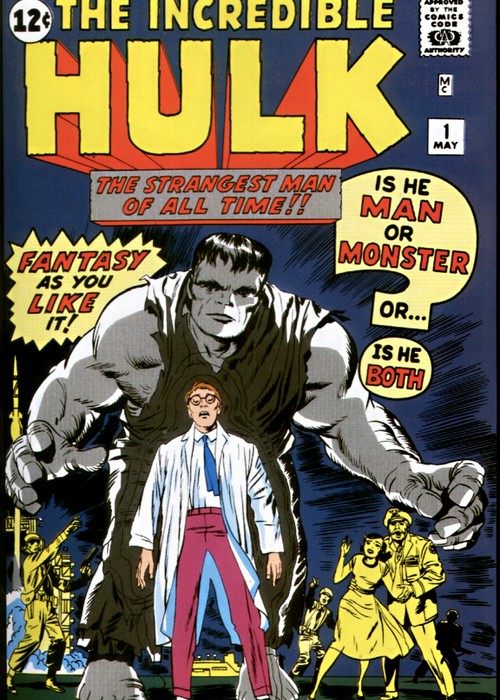 THE INCREDIBLE HULK: THE STRANGEST MAN OF ALL TIME!!
Is he MAN or MONSTER or…is he BOTH?
Fantasy as you like it!

HAH! This is amazing. Tell me that’s not amazing. Pure 1950’s science fiction monster movie mash-up. The Hulk looks like Frankenstein meets Mr. Hyde by way of Golem, a faded grey shadowy beast with an expressionless face. The composition here is just amazingly simple and utterly iconic. These comic books from the Golden and Silver Age just captured some quantum leap of the medium. And here is the beginning of a character that would spawn two cartoons, two movies and a quintessential 70’s television show.

I never really got the Hulk. Something about Ang Lee’s movie made the character more accessible for me though. The release of something so indescribably repressed, pure angry expulsion. Imagine enacting whatever childish and destructive impulse you could possibly have and be endowed with the strength (strongest one there is) to create devastation on a global scale. But there I go mixing the comic level and the film/television level.

Back in the first baby steps of Hulk’s legend, we have a pretty typical b grade sci-fi movie, the scientist that becomes victim to his own invention. In this Jekyll & Hyde case, we have gamma (atomic) energy substituting for the alchemical potion that makes it so this other than human being of arrogant rage is able to run rampant and express every internal impulse.

The artwork here is just amazing. You can totally see the beginning of work that Tim Sale would build upon years later. But the empty shadows of that last panel are what really takes this beyond a mere trashy illustrated periodical of a long gone era. Look at the void that is his face. The expression of a near smirk hinted at, the shards of the lenses. It’s a true darkness of artwork right there.

That’s what’s truly amazing about this comic. The work of Jack Kirby is always just breathtaking in composition and design. But some of these single panels are just so well done you just have to pause for a moment and take it in. 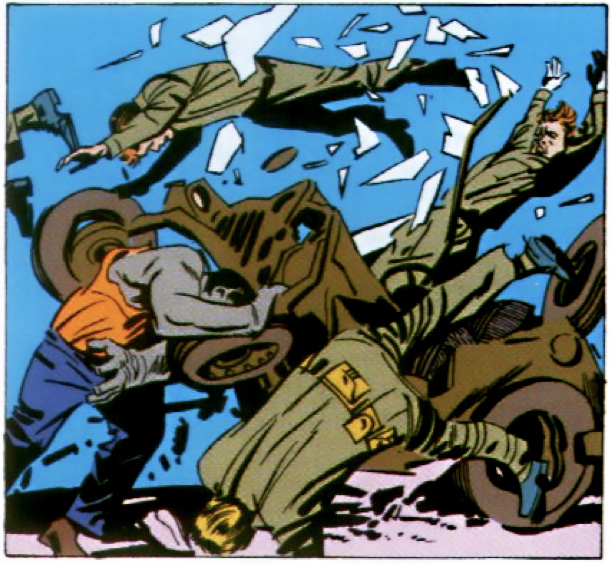 That’s just a one off panel as if it were a nine panel grid page. The posture of the Hulk and the position of the bodies, the curled up wreckage of the jeep, it’s just incredible to see this come to life and it’s really just a small segment of the entire page.

There was a detail to the artwork back then but also the careless bravado of doing it fast and doing it well. Not letting doubts creep in and just pound out books with the pure impulse of creativity. With very few artistic legends in the comic industry at the time, they had an open playing field in which to just give us their rawest and true work.

I mean just look at that. The broads got a bum deal back in the day. Always fainting or being captured it seems. There’s infamous Rick Jones, teenage troublemaker who’s responsible for the origin of the Hulk. And the supervillian of our premier issue, The Gargoyle! A hideously mutated super smart freakmaster of Communist Russia alignment.

He’s pretty sensitive. So he cries. I’ve certainly cried out “I’D GIVE ANYTHING TO BE NORMAL!” more than once in my life. I understand Gargoyle. And Dr. Bruce Banner helps him regain his humanity through radiation and then Gargoyle…well, you gotta read the issue…

But suffice to say that the Commies paid for it, all right! And the scientist/monster and kid sidekick escape via escape rocket. Pretty damn cool. There’s so much story in just this one issue. You get an origin, THE COMING OF THE HULK, then THE HULK STRIKES, but suddenly ENTER…THE GARGOYLE!, and finally THE HULK TRIUMPHANT! Seriously, this is a nice read for one comic, and the best part is it’s only 12 cents.

Wait, I’m being told that some comics are actually worth money and it seems that a Near Mint/Mint copy of the first issue of the Hulk is currently going for about $200,000 as of April, 2011.

If you’d like to read this comic I’d suggest purchasing this collection from Marvel Comics.

Kurt Christenson is also filled with rage and suffers from a Jekyll & Hyde persona shift, though it’s from comic book writer to angry prose writer, see the trail of destruction over at @KurtChristenson.

Coffee Break: Duel of the Fats