Hi, welcome to the Vintage RPG FAQ. You are probably here because you follow Vintage RPG on Instagram, or on Tumblr, or listen to the Vintage RPG Podcast and you have questions. Well, I’m Stu – I run the joint and I have (some) answers. I get these questions a lot, so hopefully this satisfies your burning curiosity. If not, drop me a line at vintagerpg@unwinnable.com! 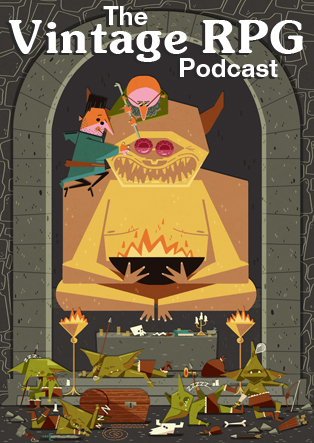 Me and my co-host and producer, Hambone, chat for 30 minutes about roleplaying games featured on the Instagram feed. We get into the history, the art and the impact. We also talk about other stuff we’re playing. You can check it out here.

Will you ever make the podcast longer/release it weekly?

I know you think you want longer episodes, but I think keeping to the philosophy of “leave ’em wanting more” will work in everyone’s interests.

We’d love to release episodes more frequently, but our real life schedules really won’t permit it right now. Weekly episodes is a goal of our Patreon, though, so keep an eye on that.

Who is this Hambone guy?

A bard by trade, but a ranger by night. John McGuire slings modules over a DM’s screen like nobody’s business. A relative noob (with only 15 years RPG experience), Hambone, as he’s known by his friends (long story; for CliffsNotes, read The Dirt, by Motley Crue), is excited to learn about all the great esoteric RPGs from the golden age. He’s the producer and co-host of the Vintage RPG Podcast.

So, about that Patreon?

You can check out our Patreon here. It is a great way for us to give folks a peak behind the curtain, interact directly and start offsetting our costs. Mostly, its an excuse to spend more time doing cool RPG-related stuff.

Right now, rewards-wise, you can join our patrons-only Slack, ask questions that will be answered on the podcast, get behind the scenes access to exclusive essays and videos and even call the shots for an episode of the podcast.

Are you in the roleplaying game business or something?

Nah. I do have a professional curiosity in tabletop game design, though. My day job is running Unwinnable, which consists of a site and two digital magazines dedicated to pop culture criticism (focusing on games). You’re on Unwinnable now, so go click around! If you dig our work, consider subscribing to the magazines.

Does everything you post come from your personal collection?

Yup, gods help me. The collection currently resides on the dozen shelves seen in the first post on the Instagram and ten storage boxes. This might sound like a lot or a little, depending on your own collection. My brain says this is probably too much, but my heart is actually a bit surprised at how little space it takes up, all things considered.

This is a tricky question because we are at a point in time where the definition of what an RPG is has become wonderfully broad – there are all kinds of different games for different people now. The important thing to remember is that anyone can play an RPG and it is much easier to run or play than you might think.

If you want to try Dungeons & Dragons – which is probably the easiest thing to do since the game is played pretty much everywhere – find a beginners group playing Fifth Edition. It is modern and streamlined and you’ll have a good time.

Mouse Guard is a great introductory roleplaying game – the core concepts are similar to D&D but the rules system is way simpler.

I am a big fan of literally every indie storytelling game I’ve read – these have light rules, can usually be played in a single session and cover a wide variety of themes. Fiasco is a good starting point.

Tales from the Loop is a mystery game where social interaction is favored over physical violence. It has rules that are easy to pick up. I am running it for my group now and we are having a blast.

Finally, if you’re a horror fan, just dive right into Call of Cthulhu (the seventh edition rules are the best).

How about RPG history? Where is a good place to start?

I don’t have a good answer for this. Most of what I know, I’ve absorbed over years of reading, talking to folks and occasionally looking stuff up on the internet. RPGnet is a great resource. I also devoured Shannon Appelclines’ four-volume Designers & Dragons when my very supportive wife got them for me for Christmas.

Have you played all the games you’ve posted?

I wish. I’ve read nearly everything, though.

Where do you get all this stuff?

I accumulated a good deal of it over the course of playing RPGs from about the time I was in fourth grade (1985-ish?) to the present. I only started collecting in the last couple years. For that, I mostly dig around on the usual spots online (eBay, Abe Books, some Facebook auction groups) until I find a good price for whatever I am looking for. Sometimes people give me stuff when they are cleaning out their house. Those people are very nice. Hit me up if you just gotta get that box of D&D books out of the attic.

Why collect this stuff?

The basic answer is because I enjoy reading RPG rules and sourcebooks. A more precise answer is that a few years back, I began to miss a (sizable) number of RPG books that were no longer in my possession thanks to a flooded basement, selling them off and, occasionally, borrowers not returning them.

Any advice for new collectors?

Patience, first and foremost. The collector’s market for this stuff is ridiculously overpriced right now, so the best bit of advice I can give you is: If you don’t see it for a reasonable price, wait. With the exception of some genuinely rare items from the early days and some short run modern publications, these books had larger print runs. You shouldn’t pay anything much more than double the cover price and even then, most things can be found on the cheap if you are patient.

Are you on the hunt for anything at the moment?

Glad you asked! You can check out all the non-TSR books I am looking for here. As for TSR, I have about a third of their output, so a want list would be unwieldy, but if you’re looking to unload stuff, let me know. Same goes for Fighting Fantasy and other pick-your-path game books.

What games have you run?

A lot of Dungeons & Dragons, so much so that I doubt I will ever seriously run it again (even as I type, that, though, it sounds like a lie). I’ve also run Call of Cthulhu, Pendragon, Stormbringer, HeroQuest, Tales from the Floating Vagabond, West End’s Star Wars, Middle-Earth Roleplaying and probably a bunch of stuff I am forgetting right now.

What games have you played?

A lot of Dungeons & Dragons. Every edition, in fact, including the Red Box. I’ve also played Star Wars, Paranoia, GURPs, After the Bomb, Marvel Super Heroes, Nightlife, Vampire: The Masquerade, Rememorex, TORG and probably a bunch of stuff I am forgetting right now. A lot of board games, too, if you were wondering.

What is your favorite tabletop roleplaying game?

It is impossible to pick favorites. Dungeons & Dragons is the blue jeans of RPGs – I might have problems with it, and it doesn’t suit every occasion, but it is a classic without rival. I think every game has it charms. Call of Cthulhu is probably the one I enjoy the most, RuneQuest has the world I find most fascinating and countless indie games have mechanics that delight me, but Pendragon is the closest to something I would call my favorite. It is a beautifully realized game, from concept to theme to mechanics. A real underappreciated masterpiece.

What is your favorite Dungeons & Dragons campaign setting?

Planescape, by a large margin. There is a lot to love in most of them, though.

What is your favorite Dungeons & Dragons edition?

Second, also by a large margin. And I say that fully recognizing how crappy it got in the end.

Who is your favorite RPG artist?

Again, impossible to pick favorites. It is easier to go by era. Dave Trampier or Russ Nicholson for the old school. Keith Parkinson for the 80s. Tony DiTerlizzi and Stephen Fabian for the 90s. There are too many excellent artists working today in too many different styles to pick a favorite.

You sometimes talk about social issues as related to RPGs. Aren’t games just supposed to be fun?

I don’t see fun and dealing with important issues as being mutually exclusive. I am a Lovecraft fan, so I have lots of practice in enjoying things while wrestling questionable stuff they contain. I think it is important to be able to identify and examine things like sexism, racism and homophobia in creative works. Sometimes, you can set those negative things aside and still enjoy them – but only if you take a good hard look at them and are open to discussing them. Other times, the gross outweighs the good – you won’t ever see those books in my feed.

What is your deal with manticores?

Sigh. Look, the manticore is a legendary creature of antiquity. I don’t think because something is old means that it is perfect – remix, reimagine, do whatever – but manticores were cool (and creepy) as they were, with their three rows of teeth and siren-like voice. Giving them wings actually works against the idea of the manticore as a sneaky, opportunistic man-hunter. I don’t know who gave manticores wings (it predates roleplaying games – there are winged manticores in Roger Zelazny’s 1972 novel The Guns of Avalon) but I would like to find out so I can send them a strongly worded letter.