I came across a list of the 100 Greatest Comic Books of the 20th Century on the CBR forums and thought that is a list that should be put to the test. To that end I will read and review every comic on that list and report to you faithful readers as to exactly why this comic book should be recognized as a piece of comic book history. 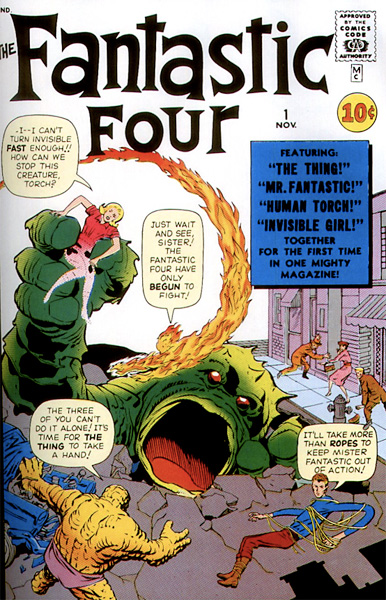 I remember hearing a story where the head of Timely Comics (pre-Marvel) and National Periodical Publications (DC Comics) were playing golf, and the DC chief says “yeah, we got this book out, it’s a team of superheroes, called the Justice League, selling like hotcakes!” The head of Timely, which was mostly into publishing monster comics at the time, turned to young Stan Lee and said “make me a book, kid, and have it be a team of heroes, but you know, keep the whole monster thing in there to keep these books selling to our regular customers.” Maybe that’s not how it was, but I like the Mad Men aspect of business suits out talking about the big bucks in publishing illustrated periodicals, always on the lookout for the next big thing.

The Fantastic Four was that next big thing, the landmark comic that is essentially the birth of the Marvel Universe, the beginning of the creative dream team of Stan Lee and Jack Kirby working in what would become the ‘Marvel Method’. So with Stan eager to make a name for himself and to write comics that he wanted to read, and with Jack Kirby eager for more work outside of DC (then National Comics), Atlas Comics published Fantastic Four #1. What an odd group of superpowered individuals, all fighting a giant monster on the cover. It really has that pulp adventure tone, a team of explorers, altered by cosmic radiation and therefore the perfect people to tackle all manner of bizarre otherworldly menaces. Here on the cover though we have Invisible Girl all up in peril, the Human Torch all bravado and no action, the Thing, his back to us but ready to get into the fray, and Mr. Fantastic is tangled…in ropes. But this all of them in one mighty magazine and it has a nice design-sense to it. That logo though is pure awesomeness. It’s late 50’s pop-quirkiness at its finest. 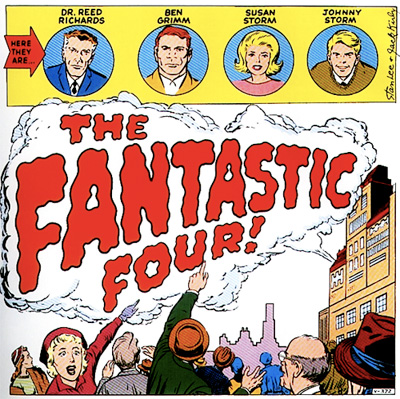 This comic just jumps off into a weird place with some sort of giant smoke signal (I guess what would people imagine future communication would be like, I mean smartphones?) sent out by Dr. Reed Richards from his apartment window. Some sort giant flare, rather than give his girlfriend, her brother, and his best friend a ring on the phone, well I guess shooting something into the air makes some sort of sense somehow.

Sue Storm is having socialite tea time, and so turns invisible at sight of the flare to run rampant through the streets knocking everybody down in the process. There’s the typical gag of an empty cab ride and it being a ghost handing over the money. We get it, she’s invisible, and ghosts are invisible. But if she can control it, well it just seems really silly, but for the sake of the cheap gag let’s run with it. 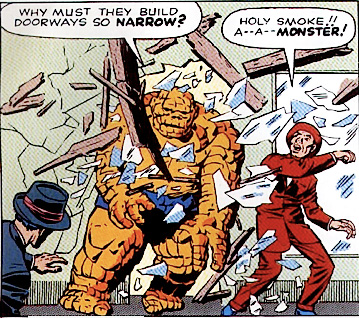 Ben Grimm is out shopping for more oversized clothing, when he heeds the call, and so, smashes out the doorway (that he just entered through), and gets into it with the cops before tearing open a manhole and dropping into the sewer, then goes a fair distance before punching up through the street, smashing a car and causing god knows how much unnecessary damage in the process. I thought these guys were supposed to be heroes, what gives? 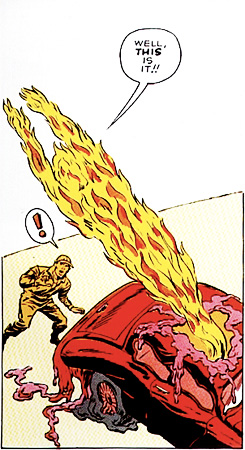 Johnny Storm is at the garage working on his hot rod with the mechanic. And just as they get the car in good working order, what does this punk kid do but turn into a human torch and melt the whole damn car and fly off into the sky befuddling all the folks below. On the flight over he gets caught up with some military jets and winds up melting one but not before it fires a missile at him, a HEAT seeking missile, naturally.

Which Reed Richards, Dr. Reed Richards, catches and tosses into the river with his elongated arms. He then snags Johnny and hurls him into his apartment window where they can all have their meeting now, and find out what the hubbub was all about, why pedestrians had to be knocked down, cars slagged, streets smashed, and rivers polluted with armament. So Reed, tell us, what is the emergency?!

But before we can get into all that, who are these people, and just how did they come about having these fantastic powers! Once again the Commies are to blame. We just have to reach space before they do, because god knows that’s the solution to the Cold War. So a professor, his girlfriend, her kid brother, and a pilot all sneak onto a space station base and pre-maturely launch their own rocket into space, not knowing if these darn cosmic rays will be as harmful as they might seem. Funny that Ben Grimm is the one most concerned here and in the end he’s the true tragic figure of this comic. But really, sneaking onto a base and piloting a rocket into cosmic rays? I just never got the whole deal here. 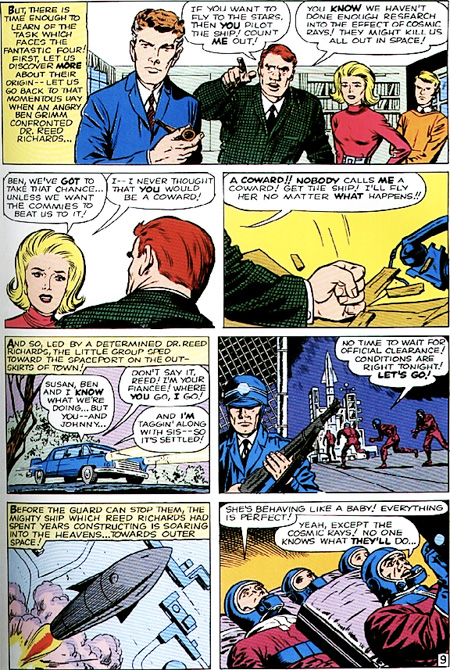 As it turns out, cosmic rays? Yeah, kinda bad but also kind of awesome. The crew get bombarded and then crash land back on Earth. One by one we discover along with them their new powers. So right there they decide they now have more power than any other human before, so they must make up codenames and fight the good fight. And what would the good fight be, might you ask? 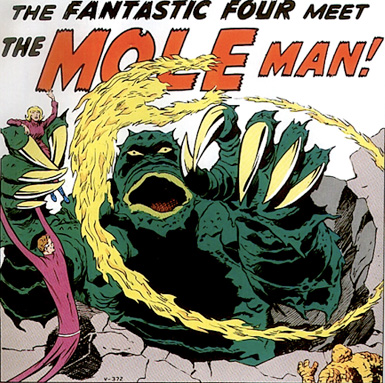 Now that’s just cool. The logo dropped back, the arc of the Human Torch blazing around the monster’s outstretched claw, the isolated figure of the Thing in the bottom right, while once again the damsel is in distress, and stretch-o stretches. But the Mole Man? Who could that poor sap be? Turns out someone is attacking atomic power plants around the world, to which we cut to a scene where I think we see a prime example of the monster comics of the day. A drama-laden diatribe about the power of this massive beast, and we deepen the mystery of just WHO IS THE MOLE MAN?

We shift back to our foursome as they find out where the source of the problem is, Monster Isle! Of course! So they zip on over in a fancy jet and then beat up a hydra. The team is then split up so Reed and Johnny fall down into the Mole Man’s lair where we see the Valley of Diamonds! 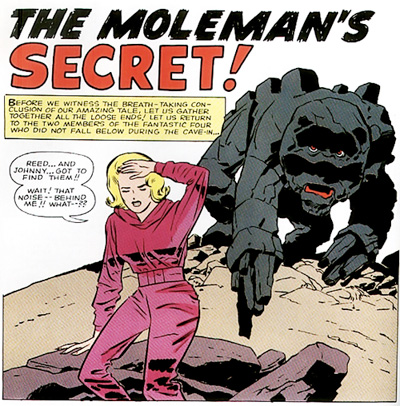 But the Mole Man has a secret, or so it says here. The Invisible Girl and the Thing are still topside, and the Thing takes a moment to kick the crap out of that monster looming over Sue over there. 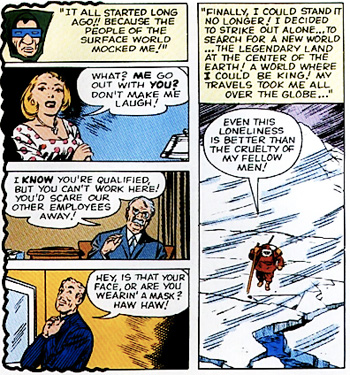 Then jump right back to the Mole Man, and the tragic tale that led him to become king of the monsters. I mean, the guy was so ugly that he couldn’t get a date, he couldn’t get a job, and fancy gents endlessly mocked him. So he did what any of us would do, and went in search of the land at the center of the Earth. Loneliness is often better than the cruelty of our fellow man sometimes, wouldn’t you say? His face was even further destroyed by a fall down into a cavern, and his eyesight just, you know, the lighting down there, it’s just not good to try and read in the dark like that.

Of course, he’s gotta overcompensate and challenge Reed to a duel, a BO-STAFF DUEL! Which he quickly kicks butt and takes names, listing down his awesome new attributes gained from keeping it underground. Of course the Thing shows up and kills the party, and the whole thing is wrapped up rather unceremoniously with the team just picking up Mole Man and seeming to run away with him. Those are some cool monster designs, and if anything, that right there is what would keep me coming back. I love the monster designs here. 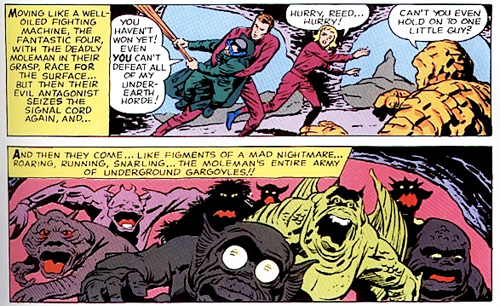 The team just tosses the little guy aside and hauls ass off the island, which promptly blows up, for no real good reason. And seeing as they left Mole Man there to die, well, I guess that just about wraps up this first adventure. Now, what did we learn? 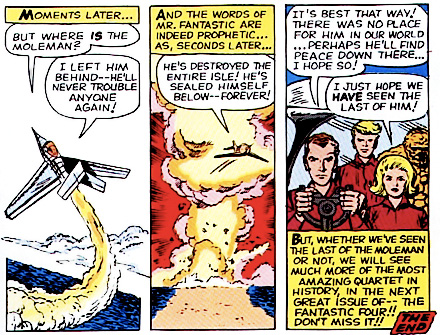 A scientist who is too concerned with beating the Russians into space convinces his girlfriend to help convince her kid brother and this pilot to do something they know to be reckless, which turns them into freaks of nature which they then decide it’s cool to be a jerk and just make a mess of things and then to save the day they’ll go fly around the world to f*#k up a little reject’s kingdom of diamonds and monsters, making him seal himself in, retreat within himself, further rejected by the world and this brash team of arrogant adventurers.

I’ve enjoyed many a Fantastic Four yarn in my day, but there was always something about them that never sat well with me. They become the top super heroes of the Marvel Universe, the first family of comics, famous and admired (while mutants are feared and loathed) but all they do is make a mess of NYC and cause trouble, because right here from the beginning they were a bunch of rogue squares (maybe not Johnny, he’s a dunce) that like to mess up super scientists that take revenge against the world due to their shortcomings.

It’s the birth of Marvel Comics, and yes, the true beginning of the dream team of Lee & Kirby, but really, I don’t get the appeal of the Fantastic Four. But it struck a chord with people and now we have two pretty awesome movies (yes, I will defend that), a few different cartoon series, and a new franchise reboot coming soon. How a team which is led by a guy who’s super power is stretching, and how that character actually evolves and becomes really cool (in recent years) is a testament to the love the creators have for this, the World’s Greatest Comic Magazine.

If you’d like to read this comic I’d suggest purchasing the Fantastic Four Omnibus, Vol. 1 from Marvel Comics.

Kurt Christenson is working on the next World’s Greatest Comic Magazine with an amazing Marvel artist that’ll rival the Lee/Kirby team-up, follow the rise over at @KurtChristenson

This Public Safety Announcement Brought to You by Unwinnable