As a child of a science fiction family, pregnancy itself has always been a horror trope. The Goa’uld parasite in Stargate comes to mind, something that lives inside of you until it no longer requires you and then bloodily is pulled out of you. The first time a peer was pregnant, she told me that her child had rolled over in her stomach and I made the mistake of asking how she knew, and discovered that her baby’s body had contorted the skin of her pregnant belly to the point where you could see his shoulder pressing visibly through her flesh. It’s a strange sort of benevolent parasitism, pregnancy, which invites adoration and horror. Birth is one of the few acts of love that can kill you, a messy, bloody affair that demands everything of the birthing partner.

Some birthing parents in the US are required to go back to work while they can still feel their pelvis moving, presumably unmoored in their own bodies. Pregnancy is a necessary part of being alive – being human is still intrinsically tied to those months spent inside of another person – and growing up means seeing more and more of the people you know go through the process themselves, carry children inside of their body, watch as they are inherently changed and hormonally unbalanced and split, physically apart, sometimes surgically in order to create life.

Necessary, yes. Beautiful even, the way that bodies can create life. But media is nothing without its tropes, and in horror and fanfiction we can often see that in the monstrous pregnancy.

This is a trope oftentimes seen in both traditional media and also derivative fiction. I’ve discussed this before, male pregnancy in fanfiction specifically, but this is a deeper dive on the topic. Monstrous pregnancy is an interesting concept – for starters, base level pregnancy is often seen as something inherently beautiful – media often shows pregnancy as this idyllic experience, the visual representation often something softly lit, pastel bright. Even in works that eventually have horrific elements – mother! or Annabelle – they show soft white, blonde women who are perfectly svelte save for round cheeks and perfectly round bellies. Motherhood – and pregnancy in these cases is explicitly motherhood – is tied to a pastoral image of feminine representation, nestled softly in protective layers. 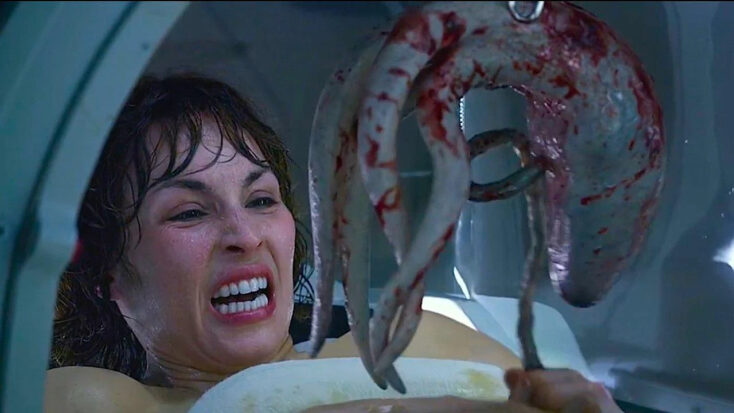 One of the first ways that media ties monstrosity to pregnancy is through gender – the Alien franchise is a masterclass in monstrous pregnancy. The alien symbiote is an unwanted pregnancy, a forceful impregnation through violent means. The facehugger shoves its strange appendage deep inside of whatever orifice is necessary, impregnating the host with a creature that will then force its way out of the body, typically from the chest. But the chestburster in Alien? Even with a female protagonist, the chest that bursts is a man’s. Through the course of the series, women will carry the alien symbiote as well – but even in Prometheus where Elizabeth Shaw carries the symbiote in her body, it’s still a monstrous pregnancy. In her case, previously thought to be infertile, she carries the alien in her body after being impregnated by her partner’s intentionally infected sperm – she’s simply a vessel for someone else’s science experiment. To remove the unwanted creature, a creature that is growing too fast for her body and which will kill her – which insidious outside forces want her to keep – she must perform emergency surgery. The film makes sure that we know that it’s a surgery – the machine tells her it cannot do a Cesarean because it is only calibrated for men, so Dr. Shaw must tell it instead to remove a foreign body from her abdomen. Even in that case, her pregnancy is monstrous.

In fanfiction, the monstrosity of pregnancy is typically tied to male pregnancy (or mpreg) and how it relates to the strange alien biology of a biological male carrying a child. The addition of a secondary layer of gender in fanfiction pregnancy is important because it allows for secondary gender characteristics – where is the baby? How is it carried? These are biological quandaries that lesser writers would gloss over – but in certain parts of fandom are perhaps overly explained. Fandom has done everything from so-called “ass babies” (don’t think about it), cis-female anatomy, to more complicated choices. One work I remember reading had Stiles Stilinski pregnant, and as time went on, he basically grew a seam along his belly – a place where he would split when he finally gave birth. Like an alien had ripped its way out of him.

Pregnancy in horror is an exercise in lack of bodily autonomy, specifically when applied to gender. In the Twilight series, itself an allegory for Mormon ideology specifically related to abortion and gender roles, you see the way in which Bella Swan is effectively forced to carry her child to term because she is pregnant. Her pregnancy is intentionally monstrous – so much so that in the film adaptation they had to physically build a copy of the actress because it would be a moral quandary to starve her to the point where she would need to be that frail. It is canon in that series that to birth her child, Bella Swan’s hips are broken, her back as well and that she has to have her pregnant belly torn apart so that the baby can arrive. The process of giving birth literally kills her. The baby, above all else, is what Bella Swan deems important and as such, she suffers for it.

Due to its highly gendered aspects, pregnancy can also be dysphoric. Horror is often best viewed through a queer lens and monstrous pregnancy is a perfect way to encapsulate that –the dysphoria of your body being used in a way that you did not intend.  Media is tied to traditional gender roles, and pregnancy itself is seen as an incredibly gendered act – even though not all women can or do become pregnant. In cases like Dr. Shaw or Bella Swan, where a child is unexpected or impossible but not inherently unwanted, the horror is even greater. A body twisted by an interior force, a parasite that only wants you dead when you only desired to love it. It takes an act that could be beautiful (pregnancy, birth, life) and twists it; and that is the heart of the monstrous pregnancy.