Space exploration games have you encounter unknown dangers upon landing and venture into alien landscapes with caution. The roleplaying shooter game Outriders, by Polish developer People Can Fly, takes things further by showing uncharted territories from a European colonialist perspective through architecture that shallowly reflects history.

Outriders initially took players through human-made trenches, pitted them against dangerous creatures of the wilderness, then finally sent them into the dunes of planet Enoch with a small village of the Pax people called Utargak. It created an inclination to explore through its several narrow roads, and the entire place was empty save for enemies called Ferals. Making my way around, I came across towering pillars that reminded me of the artistry of mosques like the Great Mosque of Djenné and the Agadez minaret. Those mosques are Sahelian architecture, which uses locally sourced materials such as adobe, plaster, and recognizably the wooden beams that protrude the sides of the walls. The adobe and wood combination exists in other parts of the world. Still, the village’s blue-tinted walls and triangular patterns were reminiscent of Nubian influence – evidently connecting this story of colonialism to the African continent. As a Muslim gamer, the similarity and recognizability of Sahelian mosque architecture intrigued me, but it quickly unraveled sour feelings towards Outriders. 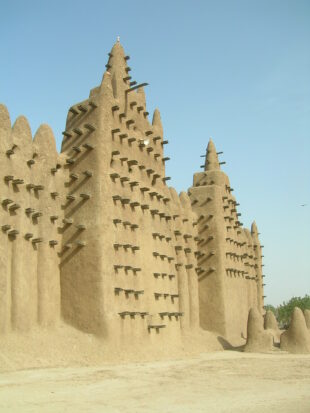 Later, reading up on the creation of Outriders and People Can Fly’s claim to showcase the controversial 1899 novella Heart of Darkness led to a bitter realization about Utargak’s purpose, which worsened when the story revealed that we, the colonialists, were killing the Pax-turned-Ferals in their hometowns. Heart of Darkness, by a white Polish author, inspired the plot of Outriders. Some have read this novella as a critique of European colonialism in Central Africa, but it has garnered condemnation for its racist tone, perspective, and derogatory depictions of lands and people – significantly drawing criticism from Nigerian novelist Chinua Achebe in his novel An Image of Africa. He describes Heart of Darkness’s portrayal saying, “Africa as a metaphysical battlefield devoid of all recognizable humanity, into which the wandering European enters at his peril,” which parallels our protagonist’s journey through Enoch’s dunes. It felt like the developer intended to create architectural implications relating the story of the Pax to Heart of Darkness, and this environmental attempt at relating to historical context through Utargak’s level design translated superficially with players at the forefront of further exemplifying a colonialist perspective.

Architecture in games adds an additional layer of storytelling by enveloping players in the situation of the mission and drawing emotions from the player. This level felt discomforting because the Ferals – a disparaging name, by the way – were once the Pax who lived in Utargak, but unlike our character who was able to retain their humanity, the Ferals had forgotten their Pax identity. It’s bizarre to fight the Ferals as the good humans who received superpowers to become Altered from the mystical and deadly Anomaly power when, according to the lore, the pacifistic Pax who had a harmonious relationship with the Anomaly turned into aggressive, uncompassionate enemies. It’s an unfair juxtaposition between the player and the otherness of Ferals, which is suggestive of the Western perspective of painting colonized people who stand up against imperialism as the enemy. Although the real enemy is said to be the exploitative humans aboard the Caravel shuttle who subjugated the Pax, we fight against the Ferals till the very end in Pax City and the remains of the Caravel.

Usually, minute artistic details in videogames that excitedly remind me of mosques exist for aesthetics or to represent something otherworldly – which it accomplished in Utargak and Pax City – but I never thought I would stumble across something this multifaceted. After rolling credits, this story only seemed like a purveyor of colonialist beliefs amplified by its level design of Pax homes.

Game, Made of Lines and Vines