I feel like the critical and fan responses to Stray are emblematic of something I started to describe in the previous edition of this column, whereby there has become in the past decade or so a universal, silently agreed upon vision shared by videogame makers, players and correspondents, that videogames today are “better” than videogames from before, which were “worse” – and that the rehabilitation of videogames as a culture shall and must take place via games becoming less based on aggression, violence, confrontation or anything materially connected to the reality of life, i..e, videogames rehabilitate their culture via the progressively more sophisticated and encompassing delivery of escapism.

What philosophers call “spiritualized hedonism”, when the core of 21st century societies and individuals, especially in the west, becomes the gratification of one’s own happiness, and also the celebration of the necessity of that objective, has either crossed over into, or been directly influenced by, popular media, including and especially videogames – if game makers and gaming advocates in all forms want to proselytize the crucial and increasing role games play in modern economies as way of justifying, by attendance, their likewise cultural importance – and they do – those same game makers and gaming advocates must concede (and I imagine they would see it as concession) that games also contribute to our shared malaise, that if a lot of people are paying for and playing games, and a lot of people are unhappy, at some level there may be a connection. This is, without a doubt, the first time in history where it is essentially possible to gratify every demand your body and your soul place upon you while also living and existing alone. What I think games encourage is the decision to be alone and the feeling that your aloneness is some kind of meaningful lifestyle, preferable to more “normal” other lifestyles. As videogames offer successively more total and higher caliber escapism, and find that the provision of that escapism rehabilitates their cultural image, and in turn generates for them profit (the most successful and widely loved games today, Minecraft, Fortnite, Grand Theft Auto Online, Call of Duty: Warzone, each offer sufficient “content” that their escapism never truly ends, and respectively produce millions if not billions in revenue) it becomes arguable that as well as promoting escapism, it is in the interest of videogames to heighten the sense that there is something you should want to escape from. 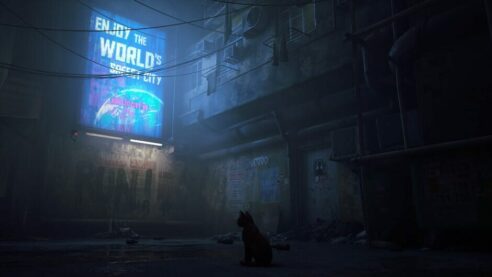 If our mass, entertainment media, in this case specifically videogames, communicates stories that are humanistic, real and argue the value of life experience and people, not to crudify, but we may possibly all stop playing videogames, for escaping from life would perhaps feel less necessary, and so games would have less a purpose to serve as pain relief. Stray becomes a recent and significant example of a game which by its remove from reality and the experience of our lives as people (fictional city, fictional time, quasi-humanoid robots rather than human beings, the player character is cat) implies a corresponding aversion to reality, and peopled experienced. It is described as “wholesome” and it is described as “touching”, and in those descriptions, by critics and advertisers, becomes broadly affirmed in videogame culture for achieving something that games, by their general reputation, achieve rarely – and thus sets a template or watermark for what “wholesome” and “touching” resemble in games, and also, by extension, what artistic achievement in games may look like. The absence of, and implied disinclination towards people, life and attempting to contend with reality in a sustained or substantive way, becomes not only ignorable, not only permissible, not only celebrated, but superlative – a game which, at best, abstracts human emotion to the point that its presence, and any comment offered on it, are negligible, becomes simultaneously the example of what videogames might supremely or uniquely be capable of accomplishing.

Videogames, in short, promote a lack of substance, and of the issues affecting people – a kind of anti-real-worldism; an ahumanity – as almost optimally culturally valuable, the thing that they do that makes them necessary. Though not a conspiracy or any kind of deliberate, long-term marketing strategy per se, this is increasingly hard to see as either coincidence or benign. If the videogame economy depends on people placing a high value on escapism, it’s inarguable that it is also in the interest of that same videogame economy to promote the idea that escapism is necessary, and thus worth money – that the hostility, obligation and social demand of the real-world is unpreferable to, say, being alone with a videogame. Stray exemplifies this dynamic via the reputation and praise it has gained precisely for providing players an experience and world markedly separate from their actual experiences and world. It is another in an increasingly populated ancestry of games which serve as propaganda for the idea that not being a person, not communicating with people and existing somewhere detached from the world is not just good in the sense of being entertaining, but somehow spiritually good, and therefore, undoubtedly, worth buying.

Edward Smith is a writer from the UK who co-edits Bullet Points Monthly.

Videogames are NOT art… and why should they be?
Previous Post

The Horror of Finding a Home