I normally go about writing articles by looking at games and then comparing what I see in them to something in the real world, but this time I decided to try something just a little bit different. I’m going to start by looking at something in the real world that, to the best of my knowledge, has never appeared in a game. I find this to be a real shame, but that’s another story. What then am I going to talk about? I’d like to discuss the fascinating society that flourished in India between about 3300 and 1300 BCE known as the Indus Valley Civilization. You might also hear it being called the Harappan Civilization due to its type site, Harappa.

Archaeologists refer to societies which developed a high level of complexity without any sort of outside influence as pristine civilizations. While the definition of a civilization is actually debatable, I’m just going to use the conventional understanding of the concept. In any case, these emerged at various points in time and place, but the earliest of them were in Egypt, Iraq, India and China. These all sprang up around 3000 BCE. While you’ve almost certainly heard about what happened in Egypt, Iraq and possibly China, you probably aren’t familiar with any of the developments that took place in India. You shouldn’t feel bad about this because it represents a problem with our educational system rather than a personal failing on your part. I first heard about all of this in college. Whatever the reason may be, the fact of the matter is that you should know a little bit about the Indus Valley Civilization because it represents a very different form of society with respect to what came out of those other regions. While they were all about hierarchy, the people of the Indus Valley Civilization were more focused on egalitarianism. 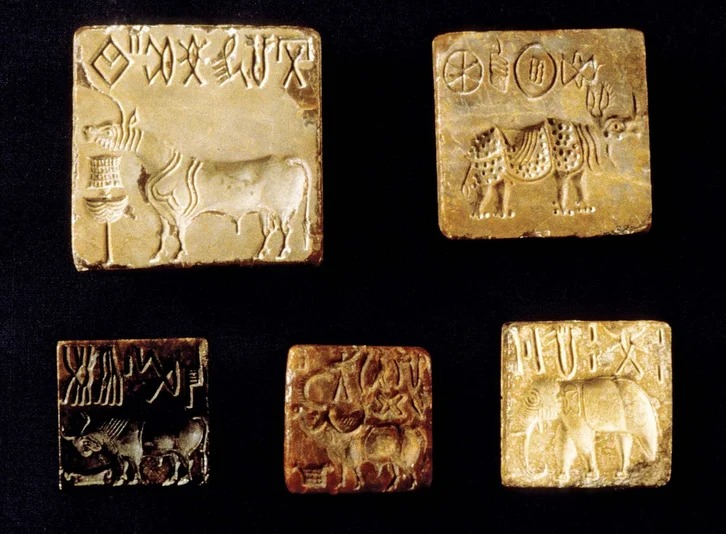 The society consisted of several dozen cities of which the largest was Harappa. In terms of population size, these ranged from about 10,000 to 60,000 inhabitants and there were at least four cities at the higher end of the scale. There could have been up to five million individuals living along the Indus River at its peak, so the Indus Valley Civilization may not only have been the most populous, but also the most urbanized society in the world at the time. These people mastered metallurgy, producing bronze from copper, tin and lead. They developed a system of standardized weights and measures which allowed them to accurately measure distance and time. The people of the Indus Valley Civilization also made intricately designed craft goods including statuettes, jewelry and decorative pottery. They had musical instruments like drums, harps and flutes. The most important innovation was probably the stamp seal which is basically a small device used to create impressions on wet clay. While they’re definitely notable for their artistic value, these contain what seems to be a form of writing, so the stamp seals hint at all sorts of economic developments from record keeping to long distance exchange networks. Trade was in fact a significant aspect of life in the Indus Valley Civilization. They don’t seem to have invented the wheel, but these may have been the first people to use wagons in a meaningful way. They also maintained maritime connections with Egypt and Iraq.

When archaeologists first found the Indus Valley Civilization, they assumed that it was every bit as hierarchical as what they had already discovered or would soon be discovering in Egypt, Iraq and China. The evidence which came from the material culture soon proved them wrong. This provided no indication that centers of power existed within cities or at the level of a territorial state. There have been absolutely no depictions of rulers or even leaders discovered. The material culture offers clear indications that important decisions were being made and carried out with a great deal of organization, though. That’s right. They were communists! In addition to their distribution, the uniformity of artifacts like stamp seals and weights definitely supports this idea. The people of the Indus Valley Civilization were also buried with grave goods that were nearly identical in terms of both quantity and quality. While there was almost certainly some sort of state, the Indus Valley Civilization seems to have been structured very differently from the societies which emerged in Egypt, Iraq and China. 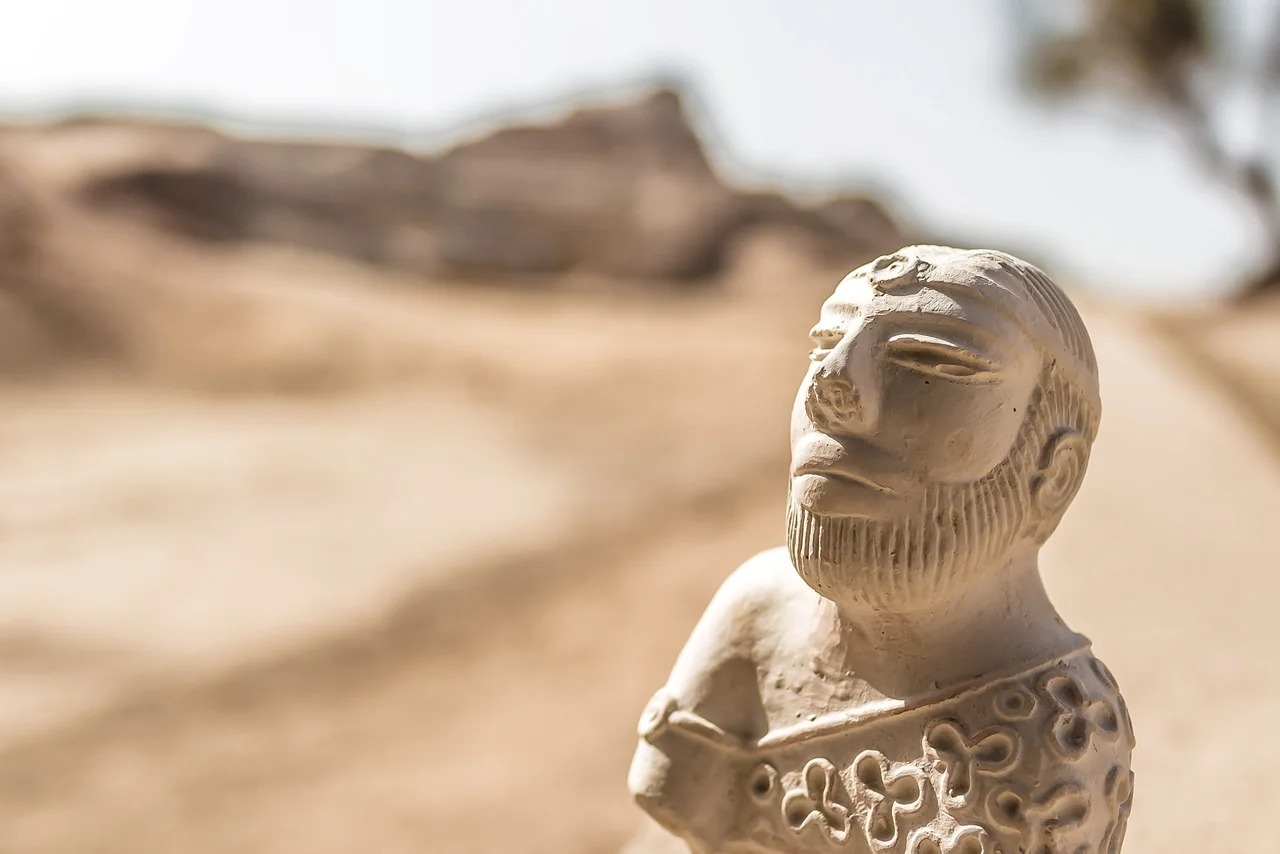 The best evidence for a lack of hierarchy in the Indus Valley Civilization comes from the architecture. The biggest cities like Harappa for example were constructed using an extremely consistent grid system, so they clearly benefitted from at least some form of urban planning. The presence of public facilities and what you could probably call monumental architecture also suggest egalitarianism. The cities of the Indus Valley Civilization benefitted from what are probably the first ever sanitation systems. These provided homes with fresh water and plenty of drainage. Some of the largest buildings were in fact bathhouses, but the people of the Indus Valley Civilization also pooled their collective resources into impressive dockyards, warehouses and walls. In contrast to almost everywhere else in the world at the time, no palaces or temples have been discovered. The inhabitants of cities like Harappa lived in clearly defined neighborhoods with people who pursued the same occupation, so the Indus Valley Civilization may have been organized around groups of individuals who came together by voluntary association. That’s right. They weren’t communists. They were anarchists! While some houses were a little bit larger than others, most of them were nearly identical in terms of both size and shape. These were almost perfectly square. Simply put, the architecture of the Indus Valley Civilization gives the impression of a society without significant wealth concentration. Everything was fair and square.

The rise and fall of the Indus Valley Civilization was closely related to the climate. While gradual drying of the soil seems to have initiated the process of urbanization around 3000 BCE, increased aridification resulting from weaker monsoons may have rendered the Indus Valley unlivable. The people who lived in cities like Harappa didn’t practice irrigation, turning instead to the relatively reliable monsoons for their water supply. The result was that cities entered into a slow decline as people were forced to abandon their homes and seek fortune elsewhere. This took place over the course of several centuries. The last inhabitants appear to have been herders who took refuge in what by this point in time were probably nothing but ruins.

While plenty of games have been set in Egypt, Iraq and even China, few at best have taken place in India. When it comes to the ancient world, this phenomenon becomes even more apparent. The big question then is why the Indus Valley Civilization has been so badly ignored by games. I don’t have a good answer for this, but I strongly suspect that it has a lot to do with the fact that games are mostly about power and control. How do you fit a society that was based on the principle of egalitarianism into a medium which has always been focused on domination? I hope that a clever designer comes along and solves this problem because I really think that more people should know about the Indus Valley Civilization. I also think that games have the ability to communicate ideas in a way that few other media can.

Let’s Talk About The Story of No Man’s Sky