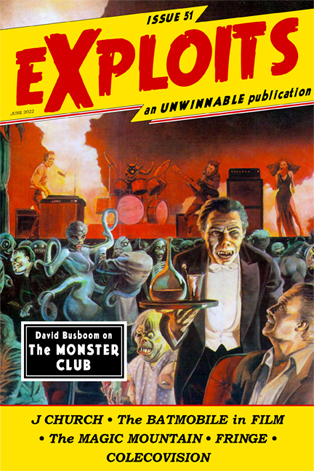 This is a reprint of the Movies essay from Issue #51 of Exploits, our collaborative cultural diary in magazine form. If you like what you see, buy it now for $2, or subscribe to never miss an issue (note: Exploits is always free for subscribers of Unwinnable Monthly).

The premise is spooky fun: horror author R. Chetwynd-Hayes (upon whose work the film is based, played by a visibly arthritic John Carradine) gets bitten on the street by a starving vampire (Price) who, as payment for the meal, takes him to “a place where [his] friends gather” for an evening of music, dancing and stories.

It’s a great setup. The only problem is that the stories themselves rarely entertain as much as the self-consciously silly, pop-horror framework. None of the three segments are bad, but at least once in each I found myself itching to return to the eponymous club, despite appearances by Donald Pleasance, Britt Ekland and Patrick Magee.

The real stars of the movie – perhaps even more than Price and Carradine – are the musical interludes. The Viewers and the Pretty Things contribute a pair of catchy theme songs while plastic-fanged werewolves and rubber-masked ghouls party under a spinning disco ball, but it’s B. A. Robertson’s “Sucker for Your Love” and Night’s “The Stripper” that will live rent-free in my brain forevermore.

The former is a jaunty Halloween spoof song, in which Robertson – in full vampiric paleface and dark jacket – humorously croons about his much-bitten girlfriend (“when I kiss and I fondle her/like making love to a colander”) with a stage presence that is equal parts cheesy and cool. The latter is quite possibly the best five-minute rock performance I’ve ever seen in a movie.

Night’s vocalist Stevie Vann – all bouncing red curls and Kathleen Turner confidence in a shiny black outfit – belts out an anthem from the POV of the titular Stripper, inviting men to come and see while warning them “there’s nothing you can say to take my pride away/I can be a lady and a stripper!” It’s a performance with enough heart and raw power to revive Janis Joplin, and frankly a little too good for the movie it’s in. But I’m so glad it’s there.

Carnage and Blood: Two Kung Fu Movies from Opposite Ends of the Genre’s Heyday, Both with Numbers in the Titles