(note: this review is based on the Speak Lies demo, as the full game has yet to release)

Speak Lies is a story about a probably cursed school and the band of students investigating its mysteries; one of which is you, the player.

Speak Lies opens with your character (whom I named Block) receiving a confusing, distraught voicemail from a young woman.  Moments later you begin receiving texts from another teenager named Amber, who’s mistaken you for a good friend meant to be helping her solve a gruesome puzzle.  Eventually Amber realizes her error and begins a discussion that leads to a shocking mutual realization: you’re not merely a wrong number, but rather an anomaly that shouldn’t exist in her universe at all.  And this is only the start of the mystery Amber and her friends became mired in.

Speak Lies is a well-constructed and immersive thriller, one which successfully juxtaposes horrific elements (like bloody murders and mutilated bodies) against the tranquil background of Vistine Academy.  Amber is happy to use messaging and photos to show off the prestigious all-girls academy to Block, bragging how being accepted makes a person and their family feel like they’ve “won the lottery.”  The renown and appeal of the school comes from a combination of advanced technology, highly individualized study plans, and a mysterious selection process that no one’s figured out the criteria for.  The grounds are state of the art, colorful, and carefully sequestered from the hustle and bustle of the modern world. (And as a slight aside, this VN looks gorgeous no matter where you go or what’s happening onscreen).  But even during the tour of such an idyllic setting, it soon becomes apparent that some things are amiss. 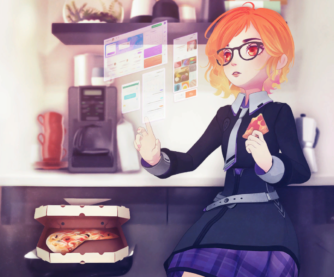 The discomfort presents itself in little ways, at first.  Vistine is a school that hosts not only students and faculty, but also a number of researchers with mysterious labs and experiments.  There are very few human workers in town; most restaurants in the nearby township are managed by robots.  Students can work at these restaurants and shops, yes, but only to earn Vistine Academy credits, essentially Monopoly money that’s wholly worthless in the real world.  The only way in or out of the academy is a single tram service; at least, that’s the only way accessible to students.  And then there are the ten rules of Vistine Academy that all students must follow, lest they succumb to a curse.

Speak Lies paces itself remarkably well, giving you just enough intel in each phase of the investigation to keep you wanting more. At the same time it constantly reinforces that every member of your informal mystery-solving squad knows different amounts and types of information, which they may or may not share.  Block knows the least amount of all, having only just been introduced to this world and only able to communicate with Amber.  Whole hours of the day will pass with Amber et al attending classes or partaking in their own extracurriculars, unseen to the player.  Meanwhile, Block can only message Amber and hope she’s willing to talk, or is standing close enough to someone that her Smartpanel transmits their conversation in text form.  Even then, not all shareable information can make it from one party to the other.  Block discovers very early on that audio can be received on their end but not transmitted.  Likewise, Amber can send still images or audio but not video files.  And even the pictures that get transmitted don’t always appear the same on Block’s end as they do for Amber, missing parts or having whole chunks cropped out.  Is it interdimensional data corruption?  Or something more sinister?

It’s difficult to make a plan of attack and feel like useful when you’re essentially being relegated to the rank of outside observer who occasionally offers input.  Block doesn’t have enough information to make truly informed decisions, after all.  And given that the player is clueless about the history and informal reputation of the school, it’s hard to understand some shortcuts in the girls’ conversation.  As a result, half of Block’s part of the investigation is merely playing catch-up to everyone else.  The rest of the time is a careful balancing act of choosing when to interject, if the player joins the conversation at all. 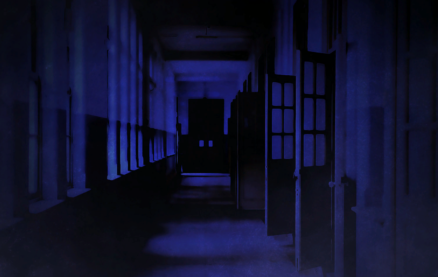 And conversing is all you can do.  Block cannot interact directly with the world or send any sort of information to verify who or what they are.  Their participation is necessarily limited by how involved the students of the academy want this mysterious stranger to become.  The girls most definitely want to investigate Block as much as Block wants to investigate the truth behind Vistine Academy’s deeply unsettling mysteries.  The real trick to the VN, then, is figuring out what Block’s role should be.  Are you better as a pushy investigator, encouraging the girls to insert themselves into increasingly dangerous situations?  Or should you simply sit back and watch the cards fall as they may, damn the consequences?

Speak Lies is still under development, but the demo is available for pay what you want on itch.io.  Please give it a try, throw money at the developer, Silent Clowns, and wait with me for more answers to come.