This feature is reprinted from Unwinnable Monthly #138. If you like what you see, grab the magazine for less than ten dollars, or subscribe and get all future magazines for half price. 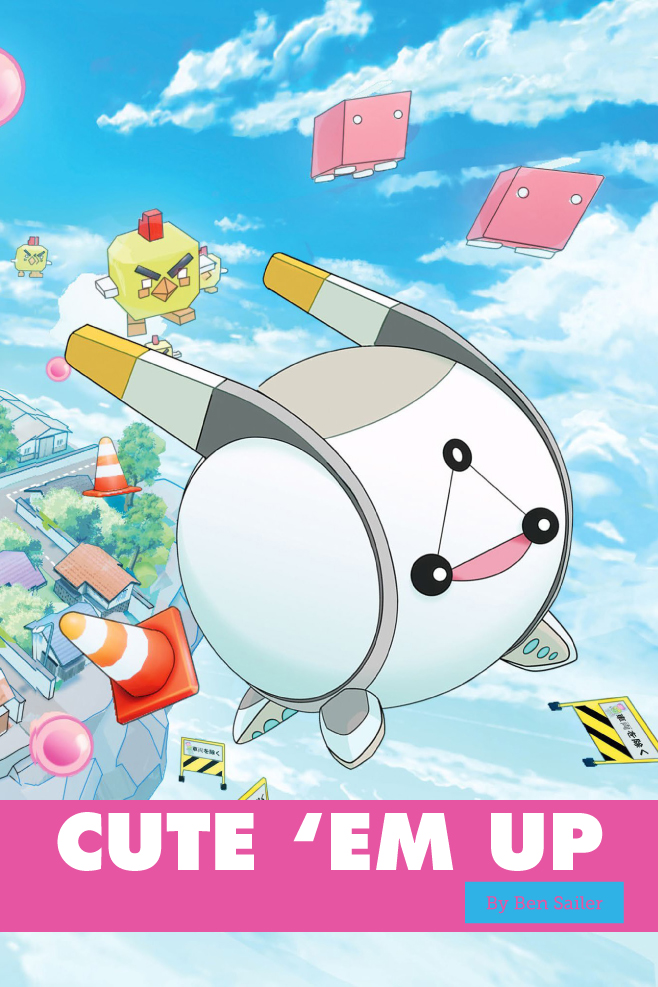 Post-apocalyptic tales are often dour and dark. They typically invoke images of square-jawed space marines and rag-tag renegades scraping for survival in the ruins of late-capitalist society. What else could life after the end of the world be like? The more real-world news headlines sound like dystopian science fiction, it’s easy to see how these cliches endure. It’s interesting to peer into alternate histories and fantastical futures that show us how the world could have been and warn us about what it might become.

Such subject matter doesn’t lend itself to sunshine and rainbows, but even so, it’s all become more than a bit predictable. Surely there must be room to explore a different kind of story about the annihilation of life on Earth, one where more than cliched character archetypes can survive, and disaster doesn’t deprive the planet of color.

Enter Forza Polpo, a forthcoming “first-person cute ‘em up” from Monte Gallo that turns those tired tropes on their head. Set in a visually vibrant Tokyo following a cataclysmic catastrophe, the game is a highly stylized indie shooter that places players at the controls of a laser-equipped delivery drone. At first glance, it looks and sounds like a sentimental love letter to early 3D game design and 1990’s anime, packed full of fast action and bright neon lights. It’s immediately attention-grabbing, if not revolutionary.

Yet Forza Polpo is about much more than what initially meets the eye. Beneath the surface, it reveals itself to be an ode to Japan’s lost decade of economic stagnation, a journey to find the meaning of life after civilization collapses, and a digital space to confront fears and anxieties through interactive play. It’s passion project in the truest sense, one that may be equally therapeutic for its creator and its audience alike. 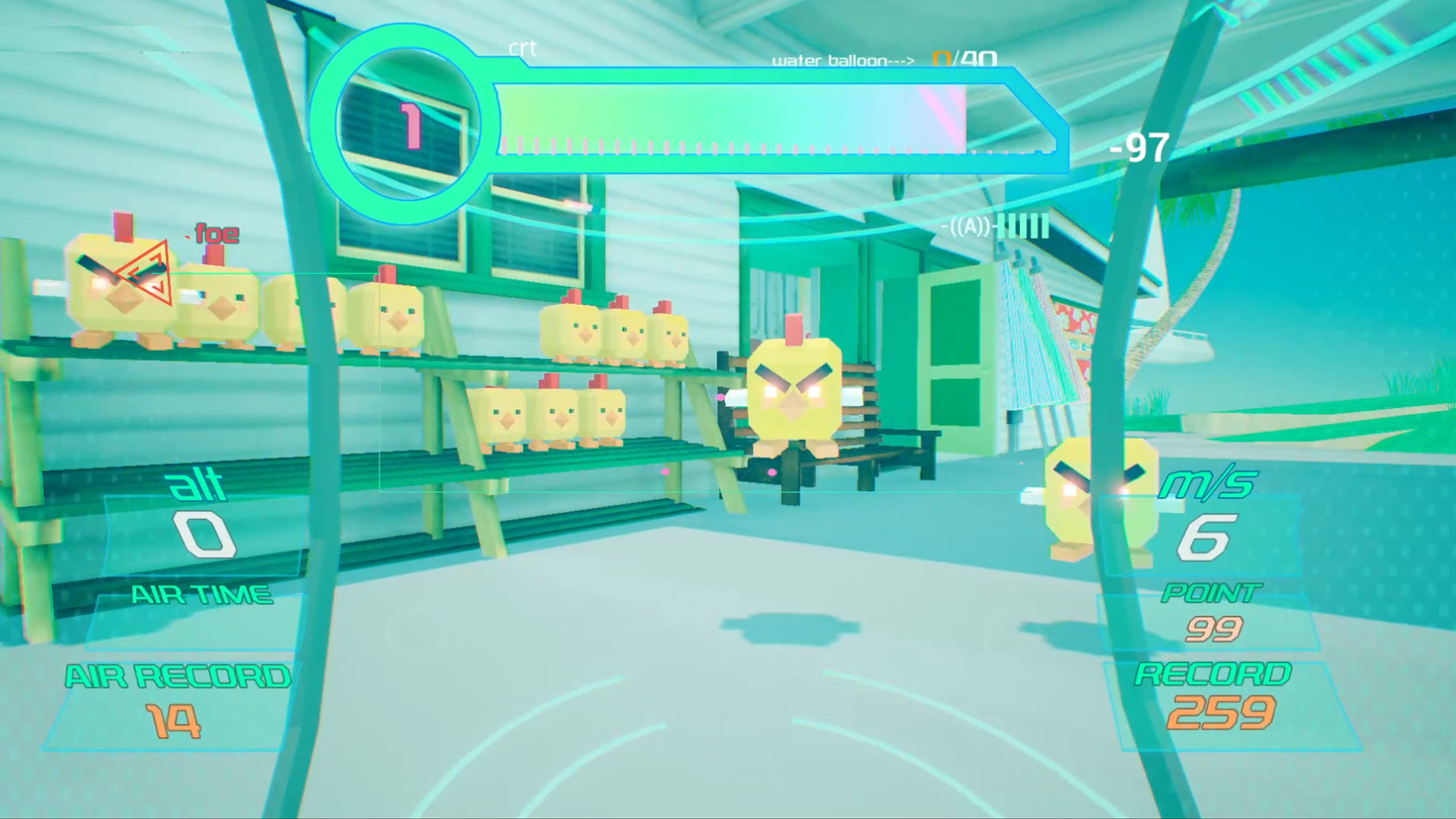 “Recently I received a message from a guy that told me his problems and said to me, ‘I would like to live in Forza Polpo’s world where everything is colorful and full of
sounds while listening to good music,’” Monte Gallo founder and solo developer Cristiano Orlando Graziani says. He later continues, “Forza Polpo mainly originates from my love of flying and my fear of heights. I have always been afraid of heights and have always loved video games that help me to face my fear.”

Before games, Graziani worked in cinema and VFX, where he learned how to use Unreal Engine to create virtual film sets and VR environments. Thanks to the toolset’s approachable learning curve, he felt confident using it to pursue his interest in video game development, and to bring his vision for Forza Polpo to fruition. Impressively it’s his first game project ever, and when asked about his game design background, he humorously responds, “There is none!”

“I have to say a huge thank you to Epic,” Graziani says. “It’s only because of their user-friendly engine that I can realize this project.” 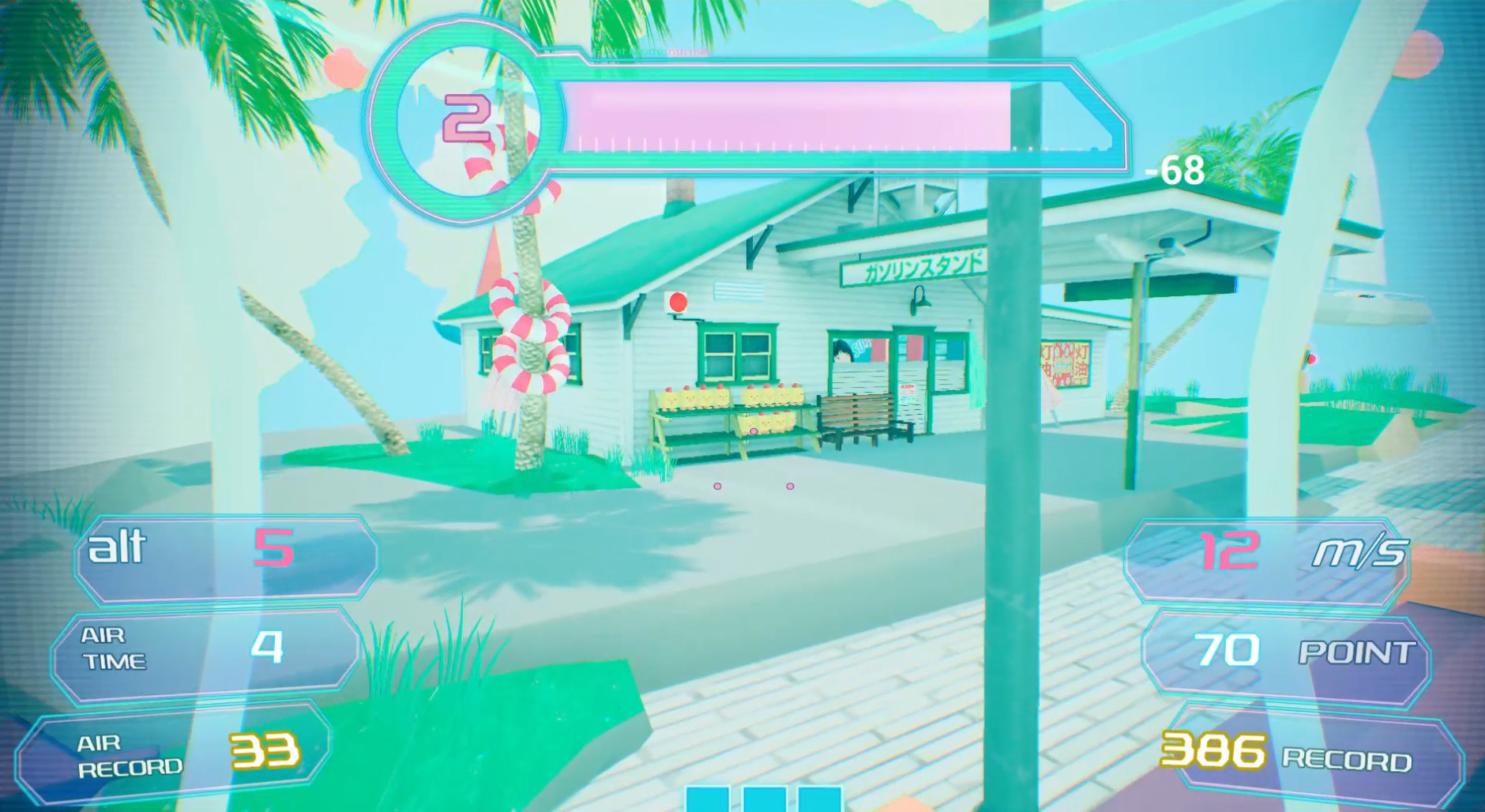 Forza Polpo’s story starts in the year 199X (an apparent allusion to a generic year in the 1990s) when a mad scientist named Dr. Prometheus invents something called “pink energy.” This discovery causes an explosion that destroys 99.9% of the planet and its population. All that’s left behind is a static world where time has become frozen and floating slabs of shattered ground are suspended in space, perfectly placed for hopping from one to another. Somehow, this doesn’t seem like a coincidence.

Players assume the role of a homebound child piloting Polpo via remote-control. They’re humanity’s last hope for survival, and in order to emerge victorious, they’ll have to defeat an army of enemy bots while collecting cubes that unlock memories about what happened at the time of the accident. It’s not all work and no play though. Polpo can pick up souvenirs to decorate the pilot’s bedroom and utilize kiosks to play music or obtain useful powerups (if he can find any that are functional).

Crushing evil and saving the world seem like tall tasks for a young child and their airborne robotic rabbit friend. Fortunately, a friendly video dispatcher named Mey provides the pair with important information before each mission. She plays a vital role in ensuring the duo’s success and it’s crucial to listen to what she says. The price for failure is literally the end of life on the planet (or, at least, what little is left of it).

The stakes are high, but if it’s any consolation, the remains of a ruined Earth have never looked more inviting. Forza Polpo’s Tokyo is full of blue skies and warm hues even amid heated firefights, and its pastel palette is a far cry from the urban decay one might expect from a metropolis torn asunder. While Graziani doesn’t cite the series as an influence in our exchange, Katamari Damacy’s lighthearted look feels like a suitable comparison.

Yet there are also visual cues which serve as reminders that this world has indeed been devastated. Vacant storefronts and stalled cars offer subtle signs that, for billions of people, life ended suddenly and without warning. A photorealistic take on the same circumstances would look considerably more like The Last of Us than, say, Wattam. The juxtaposition between its cheerful tone and end of the world setting is intentionally subversive and rooted in the understanding that Earth could potentially persist without people. 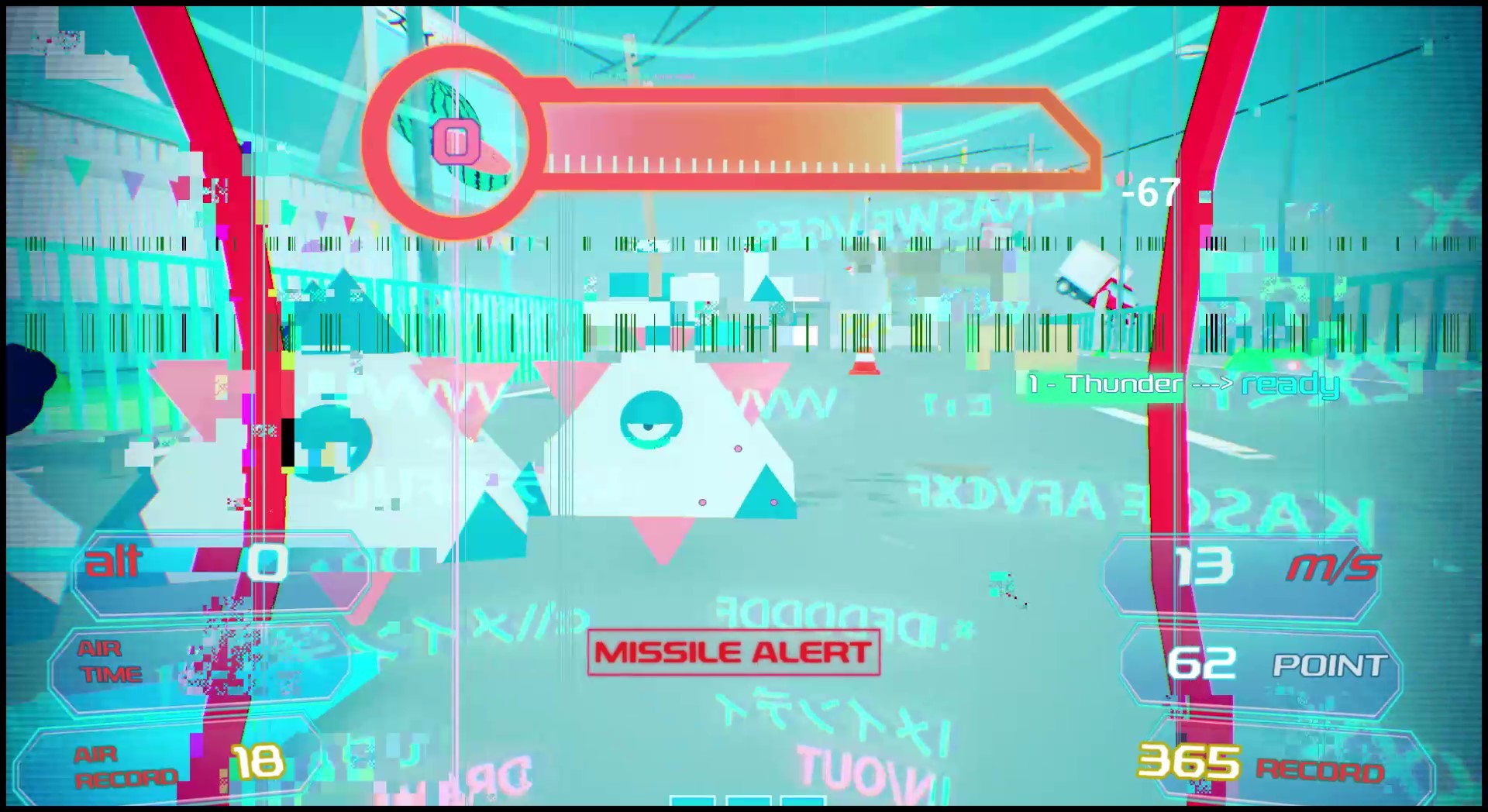 “Mainly, I was inspired by nature, which manages to remain beautiful despite what happens in humanity,” Graziani says. “I’ve always found it obvious, and in some ways easy, to combine a dark and violent design with an apocalyptic scenario.”

One could be forgiven for assuming Forza Polpo is meant to be a nostalgic nod to a bygone era and nothing more, both in terms of appearances and gameplay. However, Graziani makes it clear the game is meant for contemporary audiences. While it’s fully immersed in the sights and sounds of the 80’s and 90’s, he says players can expect a polished experience with modern mechanics that was made for 2021.

For starters, consider how Polpo gets around the game’s environments, which are both filled with danger and short on useful resources. Since Polpo’s battery and weapons both drain the same energy source, players will have to carefully choose between fight and flight. Graziani says finding the right balance is key to success and feels this is one of the most innovative elements of the game.

Graziani has also spent significant time tweaking Polpo’s physics to make them as realistic as possible. While he’s a fictional rodent-esque robot, his design was informed by the development of real-world FPV (first-person view) drones. Due to his small stature, he’s susceptible to strong wind gusts, collisions with power lines, and other environmental obstacles that will need to be avoided. This forces players to think strategically about how they move around each level, and thoughtless run-and-gun shooter tactics won’t go far here. 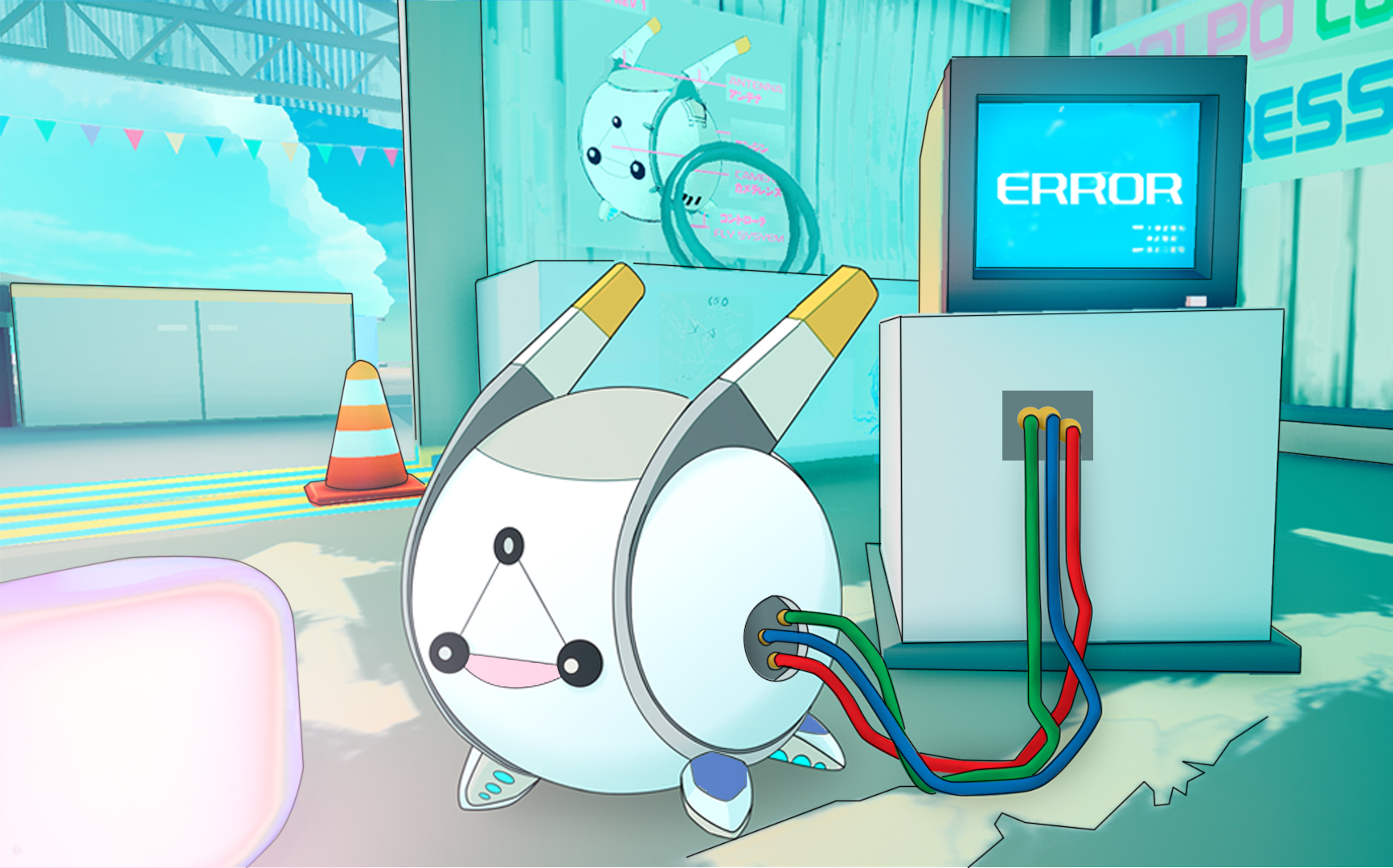 As a solo developer working on their debut title with only occasional outside help from freelance collaborators, Graziani says getting that difficulty balanced appropriately has been challenging. However, he’s making it a priority to produce a playable beta, which should help iron out difficulty spikes before shipping the full release later this year. While Forza Polpo lacks a firm release date, Graziani’s neo-Nineties take on post-endtimes survivalism should arrive on digital storefronts sometime in 2021.

“Of course, right now I’m the best Forza Polpo player of the world,” Graziani says, laughing. “My priority is to have an internal beta build, which will be the basis for the rest, including, I hope, future conversions for the console market. I’m considering a Kickstarter or Early Access on Steam.”

What’s waiting at the conclusion of Polpo and his pilot’s journey will remain a mystery until later this year. However, there’s a message at the beginning of the game that hints at Graziani’s vision for what he’d like players to take away from their experience. Like much of the rest of Forza Polpo, it’s something that seems like a contradiction of terms, but makes perfect sense within the context of its own subversive optimism.

“Bringing a bit of carefreeness into the lives of the players would be something that would make me very happy,” Graziani says. “A key element of Forza Polpo is the quote at the beginning of the game: ‘Only the weak can be brave.’ That is what I would like to pass. That it’s possible to face life with courage and to follow our dreams regardless of our supposed weakness.”