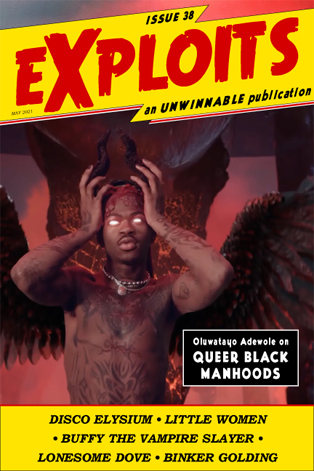 This is a reprint of the cover essay from Issue #38 of Exploits, our collaborative cultural diary in magazine form. If you like what you see, buy it now for $2, or subscribe to never miss an issue (note: Exploits is always free for subscribers of Unwinnable Monthly).

“I TRIED TO COME OUT THE DAMN CLOSET LIKE FOUR DAYS AGO AND NO ONE CARED HAHAHHAHAHA.”

Black men in the West are offered two models for existing and neither have room for queerness.

You can learn to use the hypervisibility of Black manhood as a weapon. Chest out, head high. Don’t let niggas disrespect you and break the facade. They are going to call you a violent beast anyway, so embrace it.

Or run. Shrink yourself in suits and ties. Neatly cropped hair. Cross your ‘t’s, dot your ‘i’s, hope that keeps you out of trouble. Pray that you can find the patience to ignore the look in their eyes when you raise your voice beyond a whisper.

In the last decade, Black, openly queer men in music have been breaking those archetypes down and twisting them to their advantage.

Frank Ocean’s music is playfully associated with DL (closeted) Black men. It isn’t explicitly for these men, but he does display a manhood which allows space for them. At the same time, he is still openly queer and there’s a softness to it – an ease in which it can be entered. Ocean isn’t completely deconstructing manhood, but he expands it and softens its edges.

Tyler the Creator pushes further, taking the hypervisibility of Black masculinity and using it to troll, playing straight men at their own game. When he says “I been kissing white boys since 2004” in the defiant I Ain’t Got Time, he takes a cheeky sexuality normally reserved for male/female engagements and flips it. This can be seen again in 2019, where he said “I like girls – I just end up fucking their brother every time”. He takes the messiness and aggro of being a man in rap but queers it – providing a bolder and louder avenue of existence.

Lil Nas X also uses his hypervisibility to troll, but fights entirely on his own terms in the language of the internet – a language which has been defined by the contributions of Black queer and Trans people. Following in the footsteps of figures like Prince and Little Richard, he crafts a manhood which is his own. He wears thigh high boots. He slides down a pole. He dyes his hair and wears glamorous wigs

“Montero” and its promo are the embodiment of that. He takes the homophobia head on, saying on Twitter: “I spent my entire teenage years hating myself because of the shit y’all preached would happen to me because I was gay. So iI hope u are mad, stay mad, feel the same anger you teach us to have towards ourselves.”

It’s a specific trauma that a lot of Black gay men have. Whether that’s in the church or in broader white society, the lesson is that a Black queerness should not exist, that the people who embody that form of existence are inherently evil.

Through these men and others like Billy Porter, a space in the culture is carved in opposition to the hatred. Ocean invites Black queer men to be vulnerable, Tyler tells them to get loud and Lil Nas X pushes them to fully embrace their aberrance.

At the end of his coming out letter, Frank Ocean wrote “I feel like a free man. If I listen closely . . . I can hear the sky falling too”. I hope all Black queer men get to hear that someday soon.