I used to fall asleep in my Minnie Mouse sheets thinking, When I wake up, I’m going to be Belle. I was five, and believed my transformation into the cartoon heroine from Beauty and the Beast could happen literally. The “how” was uninteresting. Even before Disney’s 1991 animated feature, I insisted my mother read, over and over, the picture book retellings by Jan Brett and Mary Pope Osborne. It wasn’t until much later that I read the Jeanne-Marie Leprince de Beaumont fairy tale on which they were based, and I still haven’t read the original, much longer, novella by Gabrielle-Suzanne Barbot de Villeneuve on which Beaumont based her fairy tale. Last month, I took a folklore class from The Carterhaugh School and found myself thinking about the eighteenth-century story all over again.

So, with my long-term literary and cinematic obsession, why did it take me until now to investigate Beauty and the Beast-inspired videogames?

I’m as disappointed to report this as you are to hear it. And, okay, I have absolutely not played every Beauty and the Beast game (Disney made quite a few in the ’90s). But I’m here to give you a breakdown of the ones I have played over the past month. Reader, I played these games so you don’t have to. 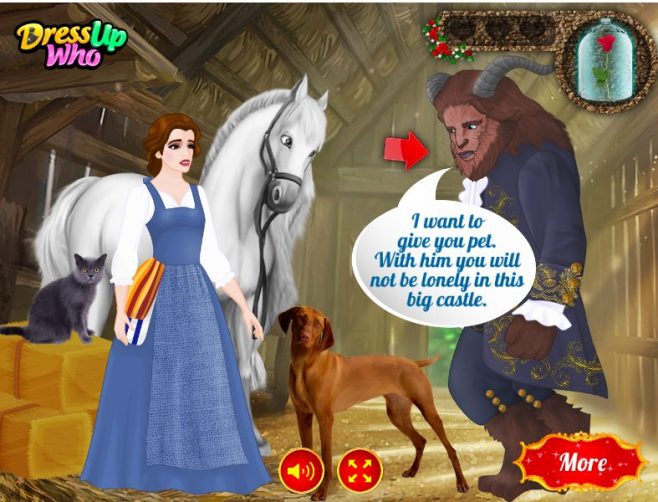 Beauty and the Silent Beast, an app from Lady Wizard, may be the most confusing game I have ever played. The Beast appears as different anthropomorphic animals (first a panda, then a horse . . .), and you level up by . . . tapping on roses . . . until he turns into a different animal? It’s difficult to progress without watching a lot of ads, and my pointer finger was getting tired, so I gave up after level three. The Beast was a sheep at the time, which seemed like a good stopping point.

Do you ever start playing a game and think, “Holy shit, I could be drunk right now?” That’s how I felt upon discovering Dress Up Who: Beauty and the Beast on Girl Games dot com. The description: “What it takes [sic] for this fierce beast to conquer sweet Belle?s [sic] kind heart? A lot of attention to details and a bit of something else? but let?s [sic] join them in to find out some more!” This flash-powered treasure only becomes a dress-up game if you, playing as the Beast, give Belle the correct presents leading up to the ball. The Beast shows Belle a dog, a horse, and – I don’t know, some other animal – and says, “I want to give you pet [sic]. With him, you will not be lonely in this big castle.” If you succeed in wooing Belle by remembering that she’s a tulip-hating horse girl, you get to pick her outfit for the ball. Wild.

If that’s not adventurous enough for you, why not try Baby Belle Dress Up? A totally normal thing to exist. I tried more Beauty and the Beast dress-up games than I feel the need to reveal but, despite my best efforts, I could not create a truly goth Belle. The closest I came was giving an Emma Watson-like Belle a pair of black horns and a bustier. 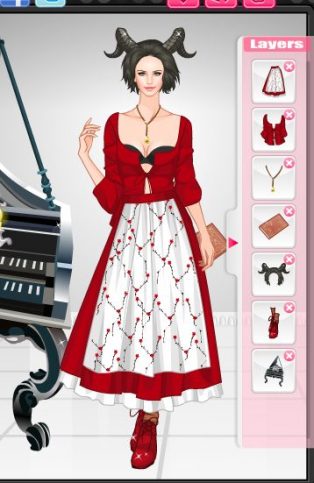 Are there Beauty and the Beast-inspired hidden object games? Yes, obviously. The first I tried was called Beauty and the Beast: Hidden Object Fairy Tale. Between hidden object scenes, you receive vague narrative updates about a woman in a floral crown referred to as “Belle” or sometimes “Bell.” The syntax leaves something to be desired: “The girl developed a feeling for the Beast and the spell got broken. The prince turned into a handsome young man over again [sic] and the plants started blossoming in the garden, the birds started singing.” Tap to continue, loser, we’re going puzzling.

The next hidden object game I played was Big Fish’s Mystery Legends: Beauty and the Beast. This had more money and design work behind it than Hidden Object Fairy Tale, and also told a different story. The Beast sexually rejected a hot enchantress; the enchantress broke his soul into pieces and said, “It shall remain as broken as my own heart until you come to love me!” As Belle, you naturally have to go find his soul shards by solving puzzles, just like Jeanne-Marie Leprince de Beaumont would have wanted.

Okay, okay, let’s go in a different direction. Path untaken, Beauty and the Beast is a text-based game on itch.io by Mélissa Rousseau. It begins with a content warning: “Some of the paths contain violence and abuse. This is not a game for children.” The narrative centers around Belle’s attempts to escape from the Beast, and the endings vary. After navigating Belle’s escape, I once landed on this finale: “Every week, you travel a little further. You never feel safe. You feel alone, you miss your father.” That’s it. It’s dark, even in its successful conclusion. In Mélissa Rousseau’s post-game explanation, she writes, “This game critiques the evolution of morals in our society. Because a film was well received in 1991 and has received awards, doesn’t mean it is not problematic today. My goal was to show the abusive relationship between Belle and the Beast.”

Whether or not you believe Belle had Stockholm Syndrome, I think we all know what she’d want to do in 2020: donate to legal aid funds and sign a petition to replace a Robert E. Lee statue with Oderus Urungus, a much more metal Beast.

Beauty and the Beast, Belle, Disney

America is Under the Dome