They built my high school in 1967. Because it was completed just in time for the one-hundredth anniversary of independence from Britain, some smart person decided to call it Centennial. (Canada became a country in 1867 after a proclamation by Queen Victoria). I wasn’t enrolled in 1967, though. I started attending in 2003. This means that my high school was 36 years old by the time I began my studies.

Some high schools are solid buildings, but mine definitely wasn’t made to last. I’m pretty sure that it was falling apart before I even set foot in the place. There were always a few broken windows. I still remember seeing signs of water damage on the walls. The times had changed since 1967, too. The population of my home town had more than tripled by 2003. Because this meant a lot more students, the classrooms, of course, were getting a bit crowded. The best solution was a new building, but nobody could find the money, so they did the next best thing instead. In other words, they put boards on the windows, patches on the walls and portables in the sports field. These were supposed to be quick fixes, but they wound up becoming permanent solutions. I don’t think that a single thing about my high school has changed since I graduated. The structure is almost exactly how it was.

Something similar seems to have happened in The Outer Worlds. Take a while to explore your surroundings in the game and you’ll come across plenty of boards, patches and portables. The story goes that colonists from Earth set up a series of settlements in a distant star system known as Halcyon. The majority of these were filled with prefabricated units meant for temporary accommodation. The company town called Edgewater provides a perfect example of this. They were only intended for use while things got up and running, so these buildings were presumably going to be replaced at some point, but nobody appears to have gotten around to pulling them down. I guess they just became the new norm. While it might seem strange to permanently live in a portable, some people apparently didn’t even bother to leave their colony ships. Groundbreaker was turned into a space station. The place is falling apart after decades of such adaptive reuse, though. The same could be said about the capital of the colony. The residents can be seen trying to make the city look presentable, but they can’t hide the fact that Byzantium is badly weathered and worn out. There’s only so much that you can accomplish with a coat of paint.

The Outer Worlds provides a reminder that quick fixes often become permanent solutions when it comes to architecture. Similar to my high school, some structures just end up lasting forever. The game is filled with good examples of this, but the best in my personal opinion are Edgewater, Groundbreaker and Byzantium. 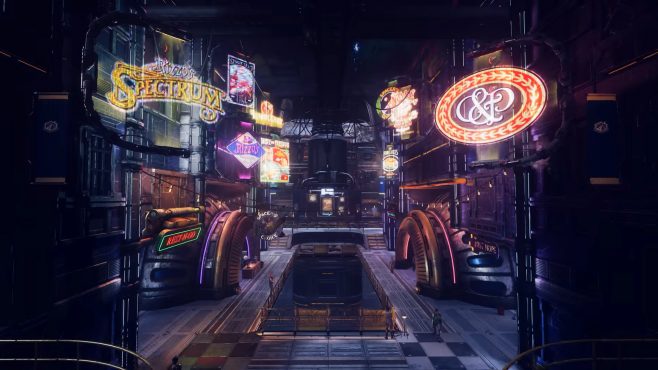 Edgewater is the first place that you’ll get to explore in The Outer Worlds. (The game actually begins on a colony ship called Hope which has apparently been stranded in space for several decades). Take a stroll through the settlement and you’ll come across a bunch of what are basically identical buildings. They come in several different shapes and sizes, but they’re all more or less the same. This isn’t especially surprising because they’re supposed to be prefabricated units. That’s right. Portables. They have all the hallmarks of portables, too. The structures seem like they were made in the same factory. The windows are identical. The doors are identical. The only distinctions between them are due to their modular design. (This in fact happens to be a feature of prefabricated units). They even have exposed wires and tubes like the portables on the sports field of my high school. In other words, people have been living in Edgewater for several decades, but nobody bothered to build any permanent structures.

Groundbreaker is a colony ship which has been turned into a space station through a process known as adaptive reuse. (Because it would take us on a tangent, I won’t talk about this in any particular detail, but the term describes how structures are sometimes put to use for unintended purposes). This makes it comparable to Edgewater in that people are supposed to have been living in a place for several decades which was only meant for temporary accommodation. There’s a bit more to the story, though. Take some time to explore Groundbreaker and you’ll come across quite a few other quick fixes that seem to have become permanent solutions. The signs of wear and tear are tough to miss. You don’t have to look very hard to find peeling paint and stains on the walls. You’ll probably notice a couple of open panels with sparks flying out of them, too. Groundbreaker is definitely in a sorry state, but people apparently prefer patching it up to replacing it. They can be seen doing this all over the place. 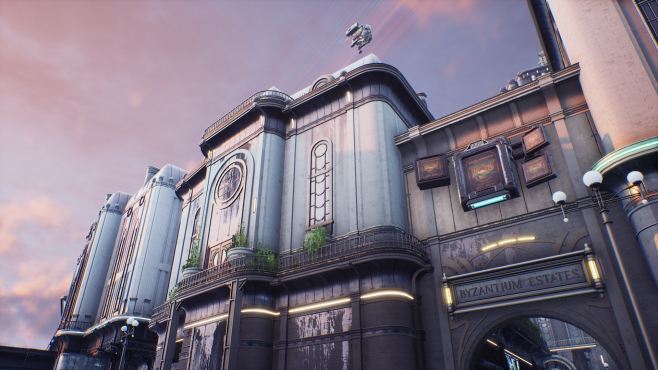 Similar to Groundbreaker, the capital of the colony, Byzantium, is a bit rough around the edges. There’s plenty of peeling paint and stains. You’ll find open panels with sparks flying out of them, too. These are definitely signs that Byzantium is in a sorry state, but if you can read between the lines, you’ll come across a couple more throughout the city. Some of these are pretty subtle. The boards on the windows hint that something isn’t quite right. The notices to the effect that renovations are taking place tends to suggest the same thing. (You have to wonder if these are actually meant to hide the fact that what you’re looking at are abandoned buildings). Byzantium is falling apart. Several of the structures need to be torn down, but they’re just being given a coat of paint instead. They’re getting a quick fix. Take a stroll through the streets and you’ll see this work being performed by a bunch of robots.

Edgewater, Groundbreaker and Byzantium provide a reminder that some structures just end up lasting forever. They really need to be replaced, but they’re given quick fixes that wind up becoming permanent solutions instead. You’re probably wondering why this happens.

In the case of my high school, the answer is clearly money. There just isn’t enough room in the budget to buy a new building. While it might explain many or even most cases, money isn’t the only reason why quick fixes often become permanent solutions when it comes to architecture, though. Since doing things the way they’ve always been done is a lot easier than making changes, people tend to put up with what they’ve got instead of getting something better. (You might say that a person at rest stays at rest). This can be seen almost everywhere. The Outer Worlds even provides a few good examples. The settlement is pretty poor, so money would probably explain the problems in Edgewater, but the same can’t be said about Groundbreaker and Byzantium. Because the people in them are supposed to have a bit of money, there must be some other force at work. The reason why they’re in such a sorry state can only be a lack of motivation.

The Beautiful Lies of 198X