I read and reviewed the original XOXO Droplets last year, and my opinion on the story hasn’t changed.  I still feel these characters are insufferable, I still consider the time management side of things to be a huge letdown, I still have no desire to play again and actively encourage others to seek out better visual novels/dating sims.  Truth be told, I’m not even sure how XOXO Blood Droplets managed to get into my Steam library, and the only reason I gave it a shot at all was morbid curiosity to see if a chibi-fied, humorous take on the story would produce any kind of improvement.  Much to my surprise, the answer was yes. 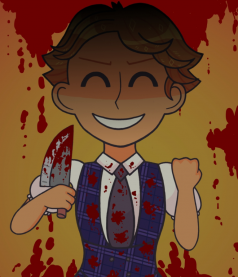 XOXO Blood Droplets takes its predecessor’s cast of horrible teenagers and manages to make them even more morally bankrupt by turning them all into potential or actualized mass murderers.  The main character Block starts off by giving the player a very brief rundown of the chain of events that led to her being a student at SSB, as well as becoming a member of her group of misfits who are forcibly drafted into socializing every month.  This time, however, the VN immediately presents a more sinister atmosphere as Block insinuates that some students at her school would be better off gone, and that several students have in fact turned up missing or worse. It only takes a few more lines to confirm that every potential romance option in the group has likely contributed to these cases.  Depending on which romance option you pick, Block will directly increase the body count even further.

As far as spoof visual novels go, I rather like XOXO Blood Droplets.  It’s much shorter than the original; you can get through a character’s whole route, good and bad endings, in under an hour.  Being on such a tight timeframe prevents the story from overstaying its welcome and keeps the humor from going stale, allowing each route to wrap up before you can truly grow weary of the characters and their myriad faults.  I found myself willing to make far more allowances for Block and the boys being absolutely wretched because they’re unrepentant ruthless killers, rather than desirable romance options I’m meant to feel endeared towards. Additionally, the supernatural elements of the story are inserted so seamlessly into the narrative that you just accept them without batting an eye.  Of course one of the boys is a soulless Frankenstein, you say, that perfectly explains why he does so poorly in social situations and can’t seem to ever dredge up an ounce of humanity. Then again, this studio also put out Lake of Voices relatively recently, a VN which I absolutely adored, so perhaps they’re better geared towards putting out horror than teenage romance regardless.

Weirdly, Block and the boys even have better chemistry in this version of events than in the original XOXO Droplets, although their relationships (on the good ending path, at least) largely hinge on Block murdering her way through the school campus to save her chosen beau.  The game runs smoothly; I didn’t encounter a single bug during my entire playthrough, which is far more than I could say for the original. There’s even a very nice mechanic which automatically takes you back to the last choice you made after hitting a bad ending, so you can immediately try a new course of action without having to reload a previous save.  I sincerely enjoyed reading this visual novel. And yet, I can’t find it in me to recommend this VN. 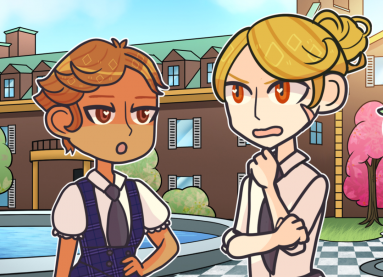 XOXO Blood Droplets makes an attempt to explain the events and history of Block’s schooling in this world, but to really understand the characters and have a firm grasp on what’s happening you need to have read the original XOXO Droplets.  You can’t appreciate the absurdity of this Jeremy poisoning random candies and bugging everyone’s room, for example, unless you went down his route in the original game and saw how paranoid and passive-aggressively vindictive he could be.  The humor of XOXO Blood Droplets in large part relies on a previous knowledge of the characters featured within; if I tried to read this before XOXO Droplets, I’d grade it as middling and underdeveloped because I wouldn’t understand many of the interpersonal relationships or Block’s inside jokes with some of the boys.

The closest comparison I can make would be with Parks and Rec.  Most fans of the show will insist that you need to power through season 1, because the show gets so much better after season 2, but you still need to watch those first 6 episodes to know who the characters are, understand what the deal is with the pit, etc.  I’m far more inclined to tell people to skip season 1 entirely and just read the wiki summary, because life is short and you shouldn’t have to waste valuable hours consuming subpar media in order to get to the enjoyable bits. To the best of my knowledge, XOXO Droplets doesn’t have the equivalent of this, as their wiki page is rather bare bones at this time and certainly doesn’t expound upon the intricacies of these characters and their many, many personal failings.  Ergo, recommending XOXO Droplets and XOXO Blood Droplets is the equivalent of telling people to spend over 6 hours on a lackluster story just to have approximately 2 hours of fun after.

That’s the conundrum of XOXO Blood Droplets.  On its own merits, I can’t recommend it.  As a followup visual novel, it’s rather delightful if you’re a fan of dark humor and the macabre.  However, it’s not nearly good enough to override my previous assertion that XOXO Droplets is a VN best avoided at all costs.  What that means is essentially, I can only recommend XOXO Blood Droplets to whatever unfortunate souls somehow fumbled their way through the original story and left wanting more.  Somehow, I feel that’s a rather small demographic.

XOXO Blood Droplets is available on steam and itch.io for free, although they plan to release paid DLC for additional character routes in the future.  I’m not going to tell you to power through the original VN, but if you already have, better things are waiting for you in this spoof.  Otherwise, do yourself a favor and go read Lake of Voices instead, which does a far better job of showcasing the caliber of material GB Patch Games is capable of putting out.