Futurama has been and continues to be one of my favorite TV shows ever, animated or otherwise, so naturally I could go on and on about almost any part of it. I won’t, but this time I want to talk about how the show approaches things like religious beliefs and faith. Because here’s the thing: despite it being a (mostly) humorous story that pokes fun of technology, capitalism, government, tourist attractions, parasites, evolution, college, holidays, time travel, literature and, yes, even religion, it approaches the subject of faith and belief with a surprising amount of care and insight. I’d go as far as to call it profound.

There are two episodes I want to focus on here, so let’s start with the one that came out first: season 4, episode 8, Godfellas.

After some comic mishaps while the Planet Express crew is fighting literal space pirates, Bender finds himself adrift in empty space with no hope of rescue. Then suddenly a chance meteor (asteroid?) shower livens things up, leaving him with a few dents and a big rock stuck to his torso complete with its own tiny humanoid civilization called “Shrimpkins” who see the surly robot as their God. Bender being Bender, this leads to various mishaps as first he gets involved in their daily lives and they become too reliant on him, then he tries to leave them to their own devices which makes them feel ignored and lose faith. 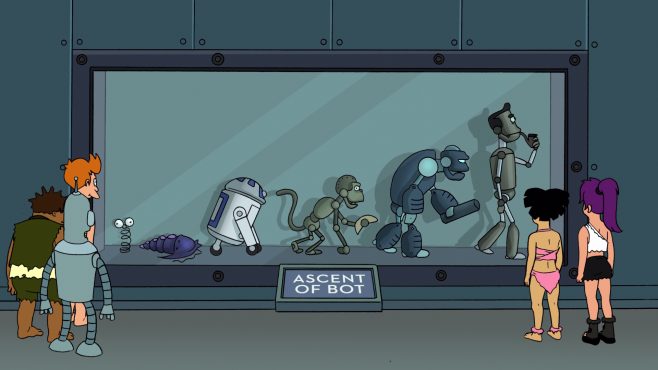 This could be taken on its own as a critique of how some will expect divine intervention, or how the faithful can lose faith when it feels as though they’re being ignored, but then Bender meets God (or maybe it’s the result of a space probe that collided with God?) and, well, the quotes kind of speak for themselves.

“… being God isn’t easy. If you do too much, people get dependent on you. And if you do nothing, they lose hope. You have to use a light touch, like a safecracker or a pickpocket.”

“Or a guy who burns down a bar for the insurance money.”

“Yes, if you make it look like an electrical thing. When you do things right, people won’t be sure you’ve done anything at all.”

This idea comes back around at the very end of the episode as Bender is returned to his friends on Earth and uncharacteristically decides to go back to the radio telescope monastery Fry and Leela were visiting, in order to free the monks they left locked up in order to use said radio telescope because “You can’t count on God for jack! He pretty much told me so Himself!” And as Bender makes his way back to the monastery to free those monks, we’re zoomed out across the galaxy back to the God Entity, who chuckles gently and repeats that last line.

Despite all the goofiness and shenanigans the episode caps everything off with this simple but very effective summary of faith. How, really, there’s no way to know for certain whether something happens due to divine influence or just coincidence, but that doesn’t necessarily mean that faith in the divine is misplaced.

And then there’s season 6, episode 9, A Clockwork Origin, which looks at the concepts of both evolution and creationism (they call it “creaturism” in the episode but it’s totally creationism) and asks “Why not both?”

Professor Farnsworth gets into a heated argument with Doctor Banjo, a talking orangutan rival, over the idea that humanity was basically plopped down on Earth by an almighty creature in the sky. As you’d expect the man of science is rather annoyed to find that a peer would ignore – or straight up try to disprove – evolution, so he decides to abandon Earth and go live on… I think it’s an asteroid or something? It has a breathable atmosphere anyway.

As Farnsworth is preparing to spend the rest of his life in solitude where humanity won’t get on his nerves, he pours a vial full of nanobots into a nearby pool of liquid so that they can remove any impure chemicals or minerals and provide him with a clean source of water. Then, rather unexpectedly, those nanobots begin to evolve – first into robotic plant life and small trilobite-like robotic creatures, then into fully-fledged robotic dinosaurs and eventually even robotic neanderthals.

Despite what’s happening right in front of him on fast-forward (robots do everything much faster than humans, you see), Farnsworth refuses to acknowledge this as a Darwin thing and instead insists that it’s developmental growth and natural technological advancement rather than actual evolution because he’s the one who set the nanobots in motion. This, of course, doesn’t go over well with the newly-developed robot society that literally sprung up overnight.

The whole thing caps off with Banjo admitting that the robots did indeed evolve, and Farnsworth acknowledging that it could be possible for life on Earth to have been kickstarted by an outside force before it began to evolve on its own. The two academic rivals are able to form a new theory that combines both “creaturism” and evolution into one, and it totally works within the context of the episode. So once again we come back to the God Entity’s words of wisdom to Bender as they discussed godhood itself. While evolution has a ton of science to back it up, it’s not all that difficult to take it on faith that maybe – just maybe – some things were actually set in motion rather than happening on their own.

Something that impressed me about Futurama back when it was still on the air, and continues to impress me, is just how nuanced it can be under all the surface level jokes and pop culture references; how it can make you start to ponder things – serious, real world things – if you keep a sharp eye and an open mind; and how it can address things like spirituality and faith in unexpectedly clever ways.

“When you do things right, people won’t be sure you’ve done anything at all.”