In July, I wrote about Hayao Miyazaki’s Nausicaä of the Valley of the Wind, one of his earliest films and one that reflects a devotion to environmental themes that has lasted throughout his entire career. Miyazaki initially conceived of Nausicaä as a manga, however, and began creating it well before the option to adapt it to film came across his desk. While the film is excellent, Miyazaki’s story and its reflections on ecology and society are perhaps most resonant in their original form.

Though Nausicaä the film is an adaptation of Miyazaki’s own manga, in execution the two feel like very different projects. At the time of the film’s release in 1984, Miyazaki had written only the first few chapters of a saga that would continue well into the 1990s. The film turns those first chapters into a self-contained story and finds a compelling conclusion for it, but the majority of the manga’s plot concerns characters and communities that don’t exist in the film. 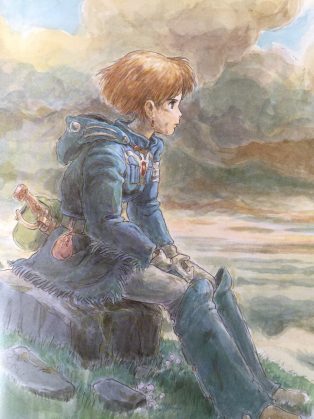 Miyazaki worked on the Nausicaä manga sporadically for over a decade, concluding the series in 1994. The demands of his film production schedule led to frequent, months-long interruptions in his writing and publishing schedule, so he allowed his conception of the story to evolve to reflect changes in his own thinking and artistic interests, rather than force himself to adhere to any structure put forth years earlier. The result is a series with startling ambition and dexterity. It never feels weighed down by the volume of story or quantity of characters.

It’s an interesting contrast to his most famous works. Miyazaki’s films work capably within the formal constraints of a feature-length film. His stories often gesture toward rich fictional worlds without getting sidetracked by backstory or minutiae not relevant to the main plot. And they’re pretty quick: most of his films have a runtime around or under two hours; his longest, Princess Mononoke, is two hours and fourteen minutes with credits.

Given this context, it’s fascinating to see what he does with a long-form medium. Miyazaki uses Nausicaä’s thousand pages to explode all of the limitations placed on the film, and the scope of the narrative – and the lore that encompasses it – is enormous. The world he creates is likely as vivid and detailed as those in the major literary works of fantasy and science fiction. Miyazaki often advances the plot at breakneck speed but balances this with examinations of the histories and mythologies, accumulated over centuries, that influence his narrative. The series feels comprehensive, and the final result may be Miyazaki’s best work in any medium.

One of the themes at the core of this epic is the temptation of nihilism when faced with environmental ruin that seems insurmountable. Miyazaki examines why this desire to give up can be so overpowering and why it can feel like the only rational choice left. But his protagonists do not succumb to it. This rejection of nihilism is a recurring theme in Miyazaki’s work – it appears in Princess Mononoke, for example, when widespread destruction inspires a renewed resolve within the protagonists to forge a better future. In Nausicaä, however, Miyazaki uses the affordances of a serialized structure to explore the concept at greater length than in any of his films. His characters face not one catastrophe but an evolving series of calamities that threaten, in an absolute sense, the survival of their species.

These crises are interconnected and entangled. As in the film, the world of the series is post-apocalyptic, one in which human populations have dwindled, the flowering of plant life creates toxic air and arable land is scant. Resource scarcity informs violence and war among the remaining communities, and the weapons some nations use against each other lead directly to more ecological devastation, furthering the vicious cycle. At the series’ outset, the situation is already bleak. As the story develops, the Sea of Corruption – a forest of poisonous wildlife – rapidly expands, overtaking more than half of the habitable land left on the planet. In so doing, it extinguishes cities, towns and lives. 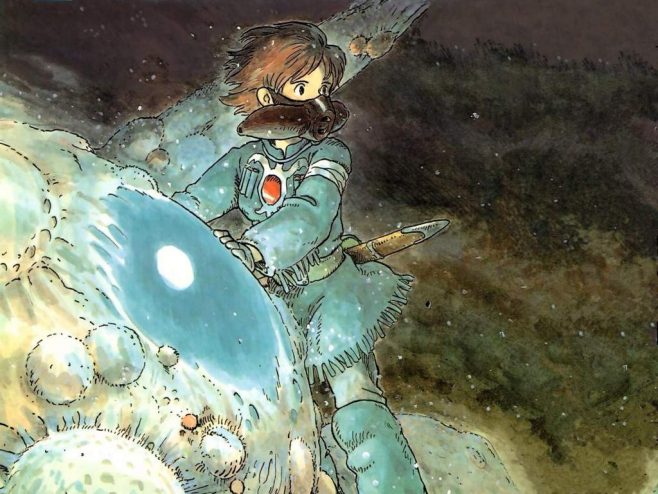 Miyazaki depicts these developments in detail for his readers; his series doesn’t shy away from the real repercussions of the conflicts he sets in motion. His characters face these tragedies with full awareness, as well. The most vibrant illustration of this resides in the character of Nausicaä, the princess of a small nation in the Valley of the Wind. Nausicaä’s personal journey is one in which her hopefulness and her faith in the goodness of other people are tested consistently. She repeatedly finds herself given opportunities to abandon her mission and accept that there is nothing to be done in the face of extinction. Miyazaki uses these moments to stage serious debates about the emotional and philosophical effects of ecological collapse on a society.

Nausicaä is not portrayed as naïve or recklessly optimistic, but resolute. Her refusal to concede existential defeat grows from her remarkable capacity for empathy, which extends toward all forms of life. Her perspective is infectious. It renews the outlooks of those she comes into conflict and collaborates with, and characters that initially appear jaded may later find fresh motivation to do better thanks, in part, to Nausicaä’s efforts.

The manga’s storytelling format allows Miyazaki to explore the depths of this dual environmental and societal crisis in ways that he can’t elsewhere. It is a grimmer, more unsettling story than those in his filmography. But this also means that the story’s heights – its affirmations of human courage and potential – can be even more outstanding. The manga’s ending is less cheerful, offers a less clear resolution than the film’s. But the hope that breaks through resounds with that much more volume.

Hayao Miyazaki, Nausicaa, Nausicaä of the Valley of the Wind

Pacesetter’s Chill, and an interview with Nathan D. Paoletta