Everyone thinks that they’re in traffic, but the truth is we are the traffic. This is the lie of driving, and part of what kept me away from learning how for so long – driving is freedom, and everyone else is just in your way. In most of the US that isn’t a big city with a functional transit system, learning to drive a car is understood as necessary for independence, but I’ve always seen car ownership as a ball-and-chain, a six-cylinder albatross. If you need the car for everything from getting to work to picking up groceries, if your very neighborhood is built to accommodate automobiles over footpaths, then you are merely free to make payments, deal with insurance, try to remember which gas stations don’t have skimmers on the pumps, pray that today isn’t the day you break down on the interstate. Driving is responsibility, not freedom.

Still, I dream of the actual sense of commanding space and time through piloting a vehicle. The metaphor of unbridled maneuverability, casting out for fresh spaces without a care, an extension of my faculties and sense through the miracle of machinery is something worth craving, and very much why I first fell hard for games like Pilotwings, Star Fox, the Rogue Squadron X-Wing games. But it’s not a fully-fleshed sim I’m after, which is why I struggled with Tie Fighter and anything requiring more than a controller. Sit me in the metaphor, paint a few layers between the fiction and the reality, so that I might better experience the implied bliss.

So when my Unwinnable colleague Sara Clemens passed along a demo for Jet Lancer, I felt the rush of oncoming g-forces. Not just for my established love of well-wrought sprites and some truly elegant low-poly models, but certainly sweetened by the obvious (and very necessary) upgrades to the recent-ish Luftrausers. Both are 2-D dogfighters, though the latter is a little too sepia-toned in its iconography and shallow in long-term playability, whereas Jet Lancer is saturated in a Saturday-morning palette with a much larger variety of arenas, enemies and weapon types even in demo form. It’s a game that provides a tangible sense of the freedom promised by car ads, an augmented power to soar through the clouds on an intuitive level, if you grew up holding a controller at least. 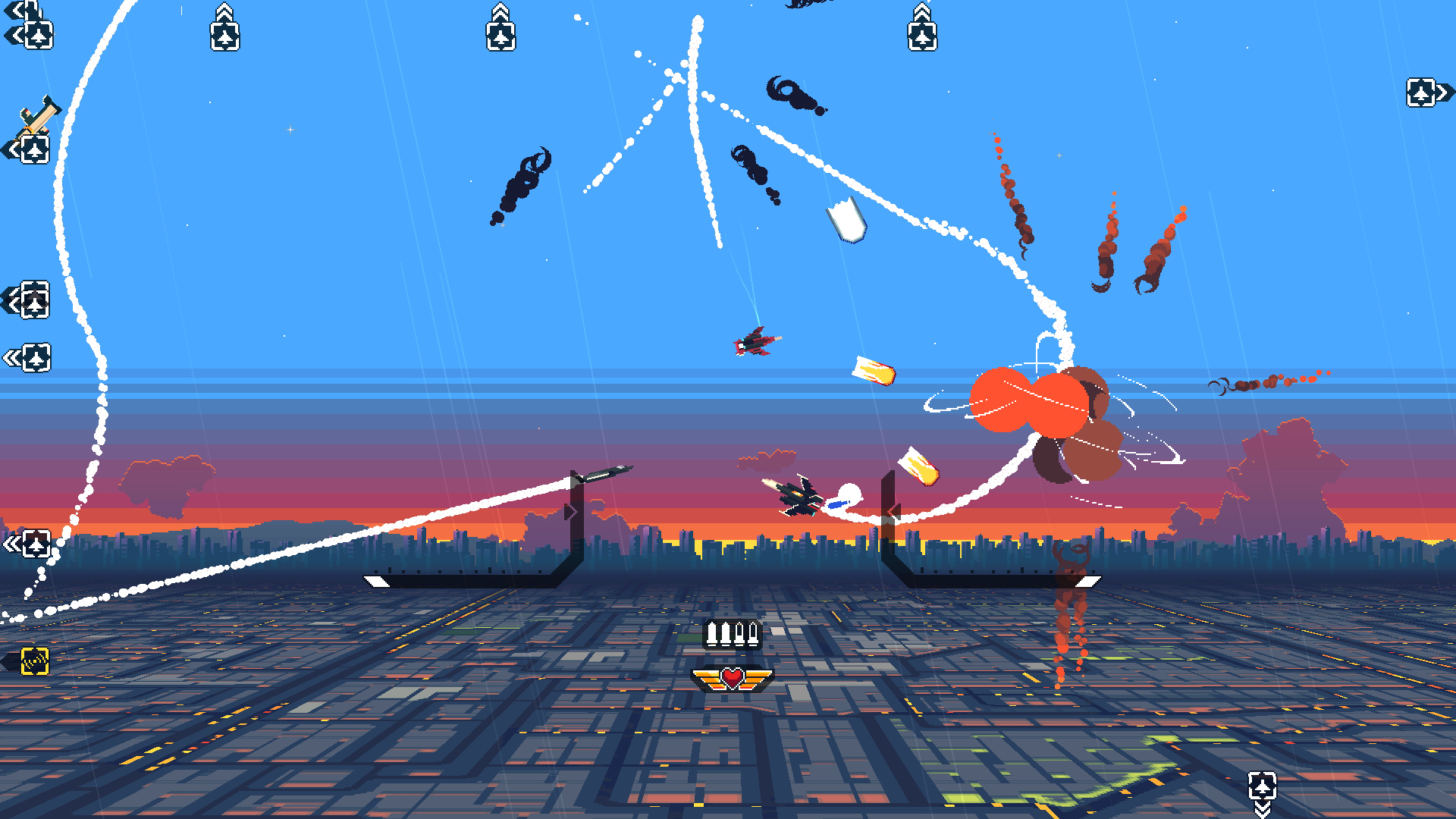 You’re a hot-shot pilot wiping up sky pirates and investigating old world tech and mechs, with a talking cat and an old sailor captain cheering you along. These extra touches are charming if not revolutionary, but that’s OK, because Jet Lancer knows why you’re really here and is great about throwing you in the mix immediately. There’s a minor tutorial and occasionally the captain will chime in to remind you about your special weapon if you aren’t using it regularly, but otherwise it’s you versus wave after wave of jets, boats and, eventually, crazy bosses. And through it all you’ve got to wind and strut on a sky-blue dance floor, zipping between bullets and rolling around misses to grant temporarily boosted bullets.

I just happened to start playing Jet Lancer the same time as I began Ace Combat 7, essentially the same concepts applied in 3-D (with a billion more polygons) and a bewilderingly compelling visual novel/podcast tacked on as well. While this one hews much more closely to a simulator-like experience, with more complicated control options as well as a few cockpit views if you’re so inclined, the real thrills from both games come from skimming across your enemies bow, a stunningly precise machine-gun takedown, zipping and zooming with (almost) total control of the machine, an extension of your own senses as you slowly sharpen your reflexes.

But both AC7 and Jet Lancer spike my adrenaline when I’m allowed to drift from the complexity and merge all of my faculties into a flow of beats. Jet Lancer in particular flattens the third dimension into two with a juicy deftness, not too slow nor too fast, not too real nor too diluted, threading the line between sim and bullet hell shooter. This demo has me salivating more for the skies, to escape the drudgery of four-wheels, to grasp the true potential of pixelated jet propulsion. 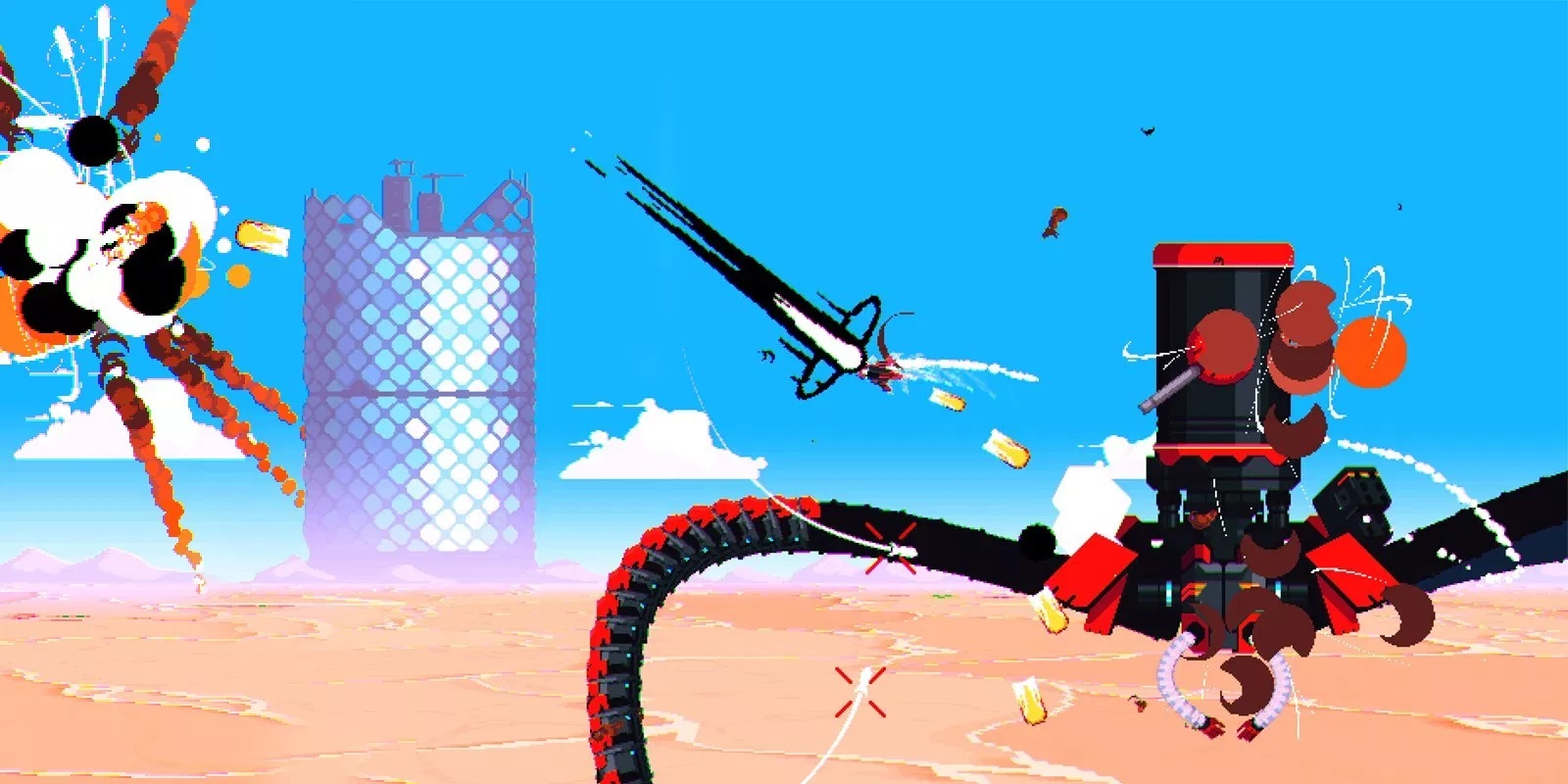 Putting the “U” in Trauma