There’s something strange about the dockworkers in Dishonored 2. It’s not the way they talk, though – it’s the way they walk.

Take a look at how dockworkers like Ramos hold their bodies and then do the same for nobles like Luca Abele. You’ll notice absolutely no difference. Laborers and capitalists move in exactly the same way. They walk the same walk.

The character models and voice acting in Dishonored 2 are pretty much perfect. You can identify laborers by their scrimshaw tattoos and raspy speech. You can identify capitalists by their fancy clothes and refined accents. Telling these two groups of people apart by how they look and sound is a piece of cake, but separating them based on how they move isn’t quite so simple.

Since they move in exactly the same way, laborers and capitalists in Dishonored 2 seem strangely similar even despite their obvious differences. Why? The answer is that how you hold your body communicates quite a bit about your background. Coining the term habitus to help explain the concept, this idea was first formulated by a sociologist called Pierre Bourdieu.

Bourdieu described habitus as comprising “systems of durable, transposable dispositions, structured structures predisposed to function as structuring structures, that is, as principles which generate and organize practices and representations which can be objectively adapted to their outcomes without presupposing a conscious aiming at ends or an express mastery of the operations necessary in order to attain them.” What does this actually mean? The concept in question is thankfully more simple than it seems. 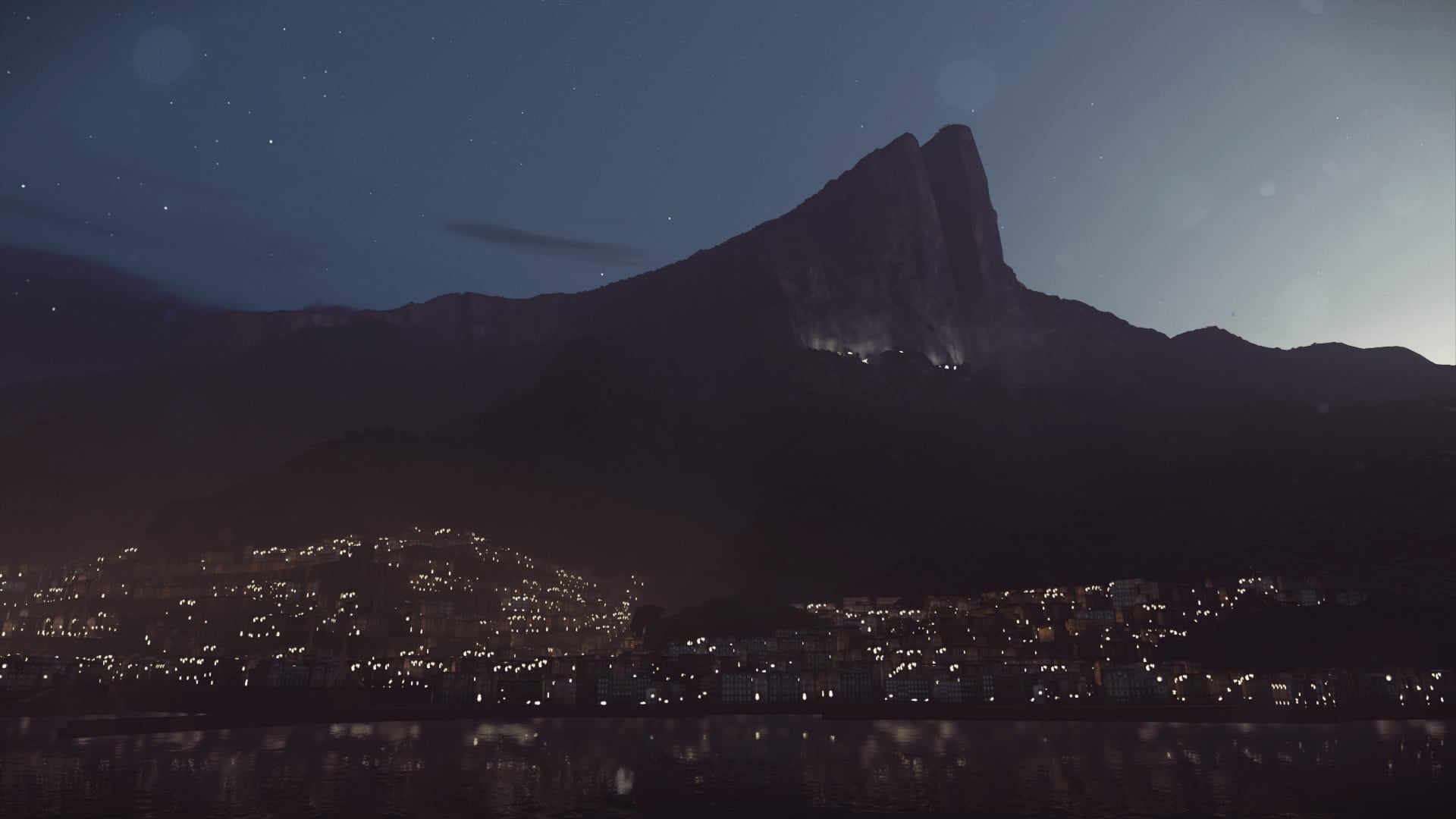 The term habitus refers to the temperaments which determine how a person perceives, interprets and interacts with the world around them. These temperaments are primarily expressed in the way people move. You’ll see no such difference in Dishonored 2, though. Ramos and Luca Abele provide a pretty good example of this.

Walk around the Campo Seta Dockyards and you’ll come across all kinds of interesting characters. There are plenty of soldiers and sailors, but it’s the dockworkers that really stand out. They’re tough to miss. You’ll probably hear their harsh voices before they come into view, but you’ll find most of them covered with a combination of blood, sweat and seawater. Their clothes are about as filthy as you’d expect. Some are actually nude from the waist up, so you can see the intricate patterns which they’ve inked onto their skin. These mostly depict monsters, but compass roses and pierced hearts are pretty common, too. Dockworkers clearly aren’t supposed to be classy. 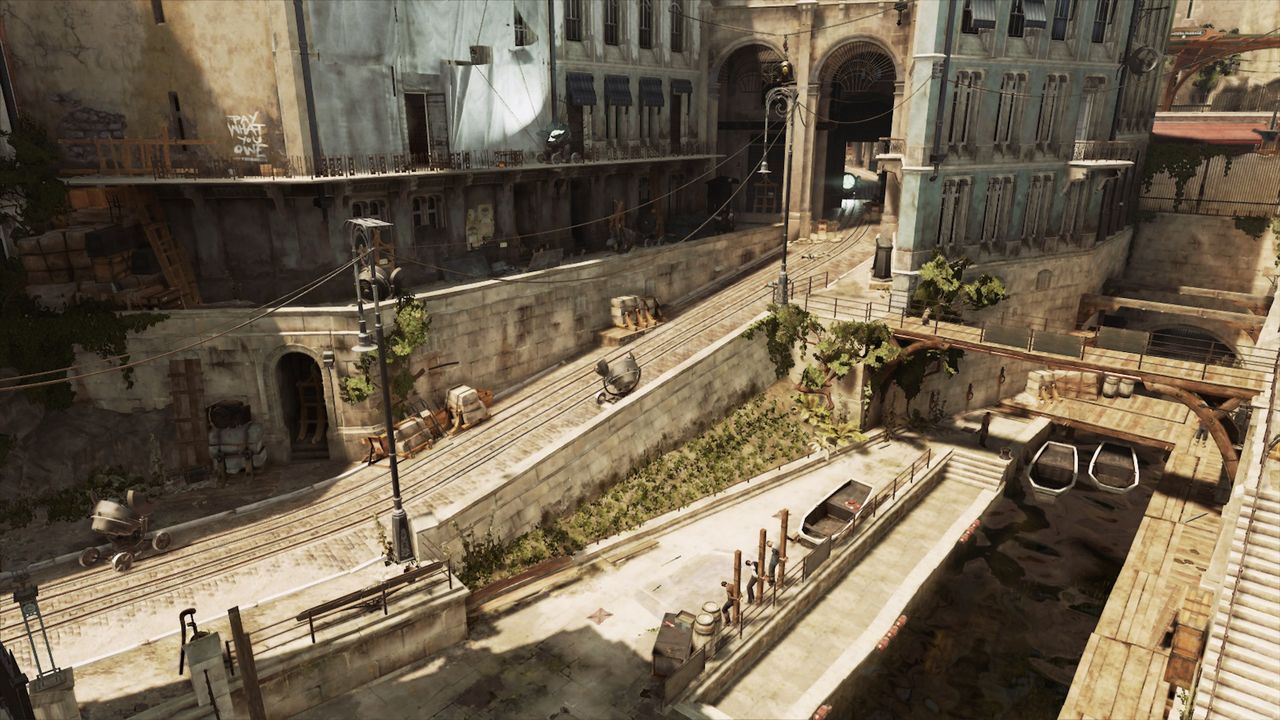 Ramos is definitely a typical dockworker. With his dirty shirt and tired voice, there’s absolutely no mistaking him for a noble. His arms are completely covered with coal dust. He has about a quarter inch of stubble on his cheeks. You’ll even come across him wearing a pair of work gloves and a paddy cap. You can easily tell that he’s a laborer based on how he looks and sounds, but there’s nothing about how he holds his body which would betray his socioeconomic status. While he definitely moves, he doesn’t do so distinctively. Ramos doesn’t stumble. You’d probably never pick up on this if the only subjects of comparison were other laborers, though.

You’ll come across plenty of nobles in the Palace District. Listen to their conversations while you sneak through the streets and you’ll hear them talking about politics in some pretty pretentious terms. Their looks hardly make them seem humbler. They’re all neat as a button, so you definitely won’t be finding any traces of blood, sweat or seawater on them. You won’t be finding any traces of tattoos, either. Sporting clean clothes and shiny shoes, they stand out from dockworkers like stars in the night sky. Some of them are even wearing huge hats covered with ribbons bows, and flowers. In other words, these nobles are meant to be something special. 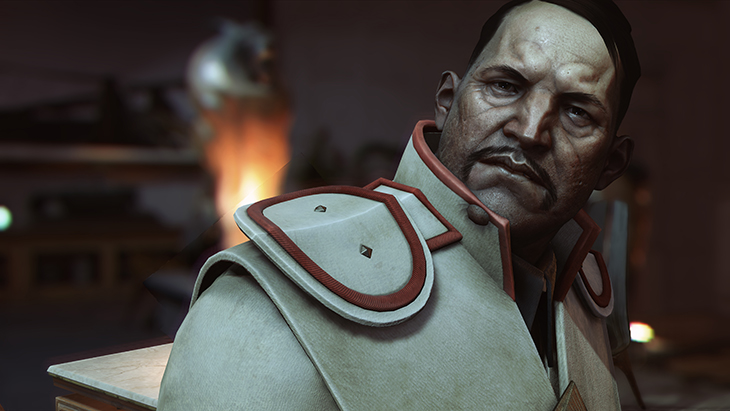 Luca Abele is pretty much the perfect opposite of Ramos. As the Duke of Serkonos, he’s supposed to be at the top of the social hierarchy, so it’s hardly surprising to find him in a crisp suit rather than soiled coveralls, but something about the guy still seems particularly grand. You won’t find even a speck of dust on his clean clothes. He speaks like you’d expect. Similar to Ramos, you can easily identify him as a noble based on how he looks and sounds, but there isn’t much about how he holds his body which betrays his socioeconomic status. Luca Abele doesn’t strut. He actually moves in exactly the same way as Ramos. This presents a problem for several different reasons.

The development studio responsible for Dishonored 2, Arkane, made laborers and capitalists move in exactly the same way. This reuse of animation had the effect of weakening the socioeconomic distinctions which appear in the character models and voice acting by failing to differentiate these two groups of people in terms of their habitus. There’s more to this than you might think.

Animation shouldn’t be an underappreciated aspect of game development. Why? The answer is that how you hold your body betrays things like your socioeconomic status. Laborers typically stumble. Capitalists tend to strut. While it may not seem like a big deal, this actually has important implications when it comes to building worlds like the one in Dishonored 2. Social tensions don’t stand out when everybody in the game seems strangely similar. Characters simply aren’t convincing when they don’t walk the right walk. They need habitus. Animation should, in other words, be given every bit as much care and consideration as character models and voice acting by development studios like Arkane. The result would be much richer worlds.