I dislike walking. I’m open to it as a concept, especially when paired with idyllic landscapes and destinations unknown. The idea of a walk always seems nice in your head, sure. Present me with the choice on any given day though and honestly, I’d rather just not. At all. No thank you. Scotland’s sunny day quota only really stretches to about 20 days a year. So when I look out of my window and see it’s dreich and probably pure Baltic, knowing it’s all about to kick aff doon toon because the football’s on, walking can get tae fuck.

While I sit at home not walking and pushing all of the dangers of a sedentary lifestyle to the back of my mind, I’m living my walking fantasies vicariously through games. Absolver is a game about learning sweet martial arts techniques and then custom building your own combos and fighting styles. You mix and match different kicks, jabs and feints in the hope of vanquishing your always numerous foes, while at the same looking incredibly badass. It’s a game about walking insomuch as the walk is the delivery method for your next stunning elbow strike to a masked face.

When I play Absolver I like to go for a walk. Minus the spin kicks.

Admittedly I’m not very far into the game, probably because I walk everywhere. It’s a game with a kind of low detail aesthetic, with bright colors and uncomplicated surfaces. It’s a uniform look reflected off the simple mask your absolver starts with. You’re Nobody, going Nowhere. Walking through the ruins of a riverside village which serves as one of the game’s first areas, it has a kind of storybook feel. It’s the kind of scenery you might expect to see watercolored on large white pages. 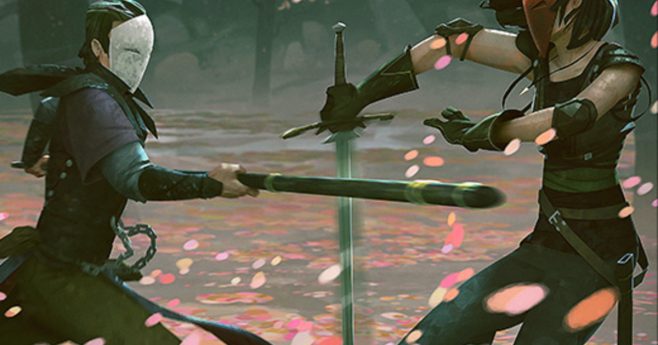 The streets of the nameless harbor are silent, like much of Absolver’s world. The world has fallen into disrepair. There’s not much to learn of the ordinary people who once lived there, other than the game flagging up the names of various quarters. It’s housing for outcasts. The harbor area isn’t extensive by any means, streets loop back into town squares and choke points. Dead ends hold treasures to be looted. It leads naturally into abandoned temples and cliff-side parapets. Enough to get lost in for a while.

What surprised me was how willing the game was to leave me alone. Enemies can be skirted and bypassed. Chances are other players will distract them anyway, which leaves me with plenty of opportunities for idleness. The other players, too, are a rather inoffensive bunch. There’s no voice chat or communication outside some set emotes and vicious uppercuts which don’t tend to trade in ambiguity.

The systems are reminiscent of those made popular through games like Dark Souls. Other players can be challenged to duels and, in my experience, only a few have attacked me without provocation. Most look to cooperate and the only noise that tends to disturb my lonely tours are the hurried footsteps of other absolvers trotting down adjacent streets.

Most look to cooperate and the only noise that tends to disturb my lonely tours are the hurried footsteps of other absolvers trotting down adjacent streets.

I think at the heart of it, I’m looking for a reflective space. It’s the same thing that attracts me to games like Elite: Dangerous wherein I can point my spacecraft at the void and just go. It’s what had me playing last month’s gentle game, Burly Men At Sea. Playing Absolver reminds me of the ever so brief time in spent in Palermo one summer, where it seemed like at any point you could leave the bustle of the main boulevards and wander sun-drenched side streets which hid their own small treasures. Quiet piazzas and fascinating architectural flourishes, protected from the frenzy out on the main streets.

Unfortunately, I don’t think Absolver can keep catering to my frankly unfair needs. As I said, I wasn’t very far into the game. I’ve defeated the first proper boss and the next area seems to be ready to put more concentrated groups of enemies within a more linear path. I suppose every good daydream has to end at some point. I’m glad I get the opportunities to carve out these small personal spaces. I have a flatmate. I work in a busy office in Scotland’s largest city. As previously mentioned, walking often results in me being cold and tired while having to dodge the hazards of the city. I don’t get many opportunities to be alone and so I think isolation has become one of my indulgences. I’ll get it wherever I can these days.