Walk around Alexandria for long enough in Ubisoft’s Assassin’s Creed: Origins and you’ll pick up on something strange: the statues are completely nude. I don’t mean the figures, though — I mean the marble.

The lily-white statues in the Greek city of Alexandria stand in sharp contrast to the Egyptian ones around the nation’s former capital of Memphis. The former statues are colorless. The latter ones are covered with paint.

While people have known for hundreds of years that Greek statues were brightly painted, there’s always been a strong resistance to acknowledging that sculptors like Praxiteles ever experimented with color. Noting the visible traces of paint on several statues excavated from Athens in the early nineteenth century, the sculpture curator of the Albertinum, Georg Treu, even went so far as to publish an article under the title Should We Paint Our Statues? The answer to his question was a quiet “no.” Most curators of Greek sculpture ignored him — and his evidence.

Traces of color used to be scrupulously removed from newly discovered Greek statues, but their Egyptian equivalents were  spruced up. These approaches were both seen as restorative. While this double standard has been disappearing, the public remains unaware that both Greek and Egyptian sculptors painted their products. Videogame developers are under the same illusion. In other words, they put paint on Egyptian statues, but keep Greek ones white. Assassin’s Creed: Origins provides a pretty good example of this. 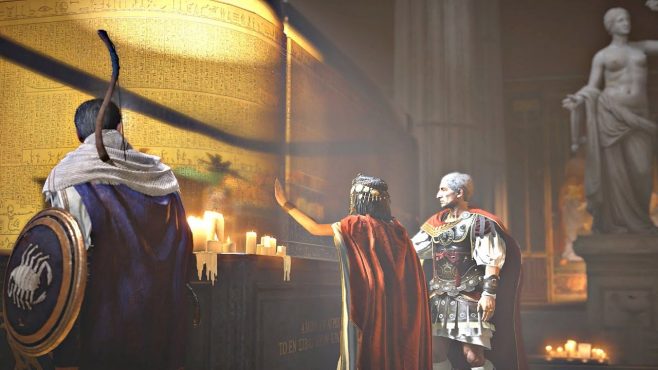 The site of Alexander the Great’s mausoleum isn’t known today, but you can parkour all over a pretty slick rendition of the building in Assassin’s Creed: Origins. Take a few minutes to appreciate its carefully crafted interior and you’ll notice the numerous depictions of Alexander. Supposing that you take the main entry into the building’s burial chamber, the most impressive one of these will even be staring you right in the face. The statue literally towers over Alexander’s glowing sarcophagus. The most remarkable feature of this rather impressive piece would have to be its complete lack of color, though. You can scrutinize the statue for as long as you like, but you won’t find a single trace of paint on the surface of its pristine marble.

There’s always been a certain sense of wonder surrounding the Great Sphinx. Featured prominently in Assassin’s Creed: Origins, the monument is one of the game’s primary points of interest. While centuries of wind-blown sand have slowly stripped any trace of color from its stone surface, the Sphinx was painted in the past. With its black eyes and blue beard, the rendition of this monument which you’ll come across in Assassin’s Creed: Origins reflects this ancient reality. The red and white crown on the standing figure between its two paws even helps to bring out the statue’s black and blue features.

Why is there such a stark difference in Assassin’s Creed: Origins between the lily-white statues of Alexander and the brightly painted Sphinx? The answer is mainly historical.

Seen as being at the heart of Western society, people in the nineteenth century considered ancient Greece to be something of a role model. They idealized the apparent simplicity of its aesthetic traditions. Turning up in museums like the Albertinum, statues by sculptors like Praxiteles came to exemplify the cultural values of their latest admirers. Nobody wanted to hear that such understated works were painted in gaudy shades of red, yellow, green and blue. Egyptian statues, though? Buying into orientalist ideas about Eastern extravagance, hardly anyone had a problem with Egyptian polychromy.

The chromatic difference between the statues of Alexander and the Sphinx in Assassin’s Creed: Origins can only be a product of this orientalist ideology. While most game developers probably aren’t even aware that Greek and Egyptian sculptors shared the practice of painting statues, they still play their part in perpetuating the myth of an opposition between Western restraint and Eastern extravagance through adherence to the established norms of historical representation. Ubisoft did this with Assassin’s Creed: Origins. What about Assassin’s Creed: Odyssey, though? 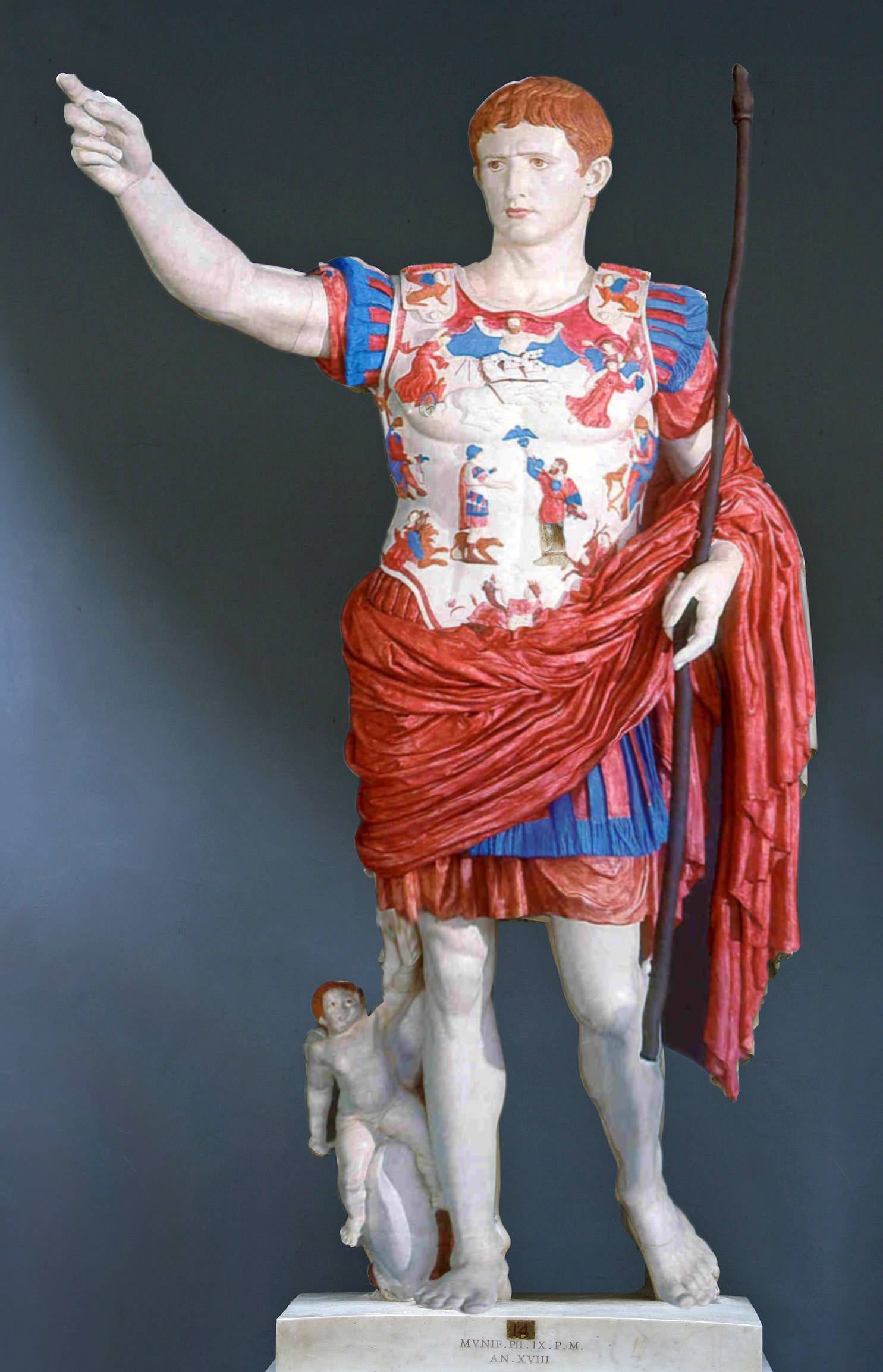 Assassin’s Creed: Odyssey takes a different approach to polychromy. Take a stroll through the game’s rendition of Athens and you’ll come across more than a few gaudy statues. The ones on the Pnyx are a perfect example.

With its dramatic views onto the surrounding city, the hill known as the Pnyx provides one of Assassin’s Creed: Odyssey’s primary points of interest. Furnished with four towering statues, you’ll be in for something of a surprise when you make it to the top, though. In sharp contrast to the ones of Alexander in Assassin’s Creed: Origins, these are clearly supposed to be painted. There’s hardly a square inch of pristine marble to be found anywhere on them. Scrutinize the statutes for as long as you like. They’re worthy of consideration.

Why does it matter that Assassin’s Creed: Odyssey has taken this different approach to Greek polychromy? Turning its back on the orientalist ideas which crept into Assassin’s Creed: Origins, Ubisoft has chosen to present the public with a more nuanced perspective on the past. Blurring the boundaries between the cultural traditions of Greece and Egypt, this perspective helps to put the myth of an opposition between Western restraint and Eastern extravagance to rest. As an archaeologist with a background in both Classics and Egyptology, my only wish is that Ubisoft had been a bit bolder. The painted statues like the ones on the Pnyx are somewhat exceptional. Ubisoft has made a powerful gesture with Assassin’s Creed: Odyssey, though. I hope that other game developers will pick up the baton.

A Bus Full of Dogs in El Salvador