When the CEO of Hasbro mentions Dungeons & Dragons at all, it’s big news. When he mentions an esport to go along with it, it’s really big news. But did he actually mean “esport” or was he using the phrase as shorthand for something else?

Yet another sign that D&D is doing well is the frequency it is mentioned on investor calls. For several years, Magic: The Gathering was the only mention of gaming from Wizards of the Coast, a subsidiary of Hasbro. That changed in the past few years, with Hasbro CEO Brian Goldner bringing D&D up frequently.

In addition to D&D’s record sales, Hasbro has noted the game’s presence on Twitch. D&D’s growth was mentioned three times on Hasbro’s recent earnings call. It was a question from Stephanie Wissink, a toy analyst at Jefferies, regarding the videogame Magic: The Gathering Arena that elicited a detailed response from Goldner on an investor call. It gives more insight into his thinking about esports.

…we’ll launch Magic Arena this year, but then we’ll add to that a suite of other games around our Magic: The Gathering business as well.

“Well, we are certainly investing and continue to iterate for Arena. It’s very exciting to see as we are bringing on more capability to the number of people signing up in the closed beta and that our intention is we’ll launch Magic Arena this year, but then we’ll add to that a suite of other games around our Magic: The Gathering business as well.” Goldner referenced D&D and Magic: The Gathering in the same context, citing that D&D was “also up in the quarter” and continued “to see new gamers come on board at double-digit levels.”

To Goldner, building a strong digital base that feeds into face-to-face gaming is a critical part of the company’s strategy, including card and role-playing games. He explained to Wissink that the digital space was an opportunity to double the growth of traditionally analog game brands, “…and it’s going to come from the suite of games that Chris and his team are leading…”

Goldner was referencing Chris Cocks, the new CEO of Wizards of the Coast. Cocks’ organization announcement made a point of emphasizing that he is an avid player of both Magic: The Gathering and D&D brands. This is significant because the company’s two biggest brands did not always get along.

Former brand manager of D&D, Ryan Dancey, explained on Reddit that “the brand team for Magic didn’t want to dilute the very honed brand positioning for Magic as a competitive brand, and the brand team for D&D didn’t want to try and make some kind of competitive game extension for D&D.” Those concerns have clearly been put to rest, as Wizards of the Coast continues to produce Magic: The Gathering/D&D crossovers, a city in the Magic: The Gathering card game that has been fleshed-out for tabletop role-playing. “With the huge surge in popularity of D&D and Magic‘s commitment to bring the lore and storytelling to life, the timing seemed perfect,” said Nathan Stewart, director of D&D.

Cocks’ influence is being felt in other ways too. When Cocks came on board, he mentioned his plans to reimagine Wizards of the Coast’s games in the digital space. Cocks led the creation of the Digital Games Studio, a group of experienced Wizards game designers and industry talent from Activision, BioWare, Cryptic Studios, Dire Wolf Digital, Valve Corporation, Warner Bros. Interactive Entertainment and more. Perhaps most telling was his hiring of David Schwartz, an industry veteran with 25 years of experience leading videogame projects. “He is building a publishing team to explore partnerships and collaborations that will bring Magic and D&D to unexpected settings, genres, and platforms,” said Goldner.

All this adds up to a digital strategy for D&D that builds on the success of Magic: The Gathering.

As the toy industry takes a hit due to Toys R’ Us’ bankruptcy, Hasbro’s game strategy is increasingly focusing on two pillars: social brands that rely on face-to-face interactions and the growth of digital that mimics the face-to-face experience. D&D is doing both of these very well, which is likely why Goldner brought it up again with TV host Jim Cramer on CNBC’s finance TV program, Mad Money.

…over time we [sic] build this to be more of an esport property; it’s a very immersive game and it’s perfect and right for global esports competition.

This piqued Cramer’s interest, who wanted to know how Magic: The Gathering Arena reached a million players so quickly – which could potentially translate into millions of customers “to sell into.” Goldner’s response was that the digital world was influencing traditionally analog players, who “are watching us on esports.” With about a million viewers per month watching both Magic: The Gathering and D&D on Twitch, Goldner pointed out that “over time we [sic] build this to be more of an esport property; it’s a very immersive game and it’s perfect and right for global esports competition.”

There are a wide variety of esports types, with multi-player online battle arenas, or MOBAs, most prominently featured – Defense of the Ancients and League of Legends are two standouts. This may explain Goldner’s transition from talking about Magic: The Gathering Arena to talking about esports. But did Goldner mean a separate videogame emphasizing combat elements or an actual tournament version of D&D? For an answer to that, we can look to Magic: The Gathering Arena. 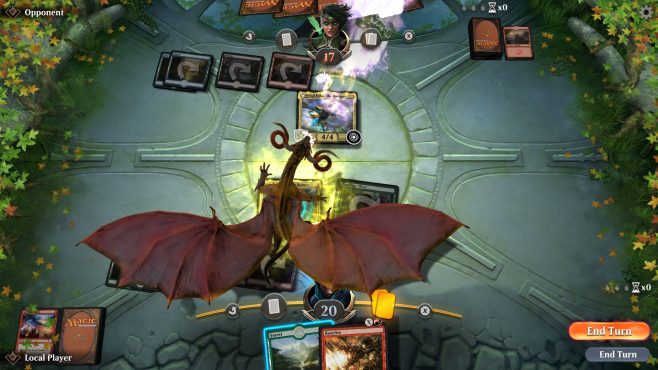 Magic: The Gathering Arena’s description claims that it’s “real Magic for the modern era. Play, collect and build online just like you would at your kitchen table or local game store.”

There are four highlights to Magic: The Gathering Arena: The digital game abides by Magic’s rule set, every card is rendered just like the analog format, card sets are released digitally simultaneous with the tabletop game and around 1,000 new cards are added each year. It isn’t a MOBA, but there is a precedent for a card game played digitally as an esport in Hearthstone, by Blizzard Entertainment, which last year had a $1 million prize pool.

So, what did Goldner really mean when he mentioned esports and D&D? A spokesperson for Hasbro later clarified that “while the strategy for building digital gaming capabilities for Dungeons & Dragons remains intact, the game has not yet been classified by the company as an esport because of its limited competitive scope.”

And yet D&D has had a long history of competition harking all the way back to 1977 with the D&D Championship Series. David Hartlage (DM David) likens participating in the Championship to a sport. “I’m no D&D-playing star, but unlike those sports teams where I found humiliation, I can join a D&D party and contribute. At last, I get a sense of what the jocks always blathered about. Sitting on a team and contributing to success to can be glorious.”

Competition isn’t just a part of D&D, it was built on it. D&D co-creator Gary Gygax specifically wrote the legendary Advanced Dungeons & Dragons adventure Tomb of Horrors for tournament play before it was adapted to general publication – which may well explain why the adventure is so deadly.

Tomb of Horrors’ influence is felt to this day. Ready Player One, the best-selling novel by Ernest Cline, prominently featured the Tomb of Horrors as the gantlet to retrieve the first key in an immersive videogame competition watched by millions – in other words, an esport.

While Goldner may not have meant an esport for D&D just yet, it has all the elements that would make it successful: competitive play, a digital audience, and a popular brand. Can a D&D esport be far behind?

Mike “Talien” Tresca is a freelance game columnist, author, and communicator. You can follow him at Patreon.