Doctor Star and the Kingdom of Lost Tomorrows #2 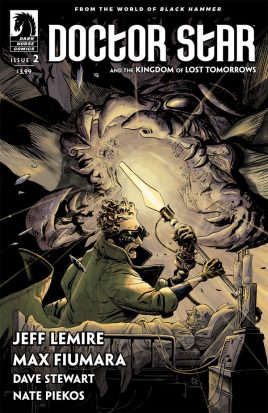 Time travel? Check. Superheroes fighting Hitler? You got it. Existential debates about paths not taken. Plenty of that. Did I mention cursing superheroes? What’s not to like about writer Jeff Lemire’s Black Hammer and its ever-expanding universe? Doctor Star and the Kingdom of Lost Tomorrows is good for what ails me.

Issue #2 of Doctor Star picks up where issue #1 left off, with Doctor James Robinson visiting his son Charlie, who’s dying of cancer and in Hospice care. Like issue #1, time jumps back and forth between today and the 1940s/1950s yesterday of superhero Doctor Star. While we get to see old-timey Doctor Robinson-as-Star fighting supervillains, we see that contemporary Doctor Robinson’s life is since has been anything but super. Indignity of indignities, he’s chased out of his son’s hospital room by his daughter-in-law.

Doctor Star is a generally melancholy book, but it’s never maudlin. Today, Doctor Robinson is full of guilt over past life choices. In the past, Doctor Robinson chose life as Doctor Star. He isn’t a bad man, but his genius gave birth to hubris, making him oblivious to those he hurt and ignored – his family. Issue #2 reveals the real cause of Doctor Robinson’s sadness: time lost from his family. Apparently, Doc failed to calculate the time difference in a black hole while fighting a super dragon and was AWOL from Earth not for hours, but for 18 years.

If you’re reading Doctor Star, you’re probably familiar with Lemire’s Black Hammer, which is currently on hiatus, and Doctor Star is filling the hole in our lives. I’m certainly happy to have this book, after snappy companion Sherlock Frankenstein and the Legion of Evil wrapped up. Expect the same depth of character and multiple levels of moral quandaries from Doctor Star as you would get in any Lemire story.

Artist Max Fiumara uses a mix of realistic and cartoon-like physical exaggeration. He uses splash pages judiciously and his panels flow effortlessly. Dave Stewart is on colors, and he shows more than the muted matted palette I know him best for from the Mignola-verse. Stewart’s versatility with light and shadows really gives Fiumara’s art some depth.

So where should we expect to go next? More dragons? Battles against the Legion of Evil? If the advertised Green Lantern-esque cover of issue #3 is any indication, we’re heading back to deep space. Enjoy the ride!

Xerxes: The Fall Of The House Of Darius And The Rise Of Alexander #1

It looks like the prodigal son is making his return. No, I’m not referring to Militiades, Themistokles or Alexander himself. It’s Frank Miller, comic book weirdo extraordinaire. I’ve written extensively about Mr. Miller during my run 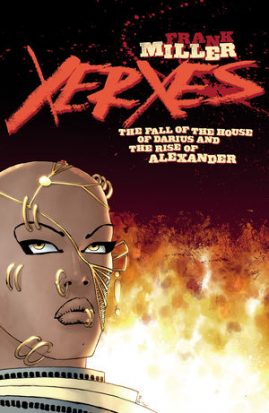 here at Unwinnable, about how he was a comic book idol of mine growing up. I still stand by his creative output from the 80’s through the mid 90’s, but my stance on his work in this new millennium is way shakier. After 9/11 Miller has been vocal about his political beliefs, and he doesn’t seem to be a fan of the Middle East or the people therein.  While his righty politics and weird views on women and LGBTQ characters have always bobbed up and down in some of his earlier work it simply juts out like an a volcanic mountain in his output from the last 15 years. This includes 300, the famous graphic novel by him about naked male warriors that was made into a Zack Snyder-launching movie about abs and xenophobia, and another pseudo-sequel movie that I can attest is fun to watch while running on a treadmill, mainly because of the awesomeness of star Eva Green. Anyways here’s another chapter in Miller’s kind of historical account of ancient Greece, and the Battle of Marathon. It’s pretty decent, but still problematic.

The first issue of Xerxes throws us right into the action, as we learn that the Greek environment is literally rejecting the invading Persians. Sea god Poseidon and wind god Belarus are referenced as the unseen influential factors, but jagged rocks and spiky underbrush are also at play. Over the course of one issue the Persian army goes from cartoonish caricatures to respected enemy, which is reflected in art that ranges from unflattering and offensive to defined and reverential. I’d like to hope that this was an intentional POV choice from Frank Miller to portray how the Persians are viewed by the Athenians initially as grotesque barbarians, and how they are perceived more respectfully after a major skirmish where they hold their own, mostly. As modern comic book history has taught us Miller always seems to portray the Persians as inferior to the Greeks, their appearance and actions alien and deviant. Their leader Xerxes (unseen is this issue) is usually portrayed as a tall thin heavily pierced effeminate and mostly naked man that the reader is constantly reminded is also an evil man. Since they’re still referred to as barbarians by the end of the issue so I don’t think the portrayal of the Persians will improve over the course of this series.

I’d like to think Frank Miller has mellowed over the years, wishing to tell a story based on history tastefully reinterpreted through his own creative filter that doesn’t bring his personal politics to the fore.  If there is one sign of growth it is that he’s respectful towards the Athenian soldiers in this book, way more than he was in 300 where a character refers to them (in much harsher words) as a bunch of pedophiles and homosexuals. He still manages to get in his barbs against Militiades though. Militiades was the great Athenian general who was integral to the victory at Marathon, and in this book he is called a fop by one the Captains and is portrayed as very clean shaven and effeminate with long flowing blonde hair and a slender appearance, despite ancient artistic portrayals of him not looking like that at all. We’ll see where this portrayal goes. If you’re wondering Miller still thinks very highly of the Spartans, having a character mention that they can’t make it to this battle due to a fertility festival.

This feels weird to type but I actually enjoyed portions of this issue, mainly because Miller can still draw an engaging action sequence. I wasn’t a fan of the cartoony representation of the Persian army in the beginning and the occasional 300 greatest hits and remix vibes throughout the issue, but I still enjoy a good yarn based on ancient Greek history. Miller’s art hasn’t been this on point since 300, which may also be because colorist Alex Sinclair did some wonderful work in this issue, from the background flourishes in the sky and landscape to the enhancement of the Athenian shields and details of the robes worn by the Persians. Still, this vendetta Miller has against the Middle East is troublesome, and I’m having trouble right now separating the art from the artist. Due to the kinetic action-packed artwork I’ll give it 2 out of five Athenian speedos, although something tells me that this whole venture may reveal itself to be 300 watered down by Poseidon.