Playing as the protagonist of Assassin’s Creed Origins, Bayek of Siwa, I spend most of the game liberally stabbing bad guys on a quest for vengeance in Ptolemaic Egypt. A few of these killings leave an especially bad taste in my mouth, however, and force me to question who exactly the game deems expendable – a footnote in the grand history it is establishing – and what that says about its moral universe.

One example is a mid-tier target on Bayek’s long, long list: the Hyena, or Khaliset. Khaliset is only perfunctorily a part of the Order of the Ancients, the group Bayek blames for the death of his son, Khemu. You find her within in the depths of a pyramid, sacrificing kidnapped villagers for an arcane ritual to resurrect her own dead child, Eshe. While her methods reflect cliché villainous behavior, like Bayek, she’s only acting out of sorrow and desperation. Rather than noticing the obvious similarities between their motivations, Bayek instead sees someone who has to die. Hers is “a just end,” he declares with cold confidence. A few button presses and the inevitable hand of interactive punishment descends and smothers her life, along with any possibility of forgiveness and redemption. As she is dragged into the void, she screams, hopelessly, one last time for her lost child.

A yet more tragic example takes place in the city of Krokodilopolis, where I meet the gladiator Kensa, who, having grown up with Bayek in Siwa, appears quite fond of him (while he remains suspicious and aloof). Kensa was once a slave to the Romans, escaping to find her freedom amidst the blood and violence of the gladiatorial arena. Together, we triumphantly fight our way through the arena’s ranks, finally toppling the former champions in a sports film-like finish. Subsequently, Kensa is revealed to be working for The Crocodile, Bayek’s assassination target in the area. Playing as Bayek, I thoughtlessly murder her, immediately after dispatching the Crocodile. I find out later I could have spared her, left her alone with the death and the mess, but it’s far too easy to hit one more button and murder everyone in sight. She’s in the way of the pathos-drenched cutscene and thus must die – just for fighting for the opposing team in her bid for liberation. 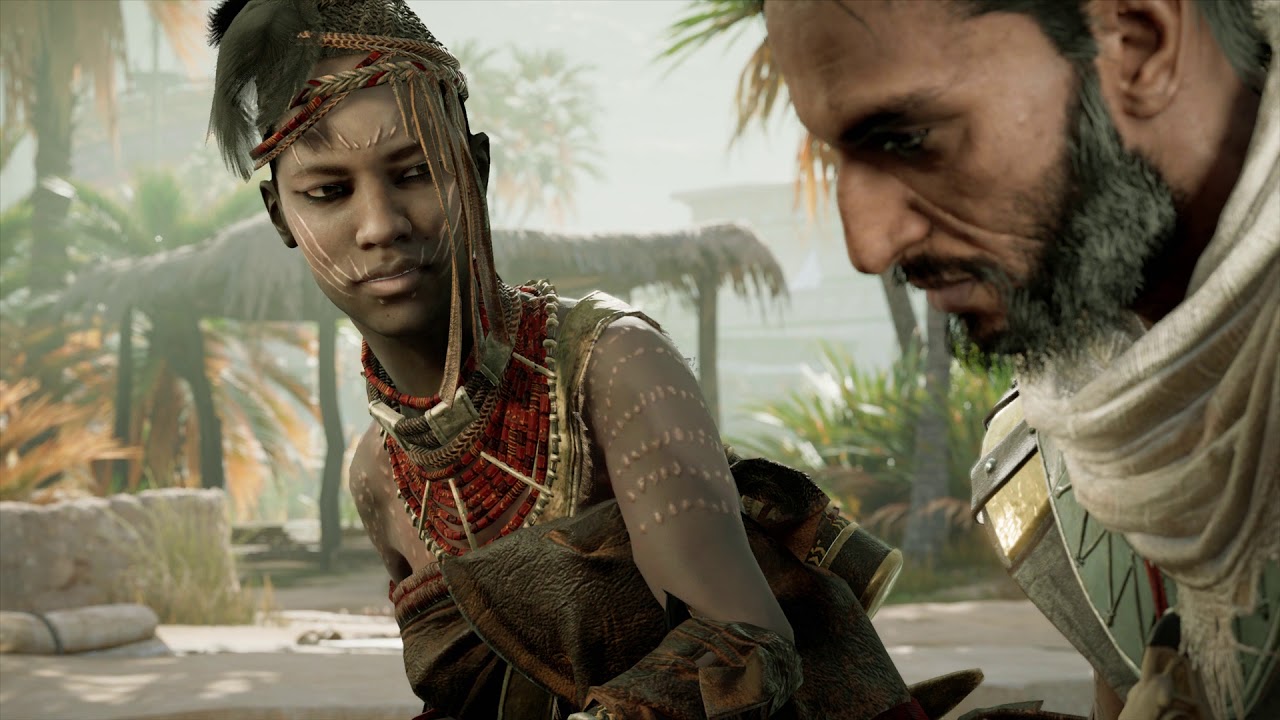 Both of these characters are marginalized women. Their dark skin, Kensa’s ornamental face scarring and Khaliset’s kinky hair and face paint, set them apart from the Greek and Roman characters who you find living in splendor in the cities bounding the Mediterranean, like Cyrene and Alexandria. Both women are cursed with a bad lot in life and take action to pull themselves up and take agency over their future. But both are on the wrong side of Bayek’s arbitrary moral compass. They cannot be part of his gang, his future assassin’s creed, and instead are left to crumble into dust along with the rest of those pilloried as villains in the game’s telling of that period in history.

When Kensa sees Bayek after he murders her boss, The Crocodile, she tells him, “Perhaps I was always meant to die at your hand.” This framing rests all moral responsibility on Bayek’s shoulders, painting him as a detached, disinterested actor, who (along with the player) gets to decide the fate of characters whose actions so closely resemble his. It’s all the more disingenuous when these characters are marginalized Egyptians, not the Roman and Greek gentry who make up a large part of Bayek’s “Hidden Ones” proto-assassin organization formed at the end of Origins.

The PlayStation game, Metal Gear Solid memorably features a boss-fight against the enemy Sniper Wolf, who similarly illustrates this narrative trope. A pitiful character, forced by circumstance into the role of soldier, she winds up being mercifully put down by a rueful Solid Snake. (Though she too exhibits villainous behavior, wounding Snake’s companion, Meryl, in order to draw him out). As she lies on the floor bleeding out, she whispers sultrily to Snake: “I wasn’t waiting to kill people. I was waiting to be killed . . . by a man like you,” topping it off with “you’re a hero.” The flawed female villain must seemingly always sacrifice herself for the satisfaction of the equally flawed male hero; guilty of similar crimes, but allowed to live on and make the same mistakes for many generations and franchise iterations to come. Metal Gear Solid came out two full decades ago. Videogames need to stop asking the player to put down the equivalent of an injured horse, or a rabid dog – especially when it’s an act of cruelly punching down in the interest of some abstract utopian future.

Kensa doesn’t have to die, but every mechanism at your disposal helps insure she does.

Being forced to kill a character that you don’t really want to; being forced to dispatch a life in the service of the narrative is a transparent attempt to add grit and pathos to what are probably lightweight stakes. Yet most games do their damnedest to make killing easy and natural, and thus undercut any potential moral conflicts the player might experience while carrying out their task. Kensa doesn’t have to die, but every mechanism at your disposal helps insure she does. Once that red mark appears over her avatar, once time slows and the soundtrack ramps up, sliding the blade in becomes easy, automatic. I’m only given a spare moment to consider what I’ve done before the game demands I select another mission, pilfer a new piece of armor, hunt for pelts or engage with any of the numerous activities vying for attention on the world map.

There’s nothing inherently wrong with games presenting the player with the means to do violence, but whom the violence happens to and who carries it out should always matter. These marginalized folk deserve the chance to make mistakes, to get on your bad side, to break a few laws and still live. Because the alternative is the sorry status quo of a game like Origins. Bayek snuffs out lights, one by one and, in the end, barely registers the weight of the resulting darkness: an amorphous new world of shaky autocratic rule, brinksmanship and near-constant political assassination. Meanwhile, a childhood friend who was only trying to figure out a way to succeed in a world set out to exploit her, a mother only making questionable choices out of grief for her lost child; both are now only memories which Bayek will likely fail to recall in the midst of his closing arguments about justice and brotherhood – mirroring the path many great, violent men have taken throughout history.