This story is a reprint from Unwinnable Monthly #97. If you like what you see, grab the magazine for less than ten dollars, or subscribe and get all future magazines for half price.

One night, way back in 1999, I got a phone call from a friend. He was playing a new game called Silent Hill and he was wondering if my girlfriend at the time and I would like to come over and watch. He wasn’t asking out of a desire to be social, but rather because the game was scaring the crap out of him and he didn’t want to be alone. We went over and, as the game wore out our nerves (with that siren and those creepy child ghosts, it was scary!), we’d pass the controller back and forth. We went back the next night and every night after, until we were finished the game.

If there is one thing I miss about videogames these days, it’s playing them with friends – not online, but together on the couch. Yet, while there were the occasional co-op games like X-Men Legends and Castle Crashers, most of my couch co-op involved single player narrative games and a passed controller – one person playing and everyone else watching. It was always fun, but actual co-op, with everyone playing, was a rare treat.

With the advent of online multiplayer and the explosion of giant competitive games like League of Legends and PlayerUnknown’s Battlegrounds, you’d think that co-op, already a rarity, would be falling to the wayside. But that isn’t the case. There’s a small renaissance of co-op games of many different flavors finding release in the last five years. Rite of Ilk is set to enter the mix with its unique design sense and play constraints.

Rite of Ilk was developed by Turtleneck Studios, formed by university friends who came together after going separate ways for several years in the game industry. Appropriately for a group of reunited friends, the game is a cooperative exploration-adventure played entirely by two players (both local and online, which is a big plus).

We spoke to Alanay Cekic, the game’s creative director, about the challenges and joys of developing a cooperative exploration of . . . cooperation.

These days, it seems like co-op is usually an add-on of a larger game and also limits your potential audience. What made you want to develop a co-op game?

We’re building a narrative-driven, two-player-only co-op. It’s an immersive experience which is unusual within the exploration genre itself.

People are scared of what they don’t know and by developing a co-op only game, in a sense, we are delving into a wide and deep unknown. Just because it’s rare or unusual doesn’t mean it can’t be fruitful. There are tons of games out there that are co-op only, most of those games are party games or small in size – some successful and some not. We don’t think we’re redefining the co-op genre by being different, but rather we are adding to it with what we feel is a unique disposition and a next step for co-op play.

We started this adventure by simply grabbing something we wish for ourselves: an experience we love that we could play and share with a friend or partner. There are many games I would love to play with my girlfriend, but can’t. Often the games that do have co-op play treat it as an add-on or don’t offer the immersion we would like. In our game it’s not an add-on, couples who play games and even friends, siblings or grandparents with their grandchildren can bask themselves entirely in the Rite of Ilk universe.

It’s an experience that doesn’t simply allow for co-op play, but embraces it as a backbone of gaming. And if you can’t find someone to play with, there will also be online play available.

The rope binding the two characters together is an obvious metaphor for the power of teamwork. I was wondering what other messages you might be trying to impart through a game about constraint and connection?

Constraint can be either a positive or a negative experience, a source of security as well as frustration. With the rope’s constraint you are forced to be together with another person. Although teamwork is definitely the defining factor, it’s about more than just working together. We factor in acceptance and individuality. The character you play with, as well as your teammate – the other player – will be different from you. Your teammate’s play style, personality, physical appearance, gender and nationality, just to name a few, can have many differences and/or similarities and it is up to you two to cooperate in order to find solutions and overcome challenges within the game.

It seems like tying the players together would create double the problems in terms of mechanics and puzzle balance. Is this the case? And, if so, how have you overcome the challenge?

It’s challenging to consider two people at the same time, exactly because they are two different people. There are moments where you want to make a puzzle interesting for both players despite their roles in the puzzle being different. To give you an example: one player might have to pull levers and control machines to create a path, while the other player will have to platform and traverse himself over that created path. They are both doing different things within the same challenge, but both players need to find their role enjoyable. Now . . . how do you go about that? We don’t have a sure key to victory in terms of creating puzzles or obstructions, it comes down to experience, a lot of trial and error and figuring out what works and what doesn’t. It is earnest hard work! But in a way, it’s also double the fun.

The world you’ve created is sumptuous. What inspired your aesthetic choices and what are you trying to convey through the portrayal of Mokh and Tarh’s culture?

Thank you! We’re keen on innovation, experimentation and aspire to create a world that draws you in and is worth discovering. We decided to go with a fantasy setting and an elaborate shape language very early on in our pre-development cycle. It needed to feel earthly enough to be recognizable, but unique enough to represent a vastly different planet.

With Mokh and Tarh’s culture, we are using a lot of real life references to make it tangible for development. To us, they’re tribesmen with little knowledge of the outside world who are sent out on a journey and stumble onto these grandiose ruins and mysteries of their ancestors.

When I say those names together, it sounds like something I should know, like it is a reference to something. Is it?

This is an interesting question that I didn’t see coming! The answer is yes, it is a reference to something. We are using a lot of different cultures and symbolisms from real life to inspire Rite of Ilk’s meanings and definitions and. quite frankly, a lot of stuff in the Rite of Ilk universe has subtle or straightforward stories to it.

In the same vein, we chose the names Mokh and Tarh for our heroes.

Although our game isn’t influenced that much by Arabia, the title “mukhtar” (spelled slightly different than Mokh + Tarh) holds a very significant definition. It means “chosen” in Arabic and mukhtars are usually selected by some consensual or participatory method in their village. The meaning stands somewhat true because Mokh and Tarh are chosen by their tribe to undergo a very important Rite. We feel it’s a nice touch to their names. 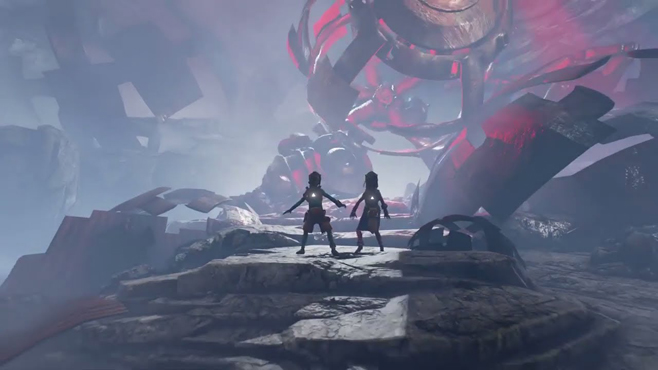 The trailer is narrated by a voice using what sounds like a Native American language and there seems to be an elaborate symbolic language on display in the environments. How did you approach language in Rite of Ilk and what role does it play in the game?

We really want to dip the game in an unusual flavor. Part of the game’s uniqueness drips from the story and our approach to it. The characters talk a language that we have created ourselves, which is heavily inspired by a variety of African languages, such as, Swahili, Sesotho, Ndebele, Xitsonga and IsiXhosa. There are also Arabic and Native American influences. The cultures behind these languages are significant to our visual approach for Mokh, Tarh and the world. We pinned down on a self-made language because they’re not inhabiting Earth.

Rather than telling a story entirely with subtitles or strange, unidentifiable made-up lettering on walls, we wanted to tie in a visual symbolism to make certain elements clear to players without having to rely on text. Although we’ll also have text, the symbolic language in our game is kind of like images from a picture book or comic and a means to tell stories non-textually.

The story of Rite of Ilk – two children sent to redeem an entire culture in the eyes of the gods – is a heavy one. What do you hope players take away from it?

Although their Ilk, ancestors, and the Gods all paved out Mokh and Tarh’s road for them to take, the real journey is about finding yourself and your own path, together with someone else. When it really comes down to it, albeit likely a lot less dramatic, it’s not all that different from your journey to maturity in the real world. 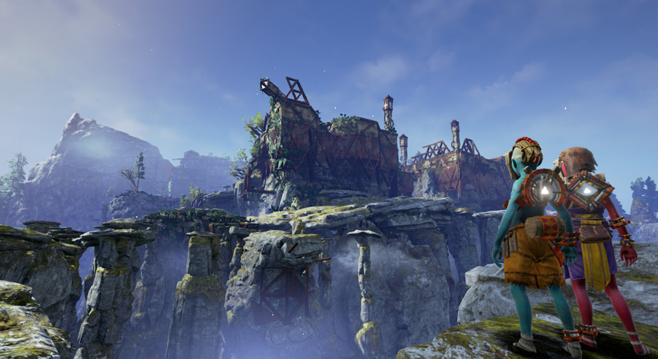 Unreal Engine 4 is powerful and gives us plenty of options to work with. If it’s about creating shaders or working with Blueprints, to a certain extent, it’s all doable by designers and artists. Prototyping is done quickly and there is a lot of optimization that is done by the engine itself under the hood. It gives us enough freedom without making us feel helpless. We like to create high quality games and Unreal Engine provides you with the ability to create high quality content.

It allowed us to pay for our trip to GDC in San Francisco and offered us a bit of financial leeway. It’s expensive to develop games, which rings truer the bigger your team is. We’re a crew of 6+ people and the financial support from a grant clearly doesn’t pay for all of our expenses, but sure as hell bites off parts.

At that point in time, we wouldn’t have been able to attend GDC without the Dev Grant. We are very grateful and feel that the grant has not only helped us financially, but it also instilled us with confidence.

The Virtue of Bean Farming