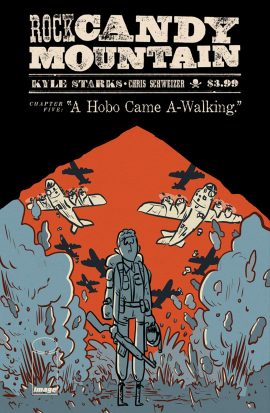 I haven’t had the opportunity to read too many comics this past year (for various personal and professional reasons). That said, there is one comic on the stands that reminds me of the joy comics can bring – Kyle Starks’ Rock Candy Mountain. I love this gosh dang series!

Rock Candy Mountain is the story of Jackson, a hobo who made a deal with the literal Devil so that no one man could beat him in a fight. Once the deal was in place, he set on a path to find the titular mythical hobo heaven. At least, that’s the story until Starks reveals why Jackson made his damning deal.

Issues 1-4 focused on post World War II Jackson and his quest to ride the rails to paradise. He made an enemy of Boss Flimbo, squared off against the Devil and got himself caught in a big ol’ prison fight. Starks takes a break from the present day and tells Jackson’s origin in issue 5. Don’t worry, it’s not a breather – it’s a batshit crazy hoot!

The issue begins with a young Jackson being drafted into the World War II. He’s married with a newborn baby. His wife, Holly, begs him not to go because he can’t fight worth a good gosh darn, but this was WWII and Jackson had to go. And so Jackson goes to the crossroads at midnight to make a deal with the Brimstone stinking Devil. The story moves to the war where Jackson makes use of his newfound gifts. He takes down an entire army barracks, a bunker full of Nazis and we learn a big secret about the stick he’s been carrying around (hint, it’s no ordinary stick).

Starks’ stylized cartooning, sharp humor and smooth storytelling pull the reader in issue by issue but number 5 adds another element – an impending sense of dread. Throughout Jackson’s origin, he becomes a hero to the Allies but one can’t help but feel the other proverbial shoe’s weight. It comes closer to dropping with every page turn and when it does, it’s heartbreaking.

Damn it, Kyle Starks, why are you so good?!

Rock Candy Mountain # 5 kicks off the next part of Jackson’s story. If you haven’t already started reading this comic, go get yourself the first trade paperback collection (4 issues for 10 bucks) and # 5 and binge some sweet, sweet chin music!