If you’re thinking about diving into Pyre, the new game from Bastion and Transistor developer Supergiant Games, the question you need to ask yourself isn’t what you thought of either of those two games. It’s what you thought about blitzball. 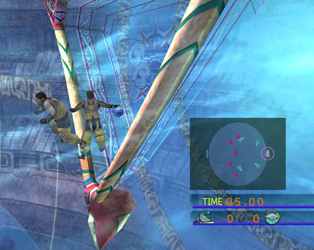 Blitzball was a roughly turn-based sport mini-game that, as a part of 2001’s Final Fantasy X, seemed like it was aiming for an underwater Olympic handball experience but played more like the worst game of freeze tag ever. If and when the player ever managed to gain control of the ball, blitzball tasked her with directing her particular triangle icon through a field of hostile triangle icons toward the icon for the opposing goal. When one of the hostile triangles came in contact with the player, the game zoomed in and a menu asked the player to either pass the ball or make a shot on the goal net. If the player’s stats were sufficiently better than the opposing character’s stats, then the pass or the shot would be successful and, if not, the opposing team would gain control of the ball and the player had to chase after their triangles with her own.

Final Fantasy X only forces the player to play blitzball once and there’s not much impact beyond a few small reward items as to whether the player wins or loses that match. The player character, Tidus, though, is ostensibly a professional blitzball player. The in-game story uses blitzball as a link between Tidus’s home world and the alternate reality to which he finds himself apparently displaced and retracing the steps of his lost father, who was also a blitzball star back home.

I hated Blitzball, but my roommate loved it and, while I made my way through Final Fantasy X’s main story, he played blitzball almost as if it were a game of its own. He worked his team up through the in-game league’s standings and finally won a component of one character’s legendary weapon in a tournament. I never would have explored the blitzball portion of the game on my own, but it gave me a way to share the game with another person and for us to feel like we were working on something together.

Which is all to say that if you, like my old roommate, think that a smoother, more active, more polished version of blitzball might have made a fine game of its own, then Pyre is the game for you. If, like me, you found the appeal of blitzball incomprehensible, then your reaction is likely to be more mixed.

While Supergiant describes Pyre in its press materials as a “party-based RPG,” it’s really more accurately described as a sport game buried under a visual novel. In Pyre, the player acts as a nameless “Reader,” who encounters a group of outcasts, The Nightwings, and directs them through a series of rituals that offer the opportunity for the outcasts to win release from their exile. This party travels through The Downside – a mystical purgatory world – and recruits new companions to assist them in their quest. Each of these companions offers a unique set of skills to be used in rituals and a backstory revealed in conversations with the Reader as they travel with the Nightwings. 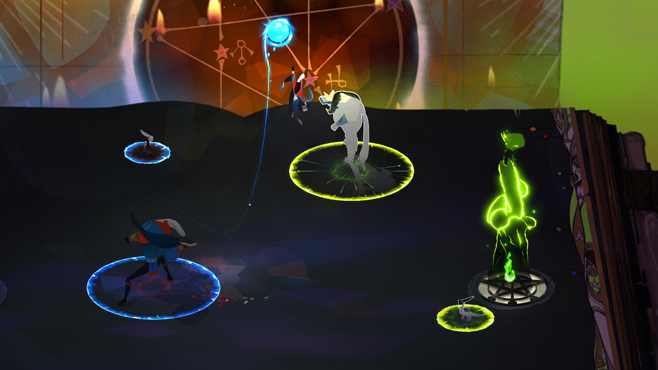 These travels and conversations, however, take place in an entirely point-and-click environment. The character models are beautiful but static, with lightly animated facial expressions. The world map isn’t really a coherent overworld so much as a stack of two-dimensional cards representing different regions of The Downside. After an initial circuit through the world, Prye opens up fast(er) travel and a ranking board tracking team standings as the Nightwings continue to play in hope of reaching another liberation rite and freeing another member of their team to return home.

There is an interesting tension built into Pyre as a result of the fact that each victory in a liberation rite – that is, each major step closer to finishing the game – costs the player a member of their team. Each significant victory, therefore, results in a substantial loss. I tend to imagine, however, that players who spend a significant time with Pyre will end up devoting more energy to the Versus Mode, challenging a local second player or the CPU directly, rather than trudging through a few extra story cards between matches.

If you build a blitzball game, then the game tends to rise or fall on the quality of the matches rather than how interesting the simulated chatter is on the bus between games. And if Pyre is blitzball, then it’s a better blitzball than in Final Fantasy X, but be aware that the world and story elements are more an attractive veneer than a functional frame, a pretense of portentousness, minor chords from a synthesized orchestra behind a cloud of chalk dust rising in the air.

On The Black Belly of the Tarantula