There are a lot of babies in Death Stranding. From Norman Reedus’s disappearing dirt baby in the first trailer, to Guillermo del Toro’s fetus in a jar, there’s a lot of the small folk to be found in Hideo Kojima’s much teased upcoming game.

But why this over-abundance of infants?

What this could mean is all open to exhaustive discussion. Babies, as it happens, are ripe metaphors for a lot of things and when viewed in conjunction with oil slick tears, naked Norman Reedus, Mads Mikkelsen’s tentacles of power, and the sloppy creations that flop wetly off of tanks, the babies may seem to be the least interesting bit. After all, we have babies. I guess. I mean I don’t have a baby, but I could if I tried really hard and asked Santa terribly nicely. Babies are banal, the normal thing that happens with two parents love each other very much. So it can be really easy to overlook them in favor of say, a pile of dead crabs.

But in the friend fiction that has become the latest installment of Kojima’s career, it’s not terribly hard to see the hints of one of fanfiction (and horrors) beloved tropes, that of male pregnancy (commonly abbreviated to mpreg). See there’s a lot of men in Death Stranding, and there’s certainly a decent amount of babies for what will probably end up being a stealth shooter. But what the game currently lacks is women, the carriers of fetuses, beings commonly referred to as mothers. In the absence of a traditional uterus, it seems likely that Kojima has dipped his fingers into the world of the uncanny and unnatural.

Mpreg is most commonly viewed as a horror trope, the monstrous found in the parasitism of a fetus. Tying what is frequently identified as a highly gendered act (pregnancy) and then mapping it to the male body has been fodder for horror for years — see the Chestburster in Alien. It’s not simply that women are not featured in the trailer. After Quiet’s photosynthetic nudity, it’s not even a little surprising that Kojima would craft a universe where women don’t feature prominently at all. Kojima has made a career off of the queerbait-y friendships of men. It’s the way that the men are featured in the Death Stranding trailer that sets my spidey-sense a tingling. The figures in Death Stranding are frequently attached to each other in umbilical like connections: Norman Reedus and his disappearing baby and gut scars, Guillermo and his fetal jar, Mads and his skeleton soldiers. 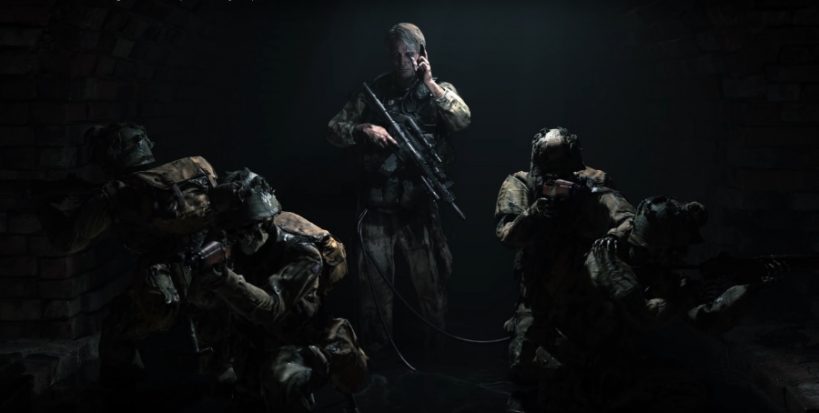 The first trailer, featuring a crying Norman Reedus holding a baby that then disappears like so much oil between his fingers, is ripe with the themes of male pregnancy and loss. Reedus is connected to his baby by an umbilical, the baby disappears leaving handprints down his thighs, and when he stands we’re treated to both the spectacle of his nudity as well as an incision across his stomach. I’m not saying that Norman Reedus had a dirt baby through c-section and then lost it, but the themes are painted in the whale-littered beaches of Kojima’s work. The newest trailer is similarly themed. Guillermo holds his fetal jar and connects to it, which seems to wake up the baby. A toy baby, which reacts the same way as Guillermo’s fetal baby, floats by in a long tunnel. Mads and his own umbilical cords, stretching through oil-rich water to the soldiers he commands. There’s a theme of interconnectedness that reeks of traditionally gendered acts, specifically carrying a child, that runs through both trailers.

Perhaps this is all reaching. After all, Death Stranding is so much in early production that speculation is an act in desperation. Information has been parceled out by Kojima productions with excited fervor, but it is just hype. But since the future is our oyster, and there’s no telling where it will go I hope for the non-horror trope of mpreg, the one that focuses on nurturing families and the trials and tribulations of pregnancy laid out on an all-male coupling. In this, the newest chapter of Hideo Kojima’s career, let’s see the quiet domestic life of Guillermo del Toro and Norman Reedus as they raise their charming little umbilical babies.