An Interview with Box Brown about Tetris: The Games People Play

I first came around to Box Brown’s work when a friend recommended Andre the Giant: Life and Legend to me. I was a wrestling fan as a kid and still have vivid memories of Andre in Wrestlemania III. Brown’s graphic novel tells Andre’s story with as much respect as David McCullough would John Adams or Harry Truman.

Tetris: The Games People Play is the story behind one of the most ubiquitous videogames to ever grace the medium. This is the story of Tetris creator Alexey Pajitnov and game maker/businessman Henk Rogers. It’s the story of an unlikely partnership and friendship that grew despite 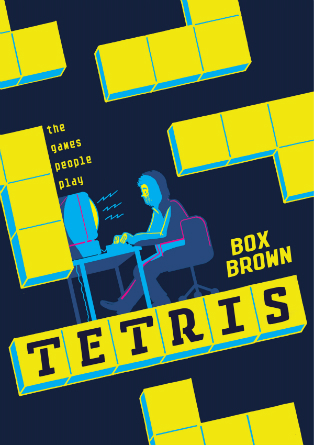 bureaucracy, crooked businessmen and the Cold War. It’s the story of a programmer’s labor of love and it’s journey from a Russian computer terminal to the Western World beyond the Iron Curtain. It’s a helluva comic!

Box Brown took the time to speak with us during New York Comic Con. As we headed to the press lounge, we made our way through the crowds on the floor to NYCC’s much quieter Press Lounge. There was a point where we had to step around people sitting on the ground like mismatched Tetris blocks.

“I had seen the Tetris documentary and when I started telling everybody around me about it, that’s when I start to realize I should make a comic about it,” he told me as we discussed the origins of his graphic novel. “Comics still have a stigma the same as pro wrestling and videogames even though it’s getting better every year. People don’t think of [comic creators] in the same way as the great painters or musicians of the world,” he said. “I am of the opinion that there’s no such thing as high or low art, so Tetris and the work of Andre the Giant represent masters of their craft.One of the themes of this book,” Mr. Brown said, “is to hammer the point home that this is one of the pieces of canon in this art form.”

Tetris’s strength as a work of art is one of the reasons that it survived its journey from a computer terminal to your iPhone. “The creation of Tetris took place in Communist Russia. When Alexy made it, he had no profit motive.”  Tetris was made for the most pure of reasons, Alexy just wanted to make a fun game. That’s it and that’s all Tetris had to be. “What we see with Tetris,” Brown tells me, “ is that it was made in this perfect environment and then we get to see what happens when capitalism digs its claws in.

“If Alexy is Luke Skywalker Henk Rogers is Han Solo. Henk was a game maker but he understood the business side of it. He was a champion for the game and became friends with Alexy.” In the comic,as the Soviet Union and scores of companies battle it out for the international rights to Tetris, Henk’s part in the narrative grows. “Henk helped Alexy move to America. Alexy was working as a scientist but his true calling in life was to create games. He didn’t get the money for Tetris but he got to realize his dream as a professional game maker.”

We spoke about games and how they intertwine with human culture. “Whenever I think about human desire and behavior, I start thinking about where they came from,” he said. “You think of games or gaming, especially videogames,  as this modern thing but gaming has been a part of human civilization since we were able to communicate and I wanted to put Tetris in that historical context.” Brown literally showcases this in the book as he explains how the human brain experiences Tetris. Like I said, it’s a helluva comic!

Box Brown’s love and respect for Alexey Pajitnov and his creation is clear on every page of  Tetris: The Games People Play. Brown tells a story that by all conventional wisdom should not have happened, but it did. His book isn’t just about history, it’s about an artistic work’s power to endure. Tetris: The Games People Play is published by First Second Books and is available on in bookstores on 10/12/2016.

Team Paper Girls concludes their second arc with issue #10, and this last chapter delivers as much crazy action and as many narrative twists as the previous ones.

Turns out future Erin (as opposed to 1988 Erin and 2016 Erin), was not “one of the good guys” after all, finally revealing her attempt to bring the rest of the 1988 paper girls back to her time was in service to her own possibly (probably) nefarious ends. Seriously, who shoots a laser at a version of HERSELF? One of the bad guys, in my book. 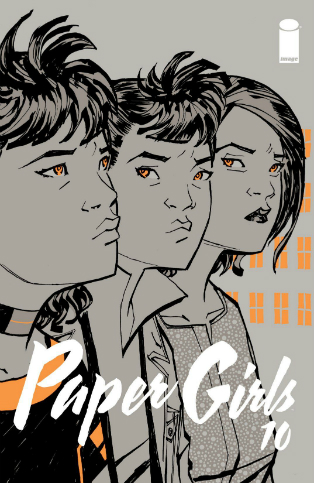 We also check in with some of the girls’ adult enemies and receive more hints as to what exactly they’re up to, though we don’t get anywhere near definitive answers—why do some of the future adults communicate solely in a weird form of internet-speak? Is that even really
believable? Just kidding, it’s totally believable; LOOK ON YOUR POSSIBLE FUTURE AND DESPAIR, 2016. DON’T GET THE WRONG IDEA, I’M SPEAKING AS MUCH TO MYSELF AS ANYONE.

One of the most impressive things about Paper Girls, apart from the always outstanding art and color work by Cliff Chiang and Matt Wilson, respectively, is the way Brian K. Vaughan is able to ground his quirky and sometimes confusing narrative in the salt-of-the-earth friendship of this group of 12-year-olds. I’m still not sure I have a firm grasp on the entirety of the proceedings, but as long as Erin, Mac, and Tiff are together and searching for their lost friend KJ, I’m willing to come along.

Paper Girls remains one of the most bizarre yet fun books on the market, and has been out Stranger Things-ing Stranger Things since before Stranger Things was a thing. If you love kid adventure stories, especially those from or set in the 80’s, take advantage of the upcoming hiatus and catch up on this first-rate book

October means spooky stuff, right? It’s National Spooky Month? Okay well if you’re into that do yourself a favor and pick up Clean Room #12. Gail Simone wrote great words and scenes and Jon Davis-Hunt did great art for it.

What makes #12 worth your time outside another great issue in a great series are its focus on its two leads. One of the beautiful things about Astrid is she’s an unrepentant anti-hero. She’s not a particularly pleasant person and doesn’t care. She’s cagey, overprotective, and cruel. She pragmatic to a fault. She’d kill a baby if she had to…and probably will. And issue #12 is better for its focus on Astrid as a cruel hero. 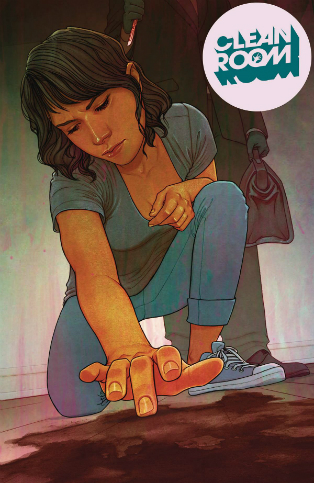 On the exact opposite of Astrid is Chloe. Chloe is pragmatic too but, unlike Astrid, reluctantly. She pulls her punches. When push comes to shove, Chloe surprises. She taps into the mind of a demon and forces him to relive the moment he tore out the neck of the mother of a girl he was possessing. And he was thirsty for more. But Chloe is a font of compassion. She wouldn’t kill a baby…well, we’ll see.

The tension between the two is truly a joy and hopefully we get even more of it as the series progresses. Seeing Chloe crossing the reluctance line has an effect. Seeing it in opposition to Astrid is even more so. They play off of each other beautifully, even when not in the same room or country. What’s more is they’re not two sides of the same coin, they’re two different characters with their own motivations.

Maybe what’s most exciting about this particular issue is that Simone chooses not to create an arc of minor villain out of snake oil salesman Wenka. Instead, Simone absolutely butchers him. It’s gory, nasty, colorful and amazing. And Astrid drinks hot cocoa and watches. But the truly great thing is that this intermediate villain is a point where some stories get bogged down. Instead, Gail Simone obliterates him.

So if you like your demons spiky, your blood deep red, and your anti-heroes to be scary young women building up a Scientology-esque fortress against the forces of hell, pick up Clean Room.

I’ve made a serious, life-altering decision. I’m going to stop buying Batman comics. It’s either that, or make the same complaints each month. I have the power to change my life, so I will. Speaking of complaints…

I’ve been reading Batman comics off and on for almost 30 years, so what’s finally pushed me over the edge? I had positive feelings for the Batman corner of DC’s “Rebirth,” but the current “Night of the Monster Men” and preceding “I am Gotham” (and whatever not-Batman Incorporated nonsense is going on in Detective Comics) are leaving an increasingly unpleasant taste in my mouth. There’s too much angst 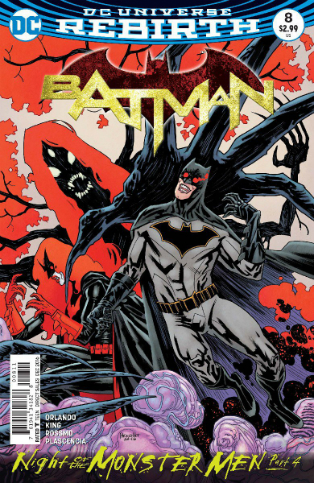 and hand wringing, too much overblown emotion and no one listening to anyone else. Someone important has “died” (or whatever is going on with Red Robin.) And Batman won’t follow his own orders (something he would definitely not stand for were it any other member of the extended family.)

If there is a positive to all this, and I’m having trouble seeing any, I’m hoping this annoying disorganization of not-Batman Incorporated is what leads to Batwoman going off on her own (readers will have to wait until Spring 2017 for the forthcoming Batwoman solo book, though.) This is purely speculation, but maybe the military mind that Batman tapped to lead not-Batman Incorporated gets shit-full of Batman’s nonsense and tells him to go screw.

Maybe my dissatisfaction is more with the Detective book than the Batman book? The two titles will always be tied together in my purchasing and reading so I find faults with both books. Other areas of frustration are: the continuing twice-monthly publishing schedules (which is not good for story quality in the long run;) the constant multi-title crossovers (my comics budget is limited and I long ago saw the futility in buying every tie-in;) a clownish, Venom-abusing Hugo Strange (seriously, this character should be treated similar to the sinister genius of Ra’s Al Ghul;) DC’s inability to have a consistent look for Duke Thomas (or even Alfred!)

But to stick to Batman #8, while I can enjoy Riley Rossmo’s art there are negatives on which I can’t help but focus. Rossmo’s monsters are appropriately over-the-top, and his aerial battle scenes show interesting angles and perspective on the city below. However, his humans, specifically their faces, are too manga for me, all wide-eyed and mouths agape. Honestly, Ivan Plascencia’s colors are what salvage Rossmo’s art for me.

Can I give up Batman cold turkey and whole hog, to use some overblown cliches? Realistically, I’ll keep buying the one decent Bat-book out there, All-Star Batman, for the time being, but Batman and Detective are off the list. There are other artists and writers and publishers vying for my money, and it’s time I gave someone else a chance.