The following is a reprint from the Theme section of Unwinnable Monthly Issue Seventy-Seven tackling Bad Luck. If you enjoy what you read, please consider purchasing the issue or subscribing.

You ever wonder about the lives of henchmen? Do they have families? Hobbies? Dreams? Do they ever aspire to be more than a mere cog in massive, insidious machines of incomprehensible evil that works in the shadows to govern the world through god-like control of our most intimate secrets?

And where the heck do they go for lunch?

The last question is an easy one. Green Beans. It’s a place called Green Beans. It’s a Starbucks rip-off found on government facilities all over the world. Google it if you don’t believe me. You know what else is found on government facilities all over the world? The secret subterranean lairs of a global supervillain cabal. These lairs are filled to the gills with people hungry for both power and lunch, sometimes even a power lunch. Every day at noon, black silos explode from the earth like the giant, gruesome fingers of a Great Old One, black hatches swish open, and an army of henchmen and their cruel overseers spill out and march straight into Green Beans. They order burnt coffee and lukewarm yogurt parfaits (their only consolation in life), and then march right back into the silos. The nefarious onyx columns then disappear back into the earth, making a horrible sucking sound as they go, like Cthulhu going to town on a Slurpee the size of the Eiffel Tower. Underground, the minions of the dark resume their scheme to seize the world.

Let the reader understand that I risk my life in sharing these secrets. When the foul traitor – er, noble hero, sorry – Edward Snowden fled our clutches and contacted Washington Post reporter Barton Gellman to leak classified material, he warned that the US intelligence community “will most certainly kill you.” He was right to do so. The US intelligence community (or “IC,” as we say in the secret subterranean lair) is both very coordinated and highly capable of rapidly responding to every whisper of a threat with lethal force. Please don’t doubt that! It’s important for our reputation that you don’t. Mr. Gellman, for example, is now mostly dead (save for the preserved head, of course), and his personal life and social media accounts are managed by a team of Gellman lookalikes. And did you hear what happened when Robby McPherson of Colorado blew the whistle on HAARP for turning cancer cells into man-sized radioactive mutants? No, you didn’t, and you never will.

Forget I said that thing about mutants. 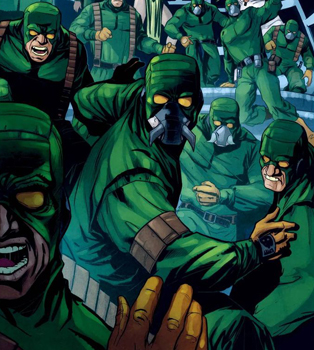 Returning to the point: I now put myself at risk of decapitation and replacement by my former fellow henchman. You see, I too was an underling in a massive, insidious machine of incomprehensible evil. I worked for the National Security Agency, the nerve center for a vast conspiracy to dominate the world by gobbling up every bit and byte of data in existence. As an active duty Marine in the 2670 MOS, I was trained as a translator of Middle East languages. Rather than engage in the War on Terror, however, I was secreted away to NSA Georgia, a skull-shaped metal tomb hidden in the waters of Slaughter Swamp, located just outside of the city of Augusta. There I was forced to work on a single objective: undo the Constitution by any means, necessary or otherwise (I definitely didn’t provide intelligence to our policy-makers and deployed forces, as the NSA definitely doesn’t have interest in that sort of thing).

The reason I break my silence now and face certain doom is to make a simple plea: Remember that henchmen are people too.

We do in fact have families, hobbies, and dreams. We do have aspirations to be more than mere cogs. I once worked with a man who aspired to be a sprocket. Sure, I think he may have spent so much time in the Employee Reeducation and Compliance Box that it melted his brain and made him literally want to be a sprocket, but it was an aspiration nonetheless. As Pope Francis – the archlord of a rival cabal – once said, “Who am I to judge?”

It may not seem worth it to risk life and limb to ask for pity, but I assure you it is. We get so very little of it. The forces of liberty and justice can’t be brought to their knees if henchmen don’t do what they do, yet recognition – let alone gratitude! – is scant, like water in the Atacama desert. We hammer away at our keyboards day in and day out, impeccably transcribing every call you’ve ever made, filing away each of your texts and categorizing every last one of your nude selfies. We are compensated for our endless labor with only the cruel lashes from a monstrous, whip-wielding robot named Cat O’ Nine Thousand Tails. Lunch at Green Beans is its own punishment, for the food is terrible and riding in those black silos is very, very scary.

We fare no better outside work, either. Home life is lonesome and awkward, because as a matter of policy the NSA holds your two closest blood relatives hostage in laser jail. This is to cut down on whistleblowers, as otherwise there’d be dozens of NSA leaks every day. This, by the way, is how Snowden got away: the NSA mistakenly kidnapped his girlfriend’s parents instead of his own. Her parents disapproved of their daughter’s choice in men, thus making Snowden’s decision to leave them to the fiery beams of laser jail a simple one. 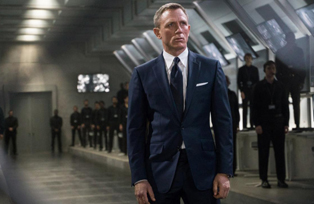 And have you seen how Hollywood treats us? Take the latest Bond film, Spectre. Think back to the scene where the “villain” kindly gives the smug, ungrateful spy a tour of his NSA-inspired command room. The walls are lined with henchmen monitoring the world’s data streams. It was such an accurate recreation of the NSA workspace that when I saw it I momentarily felt a whip brush the scars on my back. Now, from the filmmaker’s point of view, these are bad men! They are implicated in an evil plot, which is clearly unfair. Did Bond ask about their intentions? Of course he didn’t. After all, they were but lowly henchmen, flunkies so far down in the villain’s pocket they vied for breathing space with sandwich crumbs and cat hair. Perhaps these henchmen had good reason think that a secretive, unchecked organization fomenting terror across the globe was a pretty good candidate for ruler of the world. The question was never even asked. The movie just progressed to some rumpus with Bond and a cat, and the next thing you know all the henchmen have been killed off-screen in an explosion. They died alone and likely poorly paid.

My heart was both shaken and stirred by this scene. Hollywood spends millions on animal charities, yet they can’t spare henchmen two seconds for a decent movie death. We are abused in our workplace, isolated at home and belittled by the media. We henchmen would fare no better with our fellow citizens, I suspect, if our fate was in their hands. Let’s say that the helmet-shaped metal tomb under that Georgia swamp capsized and drowned all the NSA employees within. Would the rest of America shed a single tear?

Come on. Wouldn’t you feel a little satisfaction hearing that something horrible had happened at the National Security Agency, even though you don’t really know what goes on inside?

There are a few problems with the assumption a government institution shrouded in secrecy is a real-life Guild of Calamitous Intent. For one, where do they get their legions of henchmen? Are they farmed in a fruit orchard? To be fair, I don’t remember the first two years of my life, so it’s not entirely impossible I was plucked from a tree. Another kink: Americans are diverse, opinionated and noisy. That bodes horribly for any organization that requires tens of thousands of individuals silently working in concert to take over the world.

We all want to be part of something big. We want to be the hero in the fight against injustice. I know I do. This, however, makes it easy to swiftly mythologize the narrative, to turn quotidian affairs like defense policy into epic battles between good and evil. Lord knows I’m guilty of exaggeration for the sake of a good story or joke, or even getting my way. Not every battle is against a supervillain, though. Very few are. Are there matters worth questioning, policies worth challenging? Yes, absolutely. But not at the expense of our common humanity. Not at the expense of truth, which is more than an intriguing set of decontextualized facts. Truth is a picture of the whole reality, including the parts that might interfere with our own hero’s journey. Sometimes we have to give up the idea that we’re part of the Justice League. I’ve had to do it; I worked military intelligence during the War on Terror, for Pete’s sake. I know it’s not easy. It’s an important part of living in the real world, however.

If that’s too much to ask, though, and the story is just too satisfying to give up, then I at least ask this: Have pity on us poor henchmen, and please send us all your thoughts, prayers, and well-wishes. For the whips of the Cat O’ Nine Thousand Tails are relentless and Green Beans just ran out of parfaits.

C. T. Casberg is a veteran of the U.S. Marine Corps, where he served as a linguist assigned to the National Security Agency. He graduated from UNC Chapel Hill with a concentration in the Middle East and Politics. He uses absolutely none of his real skills and instead writes on faith, videogames and humor. Find him on Twitter @ctcasberg.