Few would accuse Ubisoft’s 2011 From Dust of being “narratively dense” or Kojima-like in its storytelling. In fact, the story is a pretty breezy. In a nutshell, a tribe of mysterious people blow a horn to reawaken their god or something, and that god helps them reach their promised land. Eventually, they do, and acquire all sorts of neat powers along the way. A few months after the game was released there was some talk of expansions, or a possible franchise, but the From Dust universe seems to have gone quite.

Until, maybe, perhaps, Far Cry Primal. Though made by an entirely different division of Ubisoft, and in a totally different country, there is something oddly familiar about the masks that the Izila tribe wear. What’s significant is the Izila tribe aren’t the good guys. They’re the bad guys. They’re the burn happy, flame setting, world on fire villains of the game who are cartoonishly excited by fire. I’ll admit there’s no definite link between the two games except that their masks look kind of similar and the development team has said that From Dust takes place in “another universe” …but what does that say about the tribe from From Dust?

Theory A: Far Cry Primal is the future of From Dust

When From Dust ends, the little explorers have reached their land of milk and honey, but what guarantees are there that it lasted? The tribes people began the game morose that their god had left them. Then, they essentially enlisted the player the way that Command and Conquer refers to the 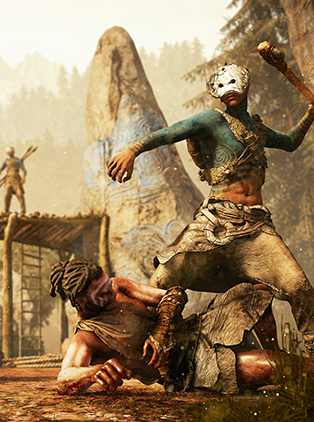 player as a general Skyping in. So when you close the game does that mean that their god abandons them again? It’s possible that eventually, abandoned by their god, the tribes people enter another mythical portal and wind up in the world of Oros.

This evolution would explain why the masks in Primal are slightly different shapes and now the tribe uses blue to identify themselves. Abandoned by their god a second time, it’s not hard to imagine that they dissent from a peaceful tribe and become something else. In fact, its not particularly difficult to imagine that it was this tendency toward violence and love of destructive fire that caused their original god to abandon them. Which brings me to my second point…

Theory B: Far Cry Primal is the Past of From Dust

Equally possible is that the Izila are what came before From Dust and were forced out of Oros by the player. It’s not hard to feel abandoned by your god when one sabretooth tiger commanding juggernaut systematically murders your leaders and burns your towns. Prelude to one of their weird spirit caves and emergence in the world of From Dust. After their vicious ways, and love of fire, it makes sense that their new god leading them would want to their forsake fiery ways and live peacefully on an island surrounded by water. Here the masks are white in From Dust because they’ve forsaken their old ways.

Far Cry: New Dawn’s Only Compelling Feature is Blowing Things Up with Stu

The Night Manager: Applying to be a Spy