The following is a reprint from Unwinnable Weekly Issue Seventy Four. If you enjoy what you read, please consider purchasing the issue or subscribing.

Han Solo was my first love.

I mean, have you seen Harrison Ford? That man elevated the lopsided smile to an art form.

But it’s more than that. I love Han because of the journey that he and Leia undertake over the course of the trilogy. Because of the way they fall in love in Empire Strikes Back and become a partnership in Return of the Jedi.

In A New Hope, though? I give Han Solo’s romantic appeal in that movie a resounding “eh.” He’s too arrogant, too aggressive. Too much scoundrel, not enough heart of gold. Plus, he’s got that chest hair spilling out of his shirt, which, maybe that’s your thing, but…eh.

Then there’s Empire Strikes Back Han. From the minute he walks on-screen in that sleek black jacket everything about him is smoother. Smooth hair, smooth grin, smooth talk. Part of it, I think, is that Harrison Ford grew as an actor from 1977 to 1981. His gestures weren’t as exaggerated anymore. He trusted his eyes to do the talking. It also helps that Ford was essentially the romantic lead of Empire, and the beloved of my childhood hero: Princess Leia.

Han isn’t in it for the money anymore. Since his heelturn at the end of A New Hope, he’s clearly all-in on this save-the-galaxy thing, try as he might to pretend he’s not. The only reason he’s leaving is to pay off old debts that continue to hang over his head. He practically begs Leia to give him any excuse to stay, but Leia refuses to play along, because “angry flirtations with space pirates” is a bit further down on her to-do list than “topple the Galactic Empire.” Again: hero.

We saw Han and Leia argue in A New Hope, but in Empire it’s different. Both the writing and the acting immediately communicate that these two people now know each other very well. Maybe a little too well. They’re not arguing anymore. They’re bickering.

Let me tell you my favorite scene in all of Star Wars. It’s so great. Once I tell you you’ll never unsee it. At the beginning of Empire, Han and Leia are 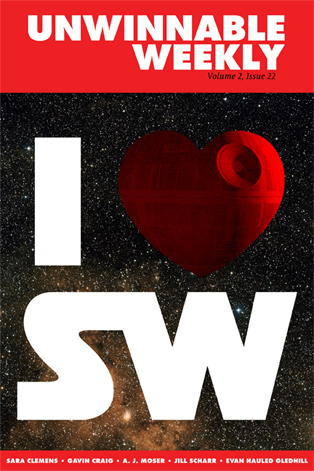 walking through the halls of Echo base, bickering, when they stop in the middle of the hallway to shout in each other’s faces. But right in the middle of it, another Rebel walks up the hallway, carrying a large box. Box guy clearly just wants to get his box where it’s going, and he’s very clearly mortified to find his way blocked by Princess Leia and Captain Solo, who, without breaking their furious eye contact, both lean back to allow box guy through, then lean back in and continue shouting as box guy scurries off-screen. It’s amazing. It’s so beautifully awkward.

From there Leia and Han are thrown into a movie-long trust fall, forced to rely on each other as they flee the Empire. The bar for heterosexual romance in action movies is admittedly pretty low, but so many other action films infantilize and sexualize their female leads, make them both burdens to the male leads and yet at the same time conveniently disposable, that Han and Leia’s equal footing in Empire was a revelation to me as a child. The bickering continues, but Han never tries to impress Leia by belittling her or trying to out-macho her. It’s clear their respect for each other only grows.

That leads us to the end of Empire, where the most heroic thing Han can ultimately do for Leia is not to fight. To allow himself to be frozen in carbonite, in the hopes that his sacrifice will save Leia’s life. His act of non-aggression is so much more sincere (cocky “I know” aside) than any kind of belligerence or posturing machismo could have been.

And all that sets us up for Return of the Jedi, whose entire lengthy first act is Leia and the gang rescuing Han. Sure, Luke walks in like he’s the main event at a really skeezy rock concert, but it’s Leia who actually unfreezes Han, Leia who holds him as he swoons in her arms. Hey, I don’t think I’m alone in relishing the sight of a lady saving a fella.

From that moment on, Han and Leia are a team. They spend the whole rest of the movie saving each other and smiling at each other and leaning on each other. It’s beautiful. And still, after all that, Han doesn’t just assume he’s “won” Leia. He even backs down when he thinks Leia has feelings for Luke. And again, this kind of respect shouldn’t be an exception to the rule, but Han and Leia’s on-screen relationship was a large part of what taught me that in the first place.

That’s why Han Solo was the quintessential romantic hero of my childhood and teenage years: because he is one half of a partnership that was forged along the way of the heroic journey. The Han I love is not the swaggering badass of A New Hope. He’s the fumbling romantic of Empire, the trusted partner of Jedi.

Han doesn’t save Leia. They save each other.

Jill Scharr is a Seattle-based videogame writer. She gave up trying to manage her expectations over The Force Awakens several months ago.