A few nights ago, I was driving with my friend Ian into the wilds of western New Jersey. My girlfriend’s parents live out there, in a town named Califon (fun fact: the town was supposed to be called California, but that was too long for the sign, so…) and her car had broken down while she was out there visiting. We were the rescue team.

It was raining. The bulk of the ride, a 35-mile straight shot out Route 78, was about what you’d expect. It was late, so there wasn’t much on the road aside of the occasional long haul tractor trailer. Then we turned off our exit into the hilly woods. At once, the road in front of us filled with fog and the pitch darkness pressed in from the roadside. We slowed to a crawl along the winding road.

Ian made the ch-ch-ch-ha-ha-ha sound effect from the Friday the 13th movies.

A second later, we were reciting the beginning of John Houseman’s story from John Carpenter’s The Fog: “11:55, almost midnight. Enough time for one more story. One more story before 12:00, just to keep us warm.”

Neither of said, “I feel like we just drove into a horror movie.” We didn’t have to.

As it happens, this is exactly why I love The Fog.

Horror movies have a dismaying tendency to take place in alternate universes that don’t have horror movies. This is particularly true of zombie movies – how many times have you watched the scene where the protagonist discovers the only way to kill them is to shoot them in the head? Slasher flicks, particularly after Scream, have a modicum of self-awareness. Those teenage campers will no doubt joke about a monster in the woods, but when confronted by that monster, they seldom adapt appropriately. They adopt denial as their defense. It is just all too much. This can’t be happening. But it is. And then they get gutted.

This isn’t the case in The Fog. The sinister, titular mist that rolls in off the ocean into Antonio Bay conceals the vengeful spirits of mariners who were betrayed by the town’s founders one hundred years ago. Now, on the anniversary of the town’s founding, they have returned to repay that betrayal with blood.

Admittedly, there isn’t much of a playbook concerning sailor revenants wielding gaff hooks in horror lore, but that doesn’t stop our protagonists. No one writes off the unexplained occurrences, like clocks breaking and empty cars honking their horns, as the wind. When the radio DJ Stevie, played by Adrienne Barbeau, sees a piece of driftwood spontaneously combust while a ghostly voice intones a passage from “Rime of the Ancient Mariner,” she doesn’t deny the evidence of her senses. Instead, she immediately tells her son to stay away from the beach where he found it.

When things ramp up in the final act, the characters know something is seriously wrong. Stevie gets on the radio and tells the town that the fog is dangerous and people act decisively. They don’t waste time wondering if Stevie is off her gourd. They hedge their bets. They get the hell out of the fog.

This practicality runs through most of Carpenter’s films. The men of US Outpost #31 don’t worry about the particulars of their shape-shifting guest, they just fire up the flamethrowers. Who cares how a car can drive itself and kill? Let’s just get it in the compactor. Even Laurie in Halloween has her moments of resolute thinking, though she does have a bad habit of dropping the knife next to the Shape’s not-quite-dead body.

Speaking of Halloween, countless horror movies since have relied on a stark, but inside-out morality that has its origins in that movie. The formula goes something like this: Teenagers go someplace secluded to do something they shouldn’t do – any behavior the filmmakers disapprove of, from drinking to using drugs to having sex. The monster then appears, terrorizing and killing all but the lone character who abstained from the earlier debauchery.

The problem with this is twofold. First, in order to sell their characters as immoral and worthy of punishment, the movie has to show the behavior it supposedly disapproves of and that very same nudity and violence is the titillation that audiences show up for. Second, this sets audiences up to root for the monster against the teens. Fans of this particular kind of film are generally preoccupied with the number of breasts they see and the intricacies of the often byzantine kills. Morality play or power fantasy, whatever it is, it isn’t horror. 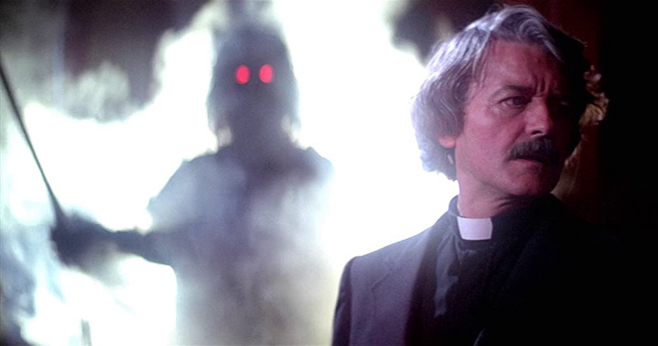 The Fog never resorts to this kind of lurid moral lecturing. These ghosts have no interest in such earthly motivations. There is no curse, here, not divine punishment. Their victims over the course of the movie are three crusty sailors, a middle-aged weatherman, a harmless old lady and the local pastor. The only thing these people are are guilty of is the bad luck of their ancestry. Furthermore, the ghosts attempt to murder a hitchhiker, the radio DJ and her son, all of whom are from out of town and have no connection to Antonio Bay’s history.

Despite being born of a great injustice – their murder and plundering at the hand of those town elder – the ghosts have not returned to right wrongs. They have come to Antonio Bay to wreak havoc. In death, they sloughed off their earthly morality to become an unbound force of violence, claiming victims indiscriminately like a hurricane or an earthquake or a typhoon.

Or the quiet danger of a bank of fog.

This is part of an ongoing series of essays looking at the horror films of John Carpenter. Previously, I looked broadly at Carpenter’s life and career and the classic Halloween. Next, I tackle The Thing. Feel free to disagree with me on Twitter, @StuHorvath.