A week and a half ago, the Rookie of the Year made his concert debut at the prestigious Mercury Lounge in Manhattan.

For someone with no musical talent whatsoever, I have had more than my fair share of rock and roll moments.

I’ve discussed mumbled song lyrics with Karen Peris of the Innocence Mission. I introduced my best friend to Richie Havens at a party once. Damien Jurado gave me permission to steal his music. Thor Harris from Shearwater said he loved my toggle coat. Eef Barzelay of Clem Snide wrote a song about me and my sister. I’ve told Paul Simon in person how much his music means to me. I’ve had Michael Stipe wear my hat to sing “Losing My Religion.”

But until a week and a half ago, I had never been invited by a musician to perform with him in front of a live audience. 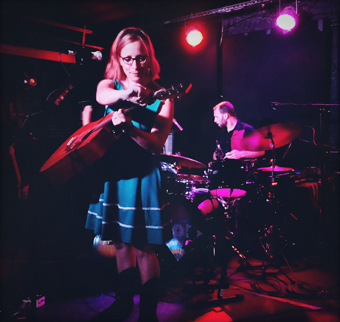 That all changed when Karl Blau, multi-instrumentalist best known for his work with indie folkster Laura Veirs – my obsession for whom is well-documented – decided, mid-song, that I looked capable of accompanying him on percussion.

Without warning, he stopped banging on one of his many crazy homemade-looking instruments, handed it to me and asked me to “keep playing that part.”

What he handed me may very well have a name. But I see no reason to look it up because it was a goddamn metal taco.

Without the time to be nervous, I propped Karl Blau’s metal taco up against some speaker wires on the stage, took two small mallets, and did my best to replicate what he had been doing with them.

I was almost certainly awful at it. But it didn’t matter. I was rocking in front of hundreds of people at Mercury Lounge.

When the song ended, he asked me to keep going, and, all of a sudden, I was playing a drum solo on my metal taco.

After a few moments, he waved me to come to a stop, in that way band members do with each other to ensure and savor a graceful finish. I stopped playing, and for two or three beats the room fell silent.

And then the crowd cheered.

After the show, Karl Blau, who had returned to the stage to play with Laura Veirs’ band on the second stop on their tour to support her awesome new album, Warp and Weft, was standing outside in a homemade shirt.

“Thanks for giving me my Mercury Lounge debut,” I said to him.

“Yes! Matt, right? That was awesome,” he said with a big smile.

I apologized for having no rhythm. He said no way, you were great.

And as I smiled back and waved goodbye, he waved too.

I have no plans whatsoever to stop.

Hand me a metal taco and, at a moment’s notice, I will tap, bang and strike it.

It’s my duty and privilege. Because I am now living proof that you don’t need any skill at all to make a mark in show business.

You too can be a rock and roll star.

Matt Marrone also enjoys singing nonsensical songs to and about his friends and coworkers. You can follow him on Twitter @thebigm.