I have a complicated relationship with the game Resonance.

It’s an independent adventure game that went into development somewhere around 2006, when I was first discovering that indie games existed. It was clearly a passion project for developer Vince Twelve, and he’d worked on several of the better indie adventures, so for six long years I followed his development. I even offered to be a beta tester during its final push.

If I’d simply waited a long time for a game and been disappointed, that would be an uncomplicated relationship. The reasons why Resonance is complicated are also complicated, but to explain how, I’m going to have to spoil pretty much the entire thing. So, consider yourself warned.

I don’t think anyone making adventure games today understands the guts of the genre better than Vince Twelve.

When the game begins, I’m a physicist named Ed. The lead scientist at my lab, Dr. Morales, has been researching a standard-issue sci-fi MacGuffin, the kind of discovery that will save the world if it doesn’t destroy it. In short order, the game is switching me between Ed and three other playable characters – Dr. Anna Castellanos, the niece of Dr. Morales; Detective Bennett of the local police department; and Ray, a citizen journalist. These unrelated points converge in the hospital after an explosion at the lab kills Dr. Morales, implying that someone has both discovered and weaponized his secret research. So my ragtag foursome aims to track down the vault where Dr. Morales’ research is hidden before his killers do, raising the question of whether they will retrieve the research or erase it.

Now, up til this point, Ed has been in nearly every scene. The game mostly decides when I switch characters, but it leaves me in control of Ed more than anyone else. By the end of Act 1, he has been, almost by default, the game’s protagonist. As soon as Act 2 begins, I am able to freely shift between all four characters. (Don’t ask me why the human mind can comprehend this, thinking of myself as Anna one moment and Bennett the next, sometimes shifting mid-conversation from speaker to listener, but it can; I’ve been doing this at least since Maniac Mansion.) Here, Anna delves into her family history, largely through a series of flashbacks about her uncle; Ray digs from an informant; Bennett makes use of the facilities at police headquarters; and Ed… well, mostly Ed stands in a field.

So there’s a wrinkle: Anna is the protagonist of Act 2. Her excursions into family secrets become the center of the story. She’s the only character with any meaningful backstory, and a revelation about her uncle, which we’ll come to in a bit, is the emotional climax of the game’s middle third. Ed isn’t necessary for any puzzles anymore, and mostly functions as a kind of confidante, or maybe love interest, to Anna. Well, that’s a nice gender-flip – a female protagonist with a male sidekick.

When we finally uncover the vault beneath Dr. Morales’ lab, Anna is left alone with it. It’s her inheritance, after all. The clue that unlocks the vault is buried in one of Anna’s repressed memories (memories being a central mechanic in Resonance), and unearthing it comes with an additional find: that Dr. Morales was Anna’s father, not her uncle. The vault opens, and a final recording from Dr. Morales apologizes to Anna for keeping this secret so long, and a menu gives her the choice of whether to preserve or delete Dr. Morales’ research.

This is everything the game’s been building towards for the past 8-10 hours, but the villains have yet to show themselves. At this point I’m expecting there will be some kind of showdown with the murderers where we uncover their intentions, perhaps with Ed and Anna becoming more joint-protagonists, and then everything will be wrapped up.

What I am not expecting is what follows: Ed shoots Anna in the head with Bennett’s gun, and then the game crashes. 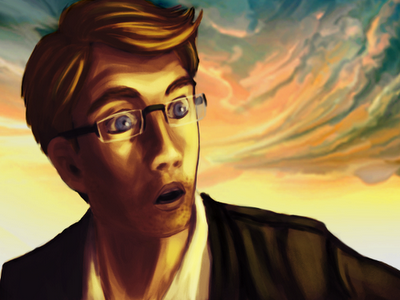 And, being a beta tester, I get to replicate the conditions of the crash, this time deleting the research, this time preserving it, and watching Anna get murdered again and again. The game crashes every time.

All I can do is file a bug report and wait for the next build.

But when the new build comes out, I avoid it. I don’t want to be another person on the web who disappears from an obligation, but something about that scene is bothering me. I tell myself I’ll get back to it soon until the game is released, and still, I don’t play it. For months.

What has happened here? How can Anna be dead? You can’t fridge the protagonist. There was some disjoint between what the developer was telling me about the game and what I’d experienced playing it. Ed was a murderer, Anna was dead, and Bennett and Ray were left to carry the story. What I’d seen as a welcome female lead was actually another sacrificial maiden, murdered to motivate the male characters I cared about the least.

And how, precisely, can Ed turn out to be a murderer? I’m not distressed simply because I kinda liked the guy (though I did – he fits in with fellow adventure game protagonists like Guybrush Threepwood and George Stobbart, all socially awkward blondes). I’m distressed because I kinda was the guy. And when I’d solved a rather complicated series of puzzles in order to save Dr. Morales, it was all a ruse because I’d been responsible for the explosion. And when I’d first spoken to Anna on the subway, thinking I was striking up a conversation with my commute-hour crush, I was actually establishing contact with Dr. Morales’ next of kin. I had selected lies from Ed’s dialogue trees thinking they were truth.

This wasn’t the real Ed. This was the persona he used to deceive the other characters. Ed knows his intentions, but I don’t, even when I am tasked with embodying him. Resonance is the only game I know of in which you are asked to play as a main character’s façade.

But Ed can’t deceive me; to Ed there is no me. Instead I’ve been deceived by the developer; I’ve been deceived by Vince. This kind of Kaiser Soze shit is common enough in novels and screenplays, where viewers commonly enjoy being artfully deceived. These waters get muddied once we make the story interactive. I’m less bothered by Ed murdering Anna than by having helped him do it.

I hadn’t found the bond of trust between player and developer – that is, that when the developer gives me clues about the character I’m to embody, those clues can be trusted – until someone broke it. If Resonance is trying to explore this bizarre terrain, it’s a failure, in large part because I suspect it’s not intentional.

What finally got me to finish off Resonance was, in all honesty, Hurricane Sandy. I was stuck in my house for a day with the threat of losing power, so it seemed a sensible time to charge up the laptop and strike the game from my bucket list. Replaying from the beginning, I saw the cues that Ed might not be what he seemed – ambiguous expressions and noncommittal statements, and, right, his apartment isn’t a mess because he’s a workaholic, but because he just moved in so he could murder Dr. Morales. I wondered if Ed would remain a playable character after the murder – as Bennett and Ray no doubt tried to stop his plan, whatever it was, would I retain control of the villain? Would I be both cat and mouse? There was a sequence in the second Gabriel Knight where you switch control between Grace trying to keep Gabriel from making a mess of things and Gabriel trying to accomplish exactly that. It didn’t, quite frankly, work then, but player characters with cross-purposes was at least a compelling idea. 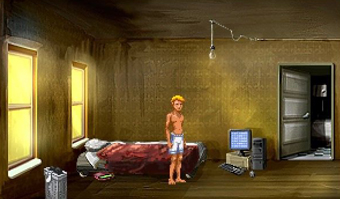 But no. After watching Ed murder Anna once more, I am never granted control of him again. Meaning the protagonist of Act 1 murders the protagonist of Act 2 and becomes the villain of Act 3. The final chunk of Resonance becomes a kind of buddy cop movie starring Bennett and Ray. (I’ll say one thing for Resonance – it’s egalitarian. Everyone gets to be the protagonist.) A rather complex conspiracy is introduced, though it doesn’t get enough space to become interesting, and it all hinges on some lip service to “free will vs. determinism.” Free will, in this case, is defined as the things the developer won’t allow, and determinism is the things he will. If a character dies while solving a puzzle, the game rewinds, but if they die when Vince says they are to die, they stay dead.

The thing that complicates my relationship with Resonance the most is that, well, I really like Vince Twelve. When I was stumped on a third-act puzzle, he tweeted clues at me! I know what this game means to him. And, from a pure design standpoint, Resonance’s puzzle strikes a balance between smart, hard and fair that most of the classics achieve only intermittently. I don’t think anyone making adventure games today understands the guts of the genre better than Vince Twelve. Not liking so expertly crafted a game feels like refusing a designer watch because I don’t like the font on the logo.

It just goes to show what a weird position the adventure game designer is in. You can put your puzzles into your plot with the utmost care and still end up with something that doesn’t work, even if, taken alone, both the plot and the design seem perfectly sound. There’s something in the transfer between narrative and interactivity. When that transfer is successful, it’s one of the most compelling experiences a gamer can have. It’s why some of us are married to this dead genre.

And, generally, when it fails, it at least fails interestingly.

Finding Peace Where I Can Get It
Previous Post