This was sex, I just didn’t know it yet.

I was about eight years old when my school upgraded its 12 computers to Windows 95, installed Netscape Navigator and hooked them up to the World Wide Web. At this point in my life, sex was simply a naughty word highlighted in dictionaries and carved into the school’s toilet walls. I wasn’t aware of the word’s true meaning and I didn’t have the inclination to find out.

It was around the same time that Lara Croft had leapt from the confines of her games and onto everyone’s lips. Tomb Raider III dominated the charts. Lara was featured on the cover of Time, in Playboy’s controversial August 1999 issue and even in ads for Lucozade energy drinks.

The Internet was primarily used in our school during weekly IT classes where we’d be tasked with having to find a photo of a famous landmark or the works of a particular artist. It wasn’t until the last 10 minutes or so of our lessons that we were allowed to do what we pleased online.

Some of my friends played Java games, some got excited about pictures of Bruce Lee, some attempted to woo middle-aged women in chat rooms and I, in case you were wondering, looked up pre-release Sonic The Hedgehog screenshots (as well as fan pictures). 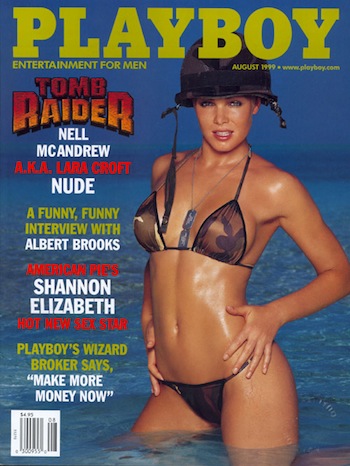 However, there was a small group of boys I knew, collectively known as “The Brotherhood of Nod,” who scoured the Internet in search of the fabled nude shot of Lara Croft. No such picture existed, but they were able to find the collection of the more tasteful images Eidos Interactive released for the enjoyment of Lara’s rapidly growing fanbase.

“Cor blimey, have a look at this one, Michael. You can see her sexy boobies!”

I would always be apprehensive of joining my friends as they huddled around The Brotherhood’s computer screen. I was a timid and well-behaved child who did all that was humanly possible to stay out of trouble, so looking at partially naked images of Miss Croft was out of the question. Besides, one time a boy had been severely scolded for looking up photos of real women in swimsuits. These pictures of Lara were the same, weren’t they?

But the teachers never paid any mind to The Brotherhood’s ogling over Lara’s feminine features. The woman wasn’t real, therefore her sex appeal wasn’t real either. This was the mindset I assumed all adults took towards Lara Croft. Eventially caving to peer pressure, it was the outlook I adopted as I joined my giggling friends.

Lara was our own secret corner of a forbidden, sexy world full of tight swimsuits and loose bedsheets. We were completely free from the concerns of parents and teachers, as well as any responsibility to follow our own premature moral compasses.

Large, firm breasts hung defiantly above a narrow waist. Wide hips started a trail down large, strong thighs and long legs. She wasn’t real, but her round shapes and steep angles held a secret I was too young to fully understand. I saw that she was attractive, but I didn’t know for what reason. I wanted to see more, but I didn’t know why.

This was sex, I just didn’t know it yet.

Ultimately Lara Croft turned out to be nothing more than a schoolyard fad. A false goddess who grew far bigger than the tricky games she originated from; games, might I add, that were far too difficult for me and my friends to beat without the liberal use of cheats. But between the years of Sonic the Hedgehog and Pokémon, Lara was my queen of videogames.

The confusing recognition of Lara Croft’s sexual attractiveness that I experienced was the psychological stirring of a prepubescent sexuality. The tasteful nudie shots were simply a digital window through which I glimpsed a primitive desire I would not meet for several years to come.

During these early years videogames dominated my thoughts, my conversations and most of my spare time. But even though I held my innocent head high amidst the pixelated clouds, the truth of the world still emerged. Through videogames, sex managed to find me.

Hear more about Michael Westgarth’s sexual maturation (among other things) on Twitter @megawestgarth.