My best birthdays occurred in close proximity to videogames. I grew up in South Florida in the ‘80s – a place that was more strip malls and subdivisions than the pastel neon of Miami Vice. In the podunk wilds of South Broward County there was a fabulous arcade made up to look like a giant castle. Out back was a go-kart track ringed in bald tires. Inside, though, was a glorious collection of every coin-gobbling video distraction you could imagine. The place felt like it was organized by a hoarder. The rooms had been cobbled together willy-nilly then filled to the rafters with arcade cabinets. Some had ceilings that barely accommodated the machines and others felt like cavernous warehouses. The common denominator, though, was the maze of games – the kind a kid with a pocket full of tokens could get lost in for hours. 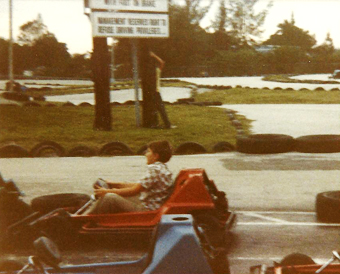 Most adults couldn’t stand the place. My mother would camp out in the dining room and read a book for the duration of the party, venturing out only to collect us at the end of the evening. While I was there, I created indelible memories – images and sensations that remain clear while much of my childhood becomes a blur of half-remembered stories and recreations triangulated from old photos.

I recall the first time I put my hands on the twin sticks of Krull. And I can still remember stepping into the black light glow of Discs of Tron. I marveled at the technological wonder of Cliffhanger and Dragon’s Lair – “They’re cartoons that you control!” I was mindblown hearing “Separate Ways” come out of the Journey machine. Though all of my school friends were in attendance, the only time we really hung out was to regroup for food, gifts and a lap or two around the go-kart track. One year, I got a portfolio full of Return of the Jedi concept art by Ralph McQuarrie and a battered copy of The Amazing Spider-Man #33 – a story that I’d read over and over until the pages crumbled in my hands.

I reminisce in such a mawkish way because I just turned 40. It is one of those milestones perfect for Judd Apatow movies and greeting card gags. I, too, am having a hard time coming up with anything constructive or new to be gleaned from this day. I am no longer young. I am, officially, a member of the old white dude club – company I am more often than not embarrassed to keep. Despite myself, I am using this day to take stock, measuring my accomplishments against my ambitions, my bank account balance against the cost of lunch at El Pollo Loco.

It occurred to me that I spent my 30th birthday surrounded by videogames. All my friends from Los Angeles met at the now defunct Pakk Mann arcade in Pasadena. We crammed quarters into half-functioning games, admired the hand-painted retro game characters on the walls, then retired to a nearby bar to drink ourselves silly.

In slight contrast, I cut to the chase for my 40th birthday. I met friends at a bar in Claremont called The Back Abbey. I sipped Bavik and munched on charcuterie just to the point of feeling sated. And maybe one gulp and bite beyond. The evening was spent chatting with friends – not racing or shooting or trading cash for tokens. Even though a mere 10 years ago I couldn’t have imagined a birthday without videogames, this was a fine evening – one I wouldn’t mind repeating. There is no doubt that I am getting old. And, I am slightly chagrined to admit, videogames are no longer a mandatory ingredient in my good times. So that, finally, is what it feels like to grow up.

At the Hotel Bar