The bar stool is nondescript but comfortable. My laptop bag hangs off the back. The bar top itself is an ugly pinkish marble. The walls and pillars are raw cement dressed with orange-colored wood arrayed in a vaguely Japanese lattice style. It has all the warmth of a fallout shelter. It is too bright by half.

This is the hotel bar in the Hilton Montreal Bonaventure. From this bar stool, I survey the Montreal International Game Summit 2012. People come and go. I watch.

Ed, a prominent developer and technologist, walks by, hair unkempt and glasses askew. I wave and, to my surprise, he recognizes me. In my previous conversations with him, I always got the feeling that he didn’t see me, but rather a complicated mathematical equation that represented me. I am happy to learn I was wrong. We chat about the biz for a while and pick at the dried wasabi peas in the snack bowl.

The next round of talks starts up and the bar empties out. I focus on my laptop and weed through my email.

Two women are sitting near me. One wants to leave, but the other, a pretty blonde, convinces her to have just one more glass of white wine. She is so enthused by her victory that she jumps off her stool to order. The sudden flurry of activity in my peripheral vision draws my attention and I am looking at her as she sweetly asks the bartender, “Excuse me, could I have two glasses of the house white, please?”

The bartender glares at her and proceeds to tear the white rag he was holding in half. Without saying a word, he turns and walks away.

“You certainly have a way with bartenders,” I say. She laughs. The other woman laughs. We’re all friends now.

From this bar stool, I survey the Montreal International Game Summit 2012. People come and go. I watch.

She’s Julia, an HR recruiter for a mobile game studio based in Ottawa. Her friend is Jess, a project manager at another developer in the same city. Through them, I meet a parade of other Ottawa games industry people. I get invited to the Ottawa Games Summit. I get invited to just come to Ottawa to hang out. Canadians are as friendly as they say. I had no idea Ottawa had a game industry before now.

Julia and company are going to dinner. Will I be at the party later? Yes, I will.

“I will see you there,” says Julia.

Lenny Sherman walks by. He gave the one talk that I actually went to. I flag him down. He’s a teacher, a game designer and a writer. Years ago, he wrote and produced Star Trek: The Next Generation and now is working on building an experimental game simulation space – a real life Holodeck – at a New York university. This is pretty amazing, and I tell him so. He thanks me and goes on his way.

Another waiter, one less violently inclined towards towels, brings me a glass of whiskey. I say, “Merci.” He looks at me and replies, “The accent is on the ‘I.’ If you do not say it that way, people will think you are saying something else.” I do not ask what that other pronunciation means. I think of some English words I would like to say instead, but I keep quiet. There is nothing as infuriating as helpful advice delivered in a French accent. 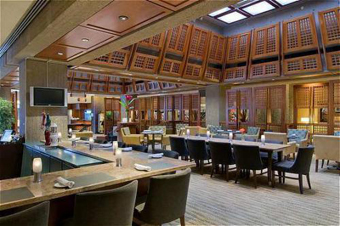 I meet Erik. He’s a big, gregarious guy – funny, whip smart and a natural storyteller. He is also from Ottawa, developing mobile games and apps, but we wind up talking more about his unusual life. After college, he moved to Israel to join the army, even though he isn’t Jewish, then went to South Korea, where he made a living selling witty custom T-shirts to the country’s expatriate community until he was deported for not paying taxes. “Soldiers with rifles marched me, carrying everything I owned, from a van to the airport. The only thing I could do was buy a ticket home. It was pretty great.”

Erik tells more stories and we laugh a great deal. Will I be at the party later? Yes, I will.

“I will see you there,” says Erik.

A Frenchman named Michel arrives to speak to Erik. You can tell at once that he is European – his accent is soft and flowing. It makes the Quebecois accent sound rustic in comparison. Someone asks him what he does. He explains that he is in mergers and acquisitions, deeply involved in the mobile segment of the gaming industry. A recitation of companies and accomplishments stretching back to the mid-’90s pours out of him. He seems to measure his success in how many businesses he has sold or closed. He talks, forever.

Erik’s wild stories sound like fiction but feel real. Michel’s dull resume sounds real, but feels false. He pulls out his phone to check the time and it is a blue Blackberry, at least 10 years old. It looks like it weighs five pounds. As he is shaking hands with everyone before leaving, he asks me again who I write for. “Wired,” I answer, the most identifiable of my outlets. “What is that?” this captain of the tech industry asks. “Is it a magazine?”

Will I be at the party later? Yes, I will.

There are six bartenders now, a cluster of green shirts standing in the center of the bar interior, the farthest point from any given patron. Empty glasses abound. They stand in a circle, muttering to each other, avoiding eye contact with the customers as if we are ravenous animals. We’re not, though. We’re just thirsty.

Mitch, my friend and colleague, comes up from the last of the talks. He has done a much better job of attending the conference part of the conference than I have. He seems a little worse off for it. It seems that, though all of the speakers are incredibly talented, not all of them are particularly interesting speakers. Most of Mitch’s recaps end with, “And then I left.”

“You did it right though,” he says. “You stayed out here, you met cool people, you talked all day. That’s the way to do these things.”

I nod. I had the best seat in the house.

Stu Horvath loves Montreal, but can’t tweet from his phone while he is there. Enjoy the silence @StuHorvath. While this is an accurate portrayal of events as I recall them, it doesn’t hold to an exact chronology and includes situations that occurred over the course of two days. All the names have been changed, even the ones you can probably figure out by using the Internet. Finally, a big thank you to the incredibly friendly folks I met this week – you were the highlight of the show!

Come back next week as The Burnt Offering returns to Assassin’s Creed III.

The Curse of the Handheld Console