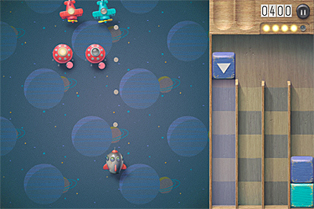 It’s interesting, perhaps, that the videogame platform with the smallest screen, the iPhone, is also the one current platform with the most games experimenting with using different sections of that screen to perform largely distinct actions. First, there was Mini Mix Mayhem, with its simultaneous mini-games needing to be balanced like spinning plates. Now we have Barrel of Donkeys’ Toybox, a game that has you playing two games simultaneously – a top-down shooter on the left and a match-three block puzzle game on the right. Except, really, “two” games is perhaps misleading; each game is as distinct as they are intermingled. Toybox is more than one game, but it’s not quite two. It’s something in between.

As the game’s own App Store page aptly describes it, Toybox is the equivalent of trying to pat your head and rub your belly at the same time. As your left thumb slides a spaceship around – shooting enemy UFOs and biplanes, while dodging projectiles – your right thumb taps columns to drop blocks, trying to keep the board clear by matching up three of the same color.

But what makes patting your head and rubbing your belly interesting and difficult in the first place isn’t that these are two distinct actions, it’s that they are two parts of the same action: head-patting-belly-rubbing, if you will. Either on their own isn’t interesting; it’s how they affect the other when performed simultaneously that is interesting. Just like head-patting-belly-rubbing, Toybox is larger than the sum of its parts. The games cross over, mingle with each other. Instead of picking up power-ups and bombs and extra lives in the shooting game, all these items are gained from combining blocks on the right. A single line of three obliterates all enemies on the screen and temporarily powers up your spaceship’s weapon. Create a chain of matching blocks and you will score an extra life. 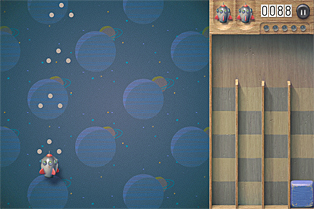 It highlights the fluidity of touchscreen controls. While the iPhone might lack the tactile feedback of actual buttons, the various and simultaneous touch and gesture-based inputs it allows creates a fluidity and malleability between the player’s actions and intent – so much so that the player can act out vastly different intents simultaneously.

Each of Toybox’s parts is, by itself, straightforward. Just like Mini Mix Mayhem, it’s when you have to play one solely in your peripheral vision that stuff gets difficult. But unlike Mini Mix Mayhem, the games here are not distinguishable “mini” games. Neither game is the primary game – each matters equally. Both killing enemy ships and matching three blocks of the same color rewards points to the same tally. Really, Toybox isn’t two games at all. It is a top-down-match-three-puzzle-shooting game. It’s one hybrid game, a mashing together. The two are inseparable. There is no Toybox shooting game without the Toybox match-three game or vice versa. Just like a kid pulling out two random toys from a toy box and imagining unique ways that the two can go together, Toybox does the same to two very conventional genres.

Some blocks and a spaceship? Well, this is what will happen.

Rookie of the Year: Save Hubig’s Pies!