Bulletstorm is not a game that demos well. You’re instantly given a taste of its wild personality, with salty space pirate-cum-protagonist Grayson Hunt fourth-wall narrating the tutorial. He jokingly jogs you through the basics of Bulletstorm’s combo-centric gun play, making you vaguely aware that you’re supposed to murder the brutish foes in front of you with as much style and creativity as possible. 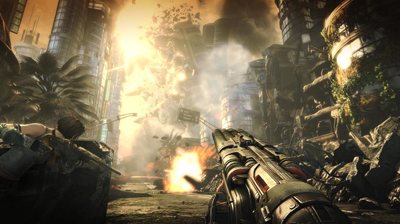 Alrighty, you’re thinking to yourself, so I use my electrical whip to yank this monster over to me, then kick him and slow-motion blast him in the face. Ok, I can do that. The video Gray is narrating flashes by you in two, maybe three minutes, all footage of insane combos utilizing environmental kills to impale baddies, whipping fools up in the air before going noggin huntin’, using crazy ordnance to rack up violent point chains and other relatively over the top antics for a shooter. What the hell is this game?

There is a certain barroom swagger that complements its pulpy sense of self.

Regardless, you half-assedly attempt some loosely creative kills (and really, at this point, you can’t give it any more oomph than that), charging up your sci-fi assault rifle and blasting a guy in the balls, say, or using your whip to knock a bunch of rocks on top on of someone. Then another spate of uglies show up and try to rush you and out of sheer muscle memory you auto-revert to the iron sights shooting of the upteen shooters you’ve trained in for years. (This nets you about ten points per, whereas that “x-ray” special just bagged you around 400.) After a few minutes of fumbling the demo ends (or you die) and you’re left scratching your head.

Bulletstorm may not grab you from this odd little display. (For whatever reason after my demo experience, I decided to take a chance on it when I saw it discounted at Fry’s.) What can be surmised from your first takeaway is that this is a strange twist on an on FPS with a goofy, crass sensibility that may or may not be trying to ape the comedic approach of the original Borderlands (it isn’t). What isn’t cle 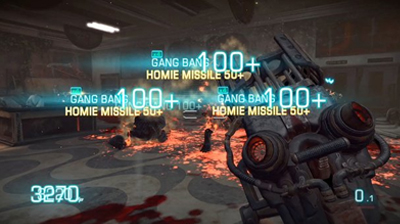 ar is that this is actually an Unreal-powered Tony Hawk’s Pro Bloodbath minus any kind of celebrity endorsement (plus a mouth that needs washing out).

Abandoned resort planet setting aside, Bulletstorm’s essence also makes it a perfect vacation game. Much like Just Cause 2 (a holiday of pure chaos, with grappling hook) or Super Mario Sunshine (the epitomy of Summer-y bliss in game form), when you’re given time to ease into Bulletstorm’s mechanics you’ll find a refreshing break from the standard FPS model. (For one, you might’ve missed in the demo reel that your points are the key to replenishing ammo and getting new, comically destructive weapons, so you’d damn well better learn how to “kill with skill,” as the slogan goes.)

The gameplay flow takes an hour or two to sync up with – enough time for your to start to experience some of Bulletstorm’s ridiculous set pieces, which instead of being taken too seriously are peppered with a running commentary of sarcastic quips and nonsensically profane banter between Gray and his no-nonsense literal AI partner, Ishi. If it weren’t a detriment to one’s reflexes, I’d say this is a game that should be enjoyed kicking back with a cold brewsky or three; there is a certain barroom swagger that complements its pulpy sense of self. 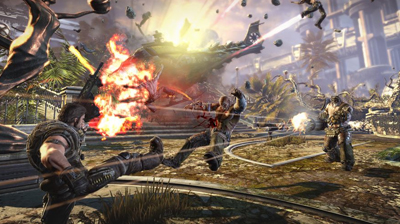 The environments add to the effect. The planet you’ve crash-landed on is balmy and lush with vegetation, and the color palette reacts accordingly, moving from one wide swath of rich tones to the next. Craggy rocks and ruined city structures are bathed in yellows and greens, accented by the occasional tropical vistas (a particularly hilarious exchange between Gray and Ishi takes place overlooking a sunlit dam). Even this world’s hostile assailants run a full spectrum of hues, while the carnage you visit on them pops in satisfying bright dismemberments.

Thanks to Rick Remender’s script, which is maybe about as close as a Western game has come to the immature genius of Suda51’s Shadows of the Damned, Bulletstorm is one of the those games that’s as thoroughly entertaining to watch as it is to play. Once you learn the ropes, the cartoonish violence is joyful in a way that few games match, its mixture of grisly violence and great characterizations the perfect cocktail for a leave of absence. (That its narrative also turns out to be a smart commentary on the futility of revenge doesn’t hurt, either.) I may seek out the most punishing games imaginable because I love the challenge; Bulletstorm is just damn fun. Isn’t that what vacation is all about?