Maxis and EA have officially announced that SimCity 5 is set to arrive sometime in 2013, the first sequel to the popular series of PC games in a decade.

A few of the features to be found in this new release have been announced (although I imagine it’ll be a while before we get all the details): 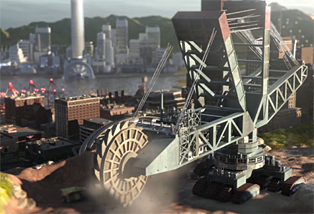 Cities will be more malleable than before, including the revolutionary idea of “curvy roads.”

Multiplayer will be introduced, allowing players to develop regions with their SimCity pals.

Cities can be more specialized, focusing on specific industries or becoming centers for education.

The Sims characters living in your city will also have more elaborate lives, and what they want or do will have more impact on your city’s success or failure.

It’s funny when you think that the original SimCity debuted more than 20 years ago.

I can remember when I was first introduced to the notion of playing God. Of bringing life where none existed. Controlling industry, population, roads and commerce.

It’s funny to think that after all this time, I’m still jazzed by manipulating budgets, levying taxes and making business deals with shopping malls.

Let’s be honest, SimCity is probably one of the more pedestrian games around. There’s no shooting, no fighting, no explosions or excitement. There’s no storyline or adventure.

But there’s just something addicting about it. About shaping and crafting a community into a town and then into a thriving metropolis. The challenges, the obstacles.

Turning Off the Dark With Alan Wake